Animals eat other animals to survive; that’s nature. It’s cruel, but it’s necessary to the continued balance of the animal kingdom. However, some animals, seemingly just to prove that nature will always find a way to freak us out, have a tendency to eat their prey whole and fully aware that it is about to spend the rest of its life staring at a wet wall of muscle.

Here are the top ten animals that do exactly that, starting with …

Snakes eating animals whole is an image so cliché and uninspired that just writing it down here resulted in us having to pay Disney royalties.

However, the limit of what a snake is able to eat seems to have no real upper limit save for how stupid the snake is willing to look (see above image). Since snakes increase in size along with their prey, this has led to stories about snakes eating everything from goats to freaking alligators. The latter of which resulted in the snake exploding because the alligator clawed its way out of the snake’s stomach. Which if we’re honest, only makes us respect alligators more and fear snakes less.

But by far, one of the more insane stories involves a snake that ate a sheep. You may be thinking why is this more insane than an alligator punching its way out of a 13-foot long snake’s gut; well, the sheep was pregnant. Meaning at one point in history, a snake ate a creature with another creature growing inside of it. Russian dolls can suck it; nature has them topped and then some.

Frogs eating things isn’t really that much of a shocker, since they’re literally known for eating things. Every cartoon adaptation of frogs shows them eating flies like rice. That’s thinking small scale though. Not all frogs are tiny little croaking balls of noise; some of them are freaking huge. And when an animal is huge, it has a diet to match. For example, African bull frogs, which can reach almost a foot long, routinely eat mice.

Now we know this is just part of the circle of life, but how many of you reading this honestly expected you’d learn that frogs in the wild will sometimes straight up eat a mouse like it was a piece of pasta?

Pelicans are awesome; they’re like someone combined a handbag with a seagull. How can you look at one and not remember that one saved Nemo? Well, for a start, you could watch this video of one eating a pigeon, and realize that had Nemo not found a friendly pelican to ride with, he probably would’ve been next.

The worst part is, it wasn’t a freak occurrence; after that video went viral, dozens of people stepped forward to say that they too had seen pelicans mouthnap other birds. These are birds remember, as are pelicans, so they’re roughly the same species. This matters not one iota to the pelican, who will gladly and readily swallow a terrified pigeon as it struggles for life in the  belly of a creature who looks like it’s always just about to open its gaping maw and let people see what Hell looks like. But that’s not the only thing birds have to worry about.

Monkfish, despite being tasty as all Hell, are a combination of a toilet lid and Freddy Kruger’s early make-up tests. They look like someone ran a nightmare over in a tank, and drew a face on it.

The fish is well-known for up and eating other fish as it waits patiently beneath a thin layer of sand. One second they’re swimming along enjoying being a fish, and the next they’re YouTube fodder. Sucks to be them. However, according to this source, the fish have also been known to eat sea birds. Basically, imagine the Jaws poster, only instead of a woman swimming it was a bird, and instead of a shark it was a soul-sucking monstrosity.

Turtles are a creature that gets nothing but good press. They’re cute, they’re dopey, they make great ninjas, and they have a mouth that looks like a Predator’s vagina. Well, that food hole is actually quite terrifying, as it’s specifically designed to trap creatures inside it. However, the turtle once again scores brownie points simply because its favorite food is jellyfish, and those things suck. It’s noted that turtles pretty much vacuum up jellyfish whole, eating hundreds of them per day.

Sure, compared to the turtle itself, the jellyfish are tiny, but you have to realize that the turtle is not only sustaining itself on a diet of creatures we humans literally have to piss ourselves to avoid being hurt by, but they do it like they’re chomping down on a box of Chicken McNuggets. Man, turtles are cool.

5. Sharks (Just Not The One You’d Think)

When we saw the word “sharks” up there, even we thought we were going to spend a hundred words talking about great whites. But no; despite his name, Jaws mostly chews his food. However, there is a member of the shark family that eats things whole, and seemingly just to prove that nature hates us, the thing it eats IS OTHER SHARKS.

We can’t really imagine the surprise this National Geographic photographer felt when he snapped a photo of a wobbegong eating another shark. Wobbegong? We’re sorry, but that sounds like an 80-year-old trying to describe the sound dubstep makes. It in now way suits a creature that looks like someone glued sea weed to a failed Pokemon design.

Oh wait, it’s Australian? Now it makes sense. Leave it to those crafty Aussies to give a shark that eats other sharks whole a stupid name, just so we wouldn’t be scared of it. Nice try, Australia.

Owls. Just … owls, man. The worst thing anyone ever did in the history of humanity was putting Hedwig into the Harry Potter movies. Ever since then, millions of people have started seeing owls as cute birds that make great pets, instead of the squawking bundles of terror they are.

Don’t believe us? Check out the video below, featuring an owl literally inhaling a mouse while looking at the camera, in an attempt to make everyone watching it commit suicide. Why is that a good pet? Where are the the scenes in Harry Potter where Daniel Radcliffe throws up after watching Hedwig break the neck of Ron’s pet rat (and exploding as he turned back into Peter Pettigrew halfway through being eaten)? That’s the movie we want to see.

Not everything that eats its prey whole is an animal, as the pitcher plant is all too keen to prove. Normally, the plant traps bugs and particularly stupid spiders inside its pitcher-like maw (hence the name,) after which they’re slowly absorbed and melted down into a gooey mixture that we’re told tastes like McDonalds milkshakes.

However, sometimes other creatures fall for the plant’s sweet, sweet smell. Like mice (damn, mice are dumb.) As this article explains, though the plant exists solely on bugs, it can and will slowly dissolve a live mouse. Presumably just to give us a reason to keep burning down the rainforests. 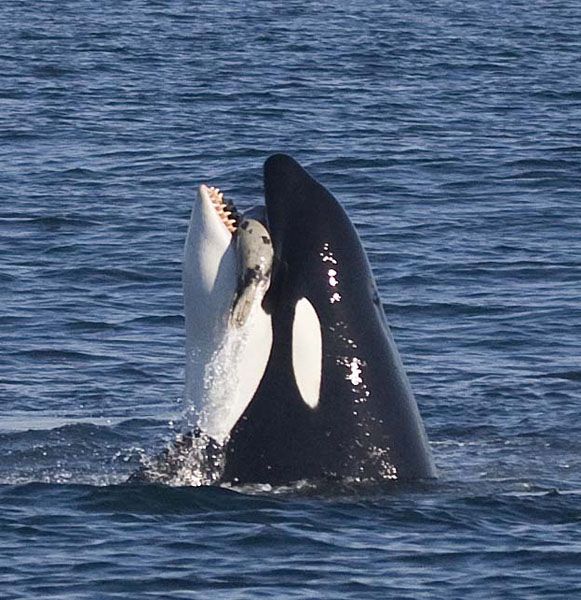 Seeing as whales are so freaking huge, why would it be surprising that they eat prey whole? Well, despite their massive size, most whales actually have very tiny throats. The blue whale, despite being the largest animal on Earth, couldn’t swallow a grapefruit

. And this is a creature with arteries you could swim though.

Killer whales, on the other hand, evolved seemingly just to say screw the blue whale. Along with being one of the few creatures the great white shark is afraid of, killer whales routinely eat seal pups whole. Which, if we’re honest, we should have seen coming, with the whole “killer” part of their name and all. You live and learn, we guess.

We’d like to end on a creature we can guarantee none of you have ever heard of, unless you read about it here. The black swallower (seriously) is an animal so insane, it could only be the result of a drunken bet between God and the Devil to create a creature so absurd it broke the rules of physics.

You see, not only does the Black Swallower eat its prey whole, but it is actively able to eat prey bigger than itself. We’re not talking like with snakes, which can eat prey bigger than their own head. This animal can literally eat things bigger than its entire body. This is because the creature has a huge stomach — so huge in fact, it’s larger than the rest of the creature itself. The result? The black swallower can eat things up to 10 times its own mass. That’d be like any one of us eating a hippopotamus, whole, while it was still alive.

So, just for a second, realize that somewhere out there, there is a creature capable of inhaling animals 10 times it’s own size. Now, try and say we’re the superior race on this planet without laughing.