Weight loss.  It’s one of the most common New Year’s resolutions, the thorn in some of our sides, and the word that fights gluttony on a daily basis.  For some, the simple equation of taking in less calories than you burn on a daily basis usually works and yields visible results.  For others, however, more drastic measures have to be taken, and no we’re not talking about the hours-on-end exercising that contestants are put through on the ever-so-famous show The Biggest Loser.

For whatever reason, due to serious health risks, a true metabolic slowdown, or just mere convenience, people around the world have sought the help of weight loss surgery.  Nowadays there are several types of weight loss surgeries available including sleeve gastrostomy, gastric banding, duodenal switch, and of course gastric bypass, which remains the most commonly performed procedure around the world.

All judgment aside, below are 10 celebrities who have undergone gastric bypass surgery as a means to lose weight and inevitably live a healthier life:

Anne Rice is a well-known writer, known for dabbling in erotica, Christian

literature, and metaphysical gothic fiction.  In January 2003, Rice underwent gastric bypass surgery at a weight of 255 lbs.  Rice had been battling the weight roller coaster for years.  She tried using popular dieting programs such as Weight Watchers and the Diet Center, but she regained every pound she lost.

Due to her excessive weight Rice was suffering from a plethora of health conditions, including sleep apnea and Type 1 Diabetes.  In 1998, Rice went into a nearly fatal coma that was caused by her untreated diabetes, which left her insulin dependent.  In 2003, her husband died and it is said that he encouraged her to lose weight, possibly with the help of surgery, which then prompted her to undergo gastric bypass.

While she was able to lose 103 lbs. in 2004, Rice nearly died again, but this time the problem was attributed to her weight loss surgery.  She was diagnosed with bowel obstruction, which is a known complication of gastric bypass.  Today she has kept her weight off and has continued writing and publishing novels.

Ex-Argentine football (soccer) player, who retired from the sport in 1997, went under the knife in March 2005 in efforts to lose weight.  At one point in time, Maradona weighed over 250lbs, a staggering amount for a 5’4” frame.

Maradona has struggled with weight gain and loss throughout his life and is said to have weighed the most when he was addicted to alcohol and cocaine.  During his ephedrine doping scandal in 1994, Maradona stated that FIFA had agreed to let him use ephedrine as a weight loss drug.  Any truth behind this claim has never been proven, but obviously ephedrine did nothing to shrink his waistline.

He has subsequently lost weight, but the scale still seems to be a problem post-surgery.  In 2009 he checked himself into an Italian spa that provided stress-relief and weight loss techniques in efforts to lose over 10lbs.

If you’re a 90’s music fan, you probably at least know of Blues Traveler and the band’s front man, John Popper.  He is most known for his singing, guitar playing, and most notably his harmonica skills.

Popper was always on the heavy-side of things and was known to have suffered from compulsive eating, and he had the scales tipping at over 400 lbs.  Years of an eating disorder caused a nearly fatal heart attack in 1999, in which an emergency angioplasty was performed.  This ended up being a life-saving surgery as all four of his main arteries were 95% blocked.

In April 2000, Popper underwent gastric bypass surgery and has since lost almost half of his body weight.  In 2002 Popper had lost so much weight that his harmonica belts no longer fit him, so he now uses an attache case. 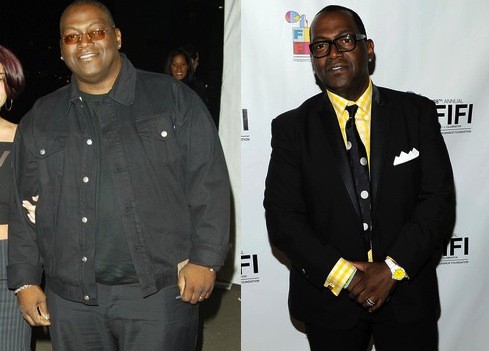 Where there’s American Idol, Randy Jackson is sure to be somewhere close by and, if you’ve ever sat down and watched the show, you’ll note that comparing Jackson’s Season 1 figure to his figure now – there is a big difference.  Though he may have been the show’s biggest hypocrite, offering contestants the idea of losing weight to improve their appearance, in 2003 Jackson decided to take his own advice.

At 329 lbs, Jackson’s health was failing as he was diagnosed with Type-2 Diabetes as well as sleep apnea, two conditions that are commonly diagnosed in people who are overweight.  Failed diets and a lack of weight loss prompted Jackson for more drastic means.

After undergoing gastric bypass, Jackson has lost 114lbs and went from a size 4XL shirt to a size L.  Nowadays Jackson has maintained his healthy figure and has opted to take part in the Hearts Of Diabetes campaign. 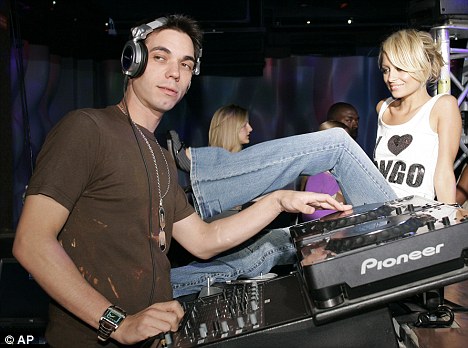 D.J. AM, also known as Adam Goldstein, was a DJ, remixer, and record producer was known for heavy beats and a heavy body.  He is also noted for dating Nicole Ritchie and Mandy Moore.  After a childhood filled with abuse at the hands of his father, Goldstein turned to crack cocaine as a means to cope.  As he said in People magazine, “I was the only fat crack head in L.A.  I would deejay until 2 am, go get drugs and stay up until 10 in the morning doing drugs in my apartment.  Then I would wake up and eat like a beast.”

Such behaviors were not only ruining his potential to become a top DJ, they were also ruining Goldstein’s health.  In 2003, after quitting his usage of crack cocaine, DJ AM went under the knife to conquer his other demon: his weight.  At 324 lbs, DJ AM was obviously unhealthy and, with the help of surgery, was able to drop 150lbs.

In 2008 he was victim of a plane crash that critically injured him and Blink-182 drummer Travis Barker.  The same crash killed four others.  After escaping a possibly lethal plane crash, Goldstein was found dead on August 28, 2009, a death that was said to be a mixture of OxyContin and crack cocaine. For years, the Today Show has involved Al Roker.  He is best known for his daily weather reports and his audience interviews, but before 2002 Roker was weighing in at 320 lbs.  Roker admittedly lost up to 50 lbs. using various diet programs such as Scarsdale, Atkins, Weight Watchers, and Jenny Craig, but that still put him at 270 lbs, which meant he was still extremely overweight.

Roker not only struggled with keeping the weight off, but his bad food habits continued.  A self-proclaimed foodie, Roker would eat two Quarter Pounders, a half dozen Krispy Kreme donuts, and didn’t exercise at any cost.  However, after the death of his father in 2002, and aching knees that were just replaced years before, Roker decided to try weight loss surgery.

While he originally kept his surgery a secret by telling close NBC colleagues that he simply had his gall bladder removed, Roker couldn’t keep his weight loss hidden for too long.  After dropping 100 lbs., Roker was slimmer than ever and he gladly gives most of his success to gastric bypass.  Roker has made plenty of lifestyle changes as he now works out and even ran the New York Marathon. While she may be most infamously known for her singing/shouting of the Star-Spangled Banner in 1990 and her acting on the show Roseanne, she is probably also known for being one of the bigger successful actresses and comedians.  In order to lose weight, as she puts into her own words, Barr “had [her] entire digestive system removed.”  In 1998 she underwent gastric bypass surgery.

Eight months later, after not disclosing what her methods were behind her weight loss, Barr finally spoke on her talk show and told her audience that she lost weight with the help of weight loss surgery.  After starting at more than 350 lbs., Barr has been able to become slim and trim.

Barr now weighs 168 lbs., which amounts to almost 200 lbs. lost.  While she is most definitely thinner, Barr proclaims that she’s still unable to fit into Hollywood clothes as she isn’t a size 0. 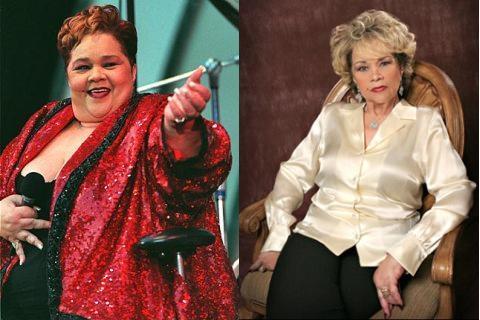 Known for her big and bold voice, Etta James’ body was an equal match.  After becoming a well-known jazz singer for her songs such as “At Last” and “Tell Mama,” James realized that her weight of 400lbs at 5’3” just wasn’t healthy and would possibly be the downfall of her career.  In 2001, after talking to Roseanne Barr the year before, James underwent gastric bypass surgery performed by Dr. Mathias Fobi, which resulted in a 235 lb. weight loss, weight that she kept off until her death.

Though the operation was obviously successful, James claimed that the surgery also brought new problems into her life.  She often complained that her smaller stomach made keeping food down extremely hard.  In fact, she described a cycle of anorexia and bulimia which then caused bouts of depression.

In 2010, James’ health started to deteriorate.  She suffered from a blood infection, dementia, and was undergoing treatment for leukemia.  Despite best efforts to overcome the tough disease that is cancer, in November 2011, it was determined that James was terminally ill and that the leukemia had entered its final stages, news that came just weeks after she released her last studio album.  On January 20, 2012, James died. 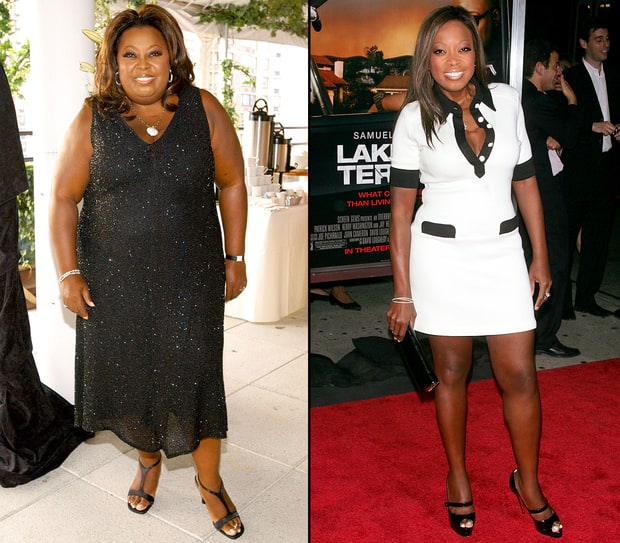 At her highest weight of 307 lbs. in 2003, Star Jones, co-host of The View, decided to have gastric bypass surgery.  Jones’ weight loss may be one of the most controversial.  On-screen, she was known for being relatively open and always shared aspects of her life, yet she literally shrank and shrank before the eyes of thousands, and many didn’t know how.

In the beginning, Jones did not disclose her decision to have weight loss surgery as she said she “was afraid she’d fail.”  She did not want to publically announce her decision before becoming a success story, but she has also mentioned that she does not regret the surgery.  After being unable to walk the stairs, make it through an airport without having to stop, and fearing a possible heart attack, gastric bypass was a life-saving surgery.

Jones dropped from a size 26 to a size 6 in 3 years after losing 160 lbs. as of 2007.  Despite a healthier figure, Jones began suffering from odd symptoms including light-headedness, shortness of breath, and heart palpitations.  In 2010 she was diagnosed with heart disease and required further surgery to repair her aortic valve.

Probably one of the most interesting gastric bypass stories, Carnie Wilson, singer for Wilson Phillips, decided to have gastric bypass surgery in August 1999 after years of fighting obesity, and losing.  At 5’3, Wilson reached almost 300 lbs., and her body was endlessly ridiculed, especially by Howard Stern and Chris Farley on SNL.

The interesting portion of Wilson’s bypass surgery is that her surgery, performed by Dr. Alan Wittgrove, was broadcasted live on the Internet for advertisement purposes, which was viewed by over 500,000 people and subsequently Wittgrove’s tripled patient numbers.

After bypass surgery, Wilson lost 150lbs and went from a size 28 to a size 6. In 2003, she even posed naked in Playboy to show off her new slimmer figure.  But, as time passed, Wilson packed on the pounds again and in 2006 she was featured on VH1’s Celebrity Fit Club, which resulted in a 22 lb. loss – and re-gain.  Her 2011 appearance in “Bridesmaids” portrayed a less-than-thin figure, and in 2012 Wilson vowed to lose weight yet again.