Over the last century, golf has emerged as one of the biggest and most widely played sports in the world.  The rise of golf, both in America and around the world, has brought fame and riches to many, many men, and today it could be argued that professional golf has never been more popular.

It’s really kind of amazing to think about, but three of the greatest golfers in history (Sam Snead, Ben Hogan, and Byron Nelson), were all born within seven months of each other in 1912.  A native of Waxahachie, Texas, Nelson played professionally between 1935-1946 and won 52 times, including five major championships. He was a two-time winner of both the Masters and the PGA Championship, and only the absence of an Open Championship kept him from completing the career grand slam.

Nicknamed Lord Byron, his legacy has remained intact thanks in large part to the Byron Nelson Championship, played annually in Dallas.  Up until his death in 2006, he was present at his namesake tournament virtually every year.  The Nelson Championship is far from the most important event on the PGA calendar, but all you need to know about how the man is viewed by today’s professionals is the fact that the vast majority always make it a point to compete out of respect.

When thinking of the greatest golfers of all-time, you’d probably jump immediately to some of the other guys on this list, like (SPOILER ALERT) Tiger, Arnold Palmer and Jack Nicklaus.  One name you probably didn’t immediately think of, but absolutely should have, is Tom Watson.  The native of Kansas City was one of the most dominant players in the world in the 1970’s and 1980’s, winning eight majors, including five Open Championships, and coming up just short of the career grand slam, having never finished higher than second in the PGA Championship.  What a slacker.

Watson was also aided in his ascendance to the top of the golfing world by a familiar name: Byron Nelson.  Nelson took an interest in a young Watson in 1974, and became his mentor.  It was under Nelson’s tutelage that Watson’s career took off, winning his first career major within a year of working together.

Now, some of you might have expected to find Arnie a little higher on this list, because when you start naming some of the most famous golfers who ever played, after Tiger and Jack, Arnie is likely the next guy you’re going to go to.  And rightfully so, as this working-class guy with the ugly swing would ultimately become one of the greatest and most popular golfers of all-time, with Arnie’s Army following him around every course on which he played.  Arnie won seven majors, including four Masters titles, but what keeps us from bumping him a little higher on this list is the fact that he never won the PGA Championship, leaving his career grand slam incomplete.  But hey, at least he’s got a tasty drink named after him, so he’s got that going for him.  Which is nice.

Now, unlike the other guys on this list, there’s something very unique about Bobby Jones, and that’s the fact that he never turned pro.  Jones competed for his entire career as an amateur, and was insanely successful, bringing home four US Opens and three Open Championships in a seven-year span.  He was also a five-time US Amateur champion and even won the British Amateur in 1930.  And then, at the age of 28, he gave up competitive golf.  His influence on golf didn’t stop there, however, as he helped design a little golf course you might have heard of: Augusta National.  And upon completion of the club, Jones co-founded the Masters.  He came out of retirement to compete in the Masters, but only on an exhibition basis, and played until 1948 before hanging up his clubs once and for all due to his failing health.

Nicknamed Slammin’ Sammy, Sam Snead managed “only” seven majors over his long and illustrious career, but has another pretty impressive record to his name: most career PGA victories, with 82.  In between his numerous golfing victories, Snead also served in World War II, presumably clubbing Nazis with a four-iron all across Europe.  During his career he won the Masters Tournament three times, the PGA Championship three times, the Open Championship once and finished as the runner-up four times in the U.S. Open.

Snead can also distinguish himself from any other male golfer in history thanks to a little achievement he pulled off in 1962, when he entered a field of 15 players and won the Royal Poinciana Plaza Invitational.  What was so special about that particular win? It was an LPGA event, and Snead was the only man in the field, making him the first and only man to ever claim victory in a women’s tournament.  We’d like to believe he competed in drag, but sadly photographic evidence suggests this was not the case. 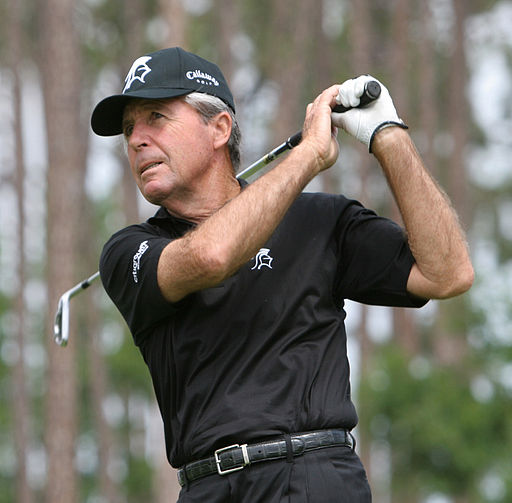 This South African golfer nicknamed the Black Knight, due to the fact that he typically wears all black on the course, is arguably the most successful and famous non-American golfer in history, and in his heyday he was a contemporary and rival of both Arnold Palmer and Jack Nicklaus.  The three waged legendary battles on the course, and Player finished his career with nine major victories, including three Masters titles and three Open Championships.  He’s also the only non-American to have ever completed the career grand slam, and has racked up 165 victories on six continents over the past six decades.  Player has also designed more than 300 courses and written several books, and owns the Gary Player Stud Farm, which sadly does not teach you how to score with the ladies, but is a top thoroughbred race horse farm.

One of the greatest golfers of the first half of the 20th century, Walter Hagen won 11 major championships over the course of his career, good for third on the all-time list behind Jack Nicklaus and Tiger Woods.  A native New York state resident, Hagen became something of a national hero when he became the first American to ever bring home a British Open Championship, and he would go on to win four Open titles in all.  After turning pro at the age of 20,Hagen came up just short of winning a career grand slam, with only a Masters title missing from his resume.

His story is really pretty similar to that of Frances Ouimet, made famous in the movie The Greatest Game Ever Played, in that Hagen was from a working class family and started out as a caddy before making a splash in the professional ranks.  At the time, pro golfers weren’t exactly well regarded at the private country clubs, and Hagen himself was refused entry to the clubhouse at the Open Championship of 1920.  Hagen was instrumental in helping to end the class division in the world of golf, and he had the good fortune of not being played by Shia LeBeouf in a movie. 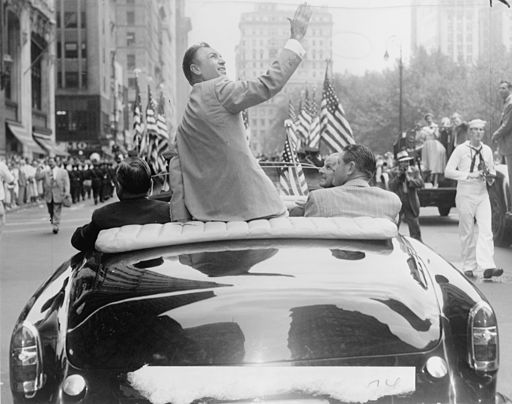 It’s tough to top Walter Hagen for the third spot on our list, but Ben Hogan gets the nod not only because of his incredible talent and success, but because he is often thought of as having the most perfect golf swing in the history of the sport.  No one practiced or prepared more than Ben Hogan, and no one spent as much time working on swing mechanics and technique than anyone who came before him; this has led to people often referring to him as the greatest striker of a golf ball in history.

In 1953, Hogan also put together one of the most memorable single years in PGA history, completing what is now referred to as the “Hogan Slam,” which, believe it or not, does not involve Hulkamania.  That year Hogan won five of the six tournaments he entered, including three major championships.  He ended his career with nine major championships, even overcoming a head-on collision with a Greyhound bus that not only could have killed his career, but the man himself. Now we’re going to go ahead and bet you didn’t see this coming.  Arguing between Tiger and our number one pick, which shouldn’t be a secret at this point, is kind of like trying to decide whether it would be better to hook up with Kate Upton or Sofia Vergara.  Tiger lands at number two, however, for reasons that should be pretty obvious.  Had his career trajectory continued on the same path up until that fateful November night when his life fell completely apart, he’d likely be our number one selection.  As it stands, it’s hard to fathom he will ever be able to catch Jack Nicklaus for the most majors ever won, which only a few years ago seemed to be a mortal lock.  Still, Tiger is truly a once-in-a-generation talent who transcends the game and brings in casual viewers like no one before him. 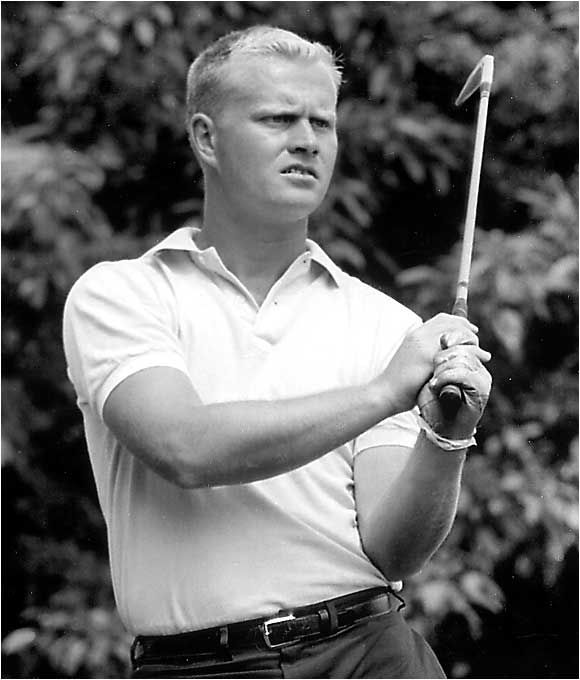 And now that we’ve gotten Tiger out of the way, we can move on to the man he has been chasing his entire life, Jack Nicklaus.  The Golden Bear is, quite simply, the greatest golfer of all-time now that Tiger’s career has been derailed.  Nicklaus is second on the all-time wins list, having racked up 73 victories in his career, including a staggering 18 major championships.  He’s won the Masters six times, with his first and last victories coming an incredible 23 years apart, and has completed the career grand slam four freaking times.

To put in perspective just how dominant the Golden Bear was over his career, he can legitimately say he “only” won the Open Championship three times, since he hasn’t won any other major fewer than four times.  We’re going to go ahead and chalk that up as complete and utter domination, and give the Golden Bear his rightful place as the greatest golfer of all-time.