The Celts are an often misunderstood people. Originating from Austria (circa 1200 BC), they spread across Europe as far as Britain and Spain-and even into Asia Minor, as seen with the Galatians. They were renowned warriors, noted in Greek and Roman literature. However, there is a bias against the Celts that continues into the modern era; subsequently the culture of the Celts is often overlooked. So this list stands as a testament and also an introduction to Celtic culture.

The statue of Tarasque de Noves stands as a fearsome tribute to the Celtic deities. It is often described as a lion

or a wolf, but would appear to be an amalgamation of several animals: lizard, bear or lion, and human (we can tell it has human attributes as it is seated kneeling).

It holds in its claws two typical La Tene style human heads, quite possibly the skulls of his enemies. Protruding from its jaws is what appears to be a human arm.

Found near a French Cemetery in the nineteenth century, it dates back to around 200 BC- placing it in the La Tene cultural/artistic movement.

It is one of the most imposing of all of the Celtic statues, and probably stood as a warning to other tribes in the area. It reflects the tenacious warrior nature that was ingrained in the Celtic culture and shows the zoomorphic character of Celtic deities.

The Battersea Shield is one of the more iconic images on this list. This is one of only two British entries. This Ornate shield was found in the area around Chelsea Bridge, London. The shield is almost certainly ceremonial owing to its thinness and lack of visible battle damage.

Dated to 350 BC, it seems that an object this elaborate would belong to a member of the warrior elite or even a Celtic chief.

Like the first item on this list, the Battersea shield is from the La Tene era which is characterised by the spirals, circles, interwoven knots and lattices that remain in modern Celtic art.

How it came to be deposited in the Thames is hotly debated in the archaeological world. The primary theory suggests that the shield was a votive offering, possibly to appease the river. Evidence for this practice is common in Prehistoric societies and is prevalent at the culture defining site at La Tene, France. Many spear heads and swords were found deposited in the Lake there which helps to support this theory further.

The Glauberg site near Hesse, Germany is an ancient Celtic Oppidum (town/social centre) and contains a monumental burial mound dating to around 500 BC. This style of burial was common throughout the Celtic world and often signified a chief or a member of the warrior elite.

This statue, crafted from sandstone, depicts a Celtic warrior complete with tunic and trousers; he is also equipped with a sword and shield which suggest seniority. The sculpture is believed to be an accurate likeness of the interred prince, as the figure is decorated in jewellery excavated from the burial mound itself. You can make out the three-pronged Torc, a kind of solid necklace, around the Prince‘s neck.

This piece is almost unique as there are very few examples of Celtic statues surviving into the modern era and, even more unusually, it gives insight as to how the Celtic prince may have dressed. Another area of debate is the ostentatious headdress that the Prince would appear to be wearing. Many believe it to be a representation of hair as the Celts were noted to use tree sap and lime in their hair, and it was also back combed to make it look larger and more fearsome. Others believe it is akin to a halo and that it was a religious symbol.

The seventh item of interest on this list shows a side to Celtic culture that is often overlooked; the Celts are oft portrayed as barbarians only interested in drinking and fighting. This mirror alludes to another facet of Celtic culture: fashion and grooming. This artifact has an intricate swirling design that may have been mapped out with a compass, which is typical of La Tene art. There are several faces hidden in the design that had not been discovered until a while after its initial excavation and examination.

The level of detail certainly indicates the prestige of the owner and also sheds some light on Celtic culture. Roman historians would have us believe that the Celts were an uncultured people, however this artifact proves they also would appear to have an interest in personal hygiene and appearance. Dating to 100 BC, the mirror accentuates the social standing of women in Celtic Society, indicating that they may have had a similar role to that of Anglo Saxon women holding authority over men in certain social situations. 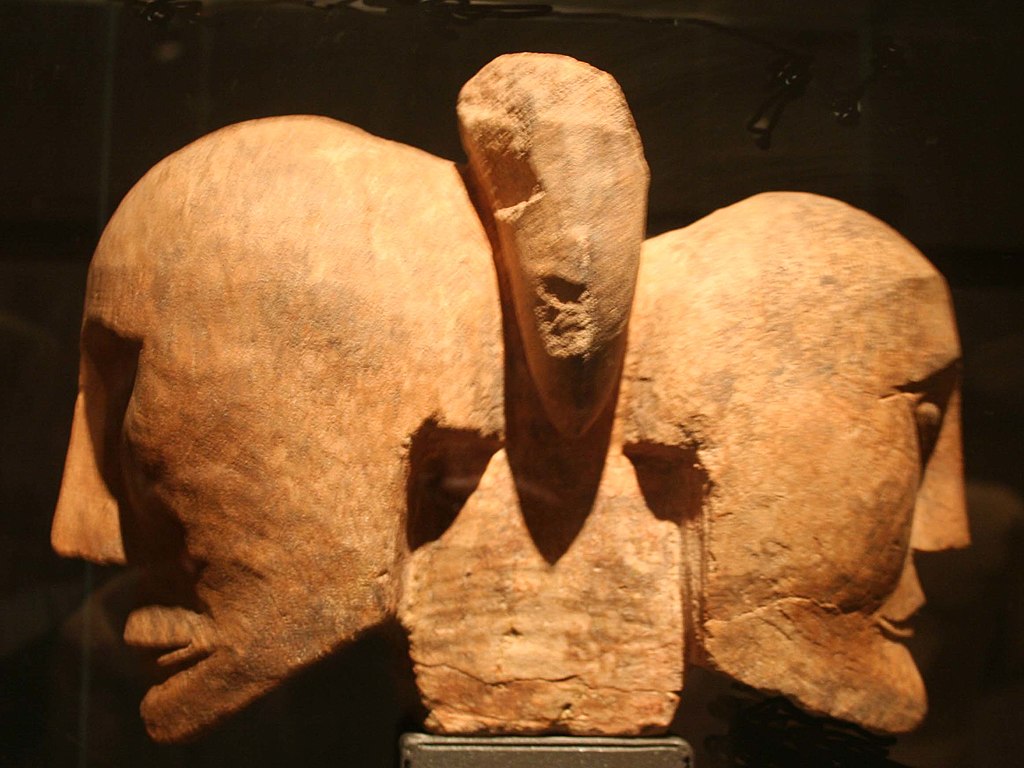 This statue is one of two entries from Roquepertuse, a Celtic religious centre which is located near the ancient trading hub of Massalia (modern day Marseilles). Romano-Celtic trade was heavily dependent on this Greek colony. Roquepertuse itself was an important centre for Celtic people between the years 600Bc – 124Bc. The Janiform head (janiform means there is a face on both sides) is a small bone of contention in the archaeological world with various theories surrounding its religious significance- many of these tenuous.

This figure may be related to the Irish deity Lugus whom is also depicted with two heads or faces.

All that can be said with confidence is that the head was considered a significant religious symbol in the Celtic world, but Im going to save more information about the Celtic love affair with the cranium till item number three. These flagons (they come in a pair) which are currently on display in the British museum are some of the finest examples of Celtic craftsmanship in existence; they implement several significant aspects of Celtic art such as Zoomorphic characters and knot work.

Rivalling that of some Grecian urns, these vessels date back to around 450 BC.

Made from bronze, much of the detail (such as the wolf and Celtic knot work) is inlayed enamel and coral and mosaic, which suggests significant skills and vast trading networks were involved in the creation of these flagons.

The would have been used during feasts or symposiums and are an object of high social status, so we can assume that the owner of these was in a position of power. Sadly these objects were robbed from their sites so not much is known about the history of them or whom they belonged to. This remarkable cauldron was unearthed in Denmark near the parish of Aars. One of the younger entries on this list, the cauldron only dates to around 100 BC; this however means that we know much more about this piece. Fashioned from solid silver it is believed that this cauldron was constructed from smelted coins, more than likely roman coins. It is constructed from individual plates joined together, each with an individual theme. The central plate depicts a female wielding a sword,  the rest of the plates depict woodland real and mythical creatures such as stags and dragons. These plates also show zoomorphic deities from Celtic mythology. One of the most notable of the plates depicts a horned figure surrounded by wild life. It is likely that this is the woodland god Cernunnos who was renowned for his ability to metamorphose into woodland animals. Also noted as the lord of wildlife, he is one of several gods portrayed on this piece. It is likely that this object was involved in the rich drinking culture of the Celts. 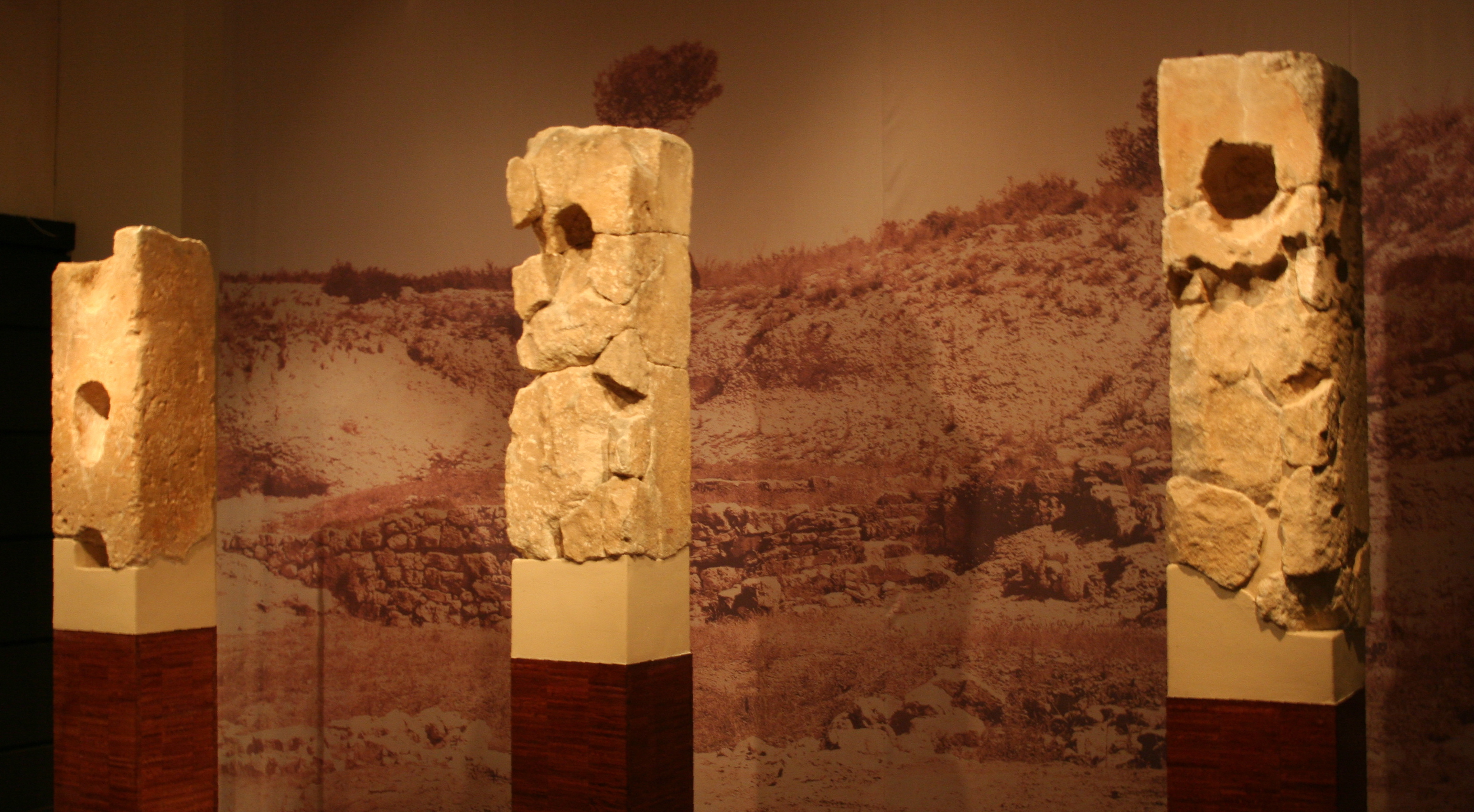 Item three is my favourite on the list. Dramatic and sinister, these pillars are the second entry from the Roquepertuse sanctuary. The pillars display the darker side of Celtic culture. Cassius Dio and other Roman writers often portrayed the Celtic people as cruel and barbaric, and however biased the Romans might have been, it is hard to ignore some of the evidence present. Dio mentions Cannibalism and others mention head hunting, and it is widely acknowledged that the Celts took the heads of their enemies. However it wasn’t just their enemies, they also valued the heads of their friends and family or livestock.  Some heads were buried or displayed at the entrances of farmsteads, and these pillars may be a similar but more elaborate example. They were certainly part of a doorway, and contain niches carved for skulls. Very little is known of the skulls themselves, and on the surface this could be seen as barbaric, but this seems unlikely as the site is ritually significant. It feels as though the skulls are being venerated like in an ancient Neolithic ossuary, where bones of loved ones were revered and worshiped. It is possible that the skulls were those of druids or chieftains.

Another monumental burial is the Hochdorf Burial in Baden-Wurttemberg, Germany. Like the Glauberg site, this burial contained many varied and valuable grave goods. The dagger is an exquisite piece of Celtic workmanship, the core was made from bronze and iron and it was plated with gold. Its hilt is particularly interesting as it seems to mimic a religious symbol; the cross legged man with his arms pointing toward the sky, Cernunnos the stag god can be seen seated in this position on the Gundestrup cauldron. The dagger is just one of several artifacts from this tomb including a couch with seated men as feet, Gold plated slippers, a giant drinking horn, and a large cauldron no doubt used in feasting. It seems obvious that the dagger was for ceremonial use as there are no signs of damage or use and gold is not a functional metal as it is too soft. However the value of these items and their rareness suggests that the Hochdorf chieftain was an important figure socially. 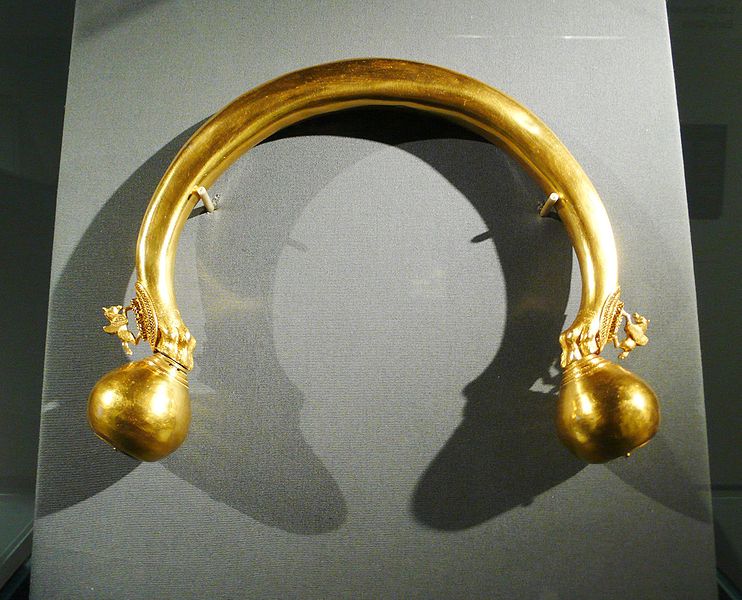 This voluminous jewelry was found in the grave of a powerful women, consisting of 40 individual parts. The two spheres at the ring terminals are held in the paws of lions. The two small winged horses are reminiscent of Pegasus from Greek mythology and bear witness to increased contact with the Mediterranean world.

The Vix burial is without doubt the grandest of all the monumental princely burials from the Celtic era. It seems that Vix had a powerful position in the Iron Age world, and good relations with their classical contemporaries to the south. The Vix burial contains the largest symposium/feasting related artifact of its kind; the Vix Krater. The Krater, a giant urn, is probably more famous than the Vix Torc however it was constructed in Greece and this list is purely Celtic. At about the size of an Austin Mini, this artifact alone suggests the power that Vix commanded. The Vix Torc (pictured) however is just as grandiose as the Krater. Made from 480 grams of solid 24 carat gold, it is both a valuable and beautiful piece of Celtic art and culture. Dating from 500Bc the Torc is decorated with winged horses and intricate knot work so small that you can barely see it in this photo. This is probably the most valuable Celtic Torc in existence. The term princely burial is a little misleading as when they opened the tomb, the Vix Torc was still hung around the neck of a dead woman interred there. This site changed how historians perceived Celtic culture and is without doubt one of the most important sites in Celtic history.