Indian food is distinctive and delicious, containing a unique blend of herbs and other exotic flavors and spices. This top ten list describes some of the most common tastes to look for in Indian cuisine Try all ten and expand your palette for eating and cooking the delicacies of India.

Looking to create a few Indian dishes? These top 10 hallmark spices of Indian cuisine are ones that you’ll want to shop for at the international market in order to get started:

10. Spice It Up With Turmeric

Turmeric is an Indian spice, bright yellow in color and is used in both south and north Indian cooking. It is derived from a plant native of India that is part of the ginger family. It is made from the boiled, dried, cleaned and polished roots of the turmeric plant. In medieval Europe it became known as Indian saffron and was far more expensive in its day than the saffron spice of today. Turmeric is used primarily in Kashmiri dishes. Used for flavor and color, it is a principal element in curry powder.

9. The Sweet Aroma of Coriander

Coriander powder, known in India as ‘Dhaniya’ is purchased as whole seeds or in powder form in both south and north Indian cooking. Fresh coriander is also known as ‘cilantro’ to many. The seeds are often used as a condiment with or without roasting. It is a herb with a delicate sweet aroma and it is an essential spice in every Indian household. It is used in Indian Dals (dried legumes and pulses), Rasam, Sambar, soups and curries. The fresh coriander leaves are generally used as garnish on top of finished dishes. Native of the Mediterranean, coriander is produced in India and in many other countries. The oil is used in seasonings for sausages and other meat products.

8. Cumin, An Addition To Indian Curry

Cumin, known as ‘Jeera’ in India, can be purchased as whole seeds or in powder form and comes from a dried, white fruit on an annual herb that is a tropical plant grown in many parts of the world. The seeds are bitter and have an aromatic odor. It is indigenous to northern Egypt, Syria, the Mediterranean region, Iran and India. It is also grown in Mexico, China, Sicily and Malta. Cumin is used in Indian cooking as a flavoring agent in things like curry powders, seasonings of breads, cakes and cheese, and as a condiment. It is also used in many native dishes of Central and South America. Used in small quantities in most dishes it merely enhances the dish further. It is found to date from the second millennium B.C. All Indian curries and dals include it in small quantities. Often the cumin seeds are heated and roasted which gives off its robust flavor and aroma. Cumin can be used in powder form but is best used with the seeds.

7. The Full-Flavor of Mustard Seeds

Mustard seeds come from an annual herb cultivated as an oil seed crop, vegetable, condiment and spice. They are either tiny black, pale yellow, white or brown balls that release a full flavor when roasted. After being heated they ‘pop’ and release a rich flavor. They are used in south Indian cooking as part of the Tadka (a cooking technique where you cook whole seeds in oil to heighten flavor). The yellow/white mustard is native to southern Europe whereas brown mustard is from China and was then introduced to northern India. Black mustard seeds come from the southern Mediterranean region but are cultivated around the world. Powders are also used in mayonnaise and leaves of the mustard plant are used either dried or dehydrated for taste in recipes as well. Ground mustard is used for flavor in Bengali fish curries.

6. The Predominant Flavor of Curry

Curry leaves come from a tree and curry is used as a spice to add fragrance and flavor to southern Indian dishes. It is a spicy ingredient and can be used dried or fresh and is grown throughout southern India. Curry is often used as a sauce in many Indian recipes and is also used to marinate tandoori and tikka kabobs.The curry tree is used not only for its leaves, but the bark and roots are known as a tonic and a stimulant. Research indicates that curry has existed since before the birth of Christ. Curries have taken shape around the world since then with each country creating it in their own unique way.

5. The Sourness of Tamarind 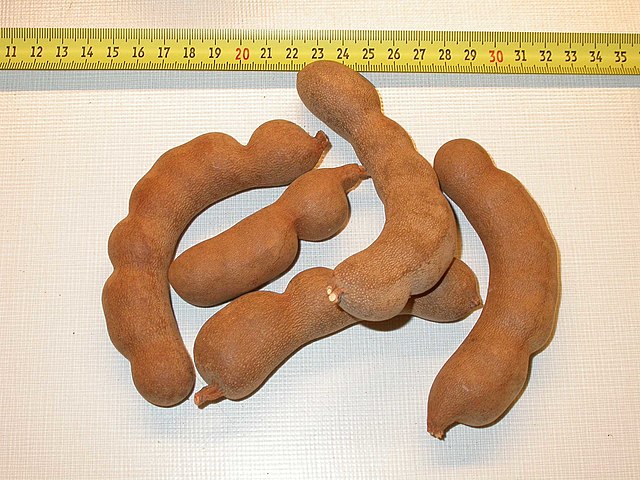 Tamarind paste is made from the ripe fruit of the tamarind tree, an evergreen. It is a tree that originates from Madagascar and the tamarind pulp is used in many culinary Indian creations. The tamarind kernel powder is extensively used too. It is used as a condiment in India and is widely cultivated there and in other semi-tropical regions with low rainfall. It has a sour and acidic taste and is used in south Indian dishes to give taste. It usually comes in a concentrated paste commercially.

Cinnamonis derived from the bark of a hardy, evergreen tree and is native to India. What is known as the ‘true cinnamon’ or Sri Lankan Cinnamon is the dried inner stem bark of the Cinnamomum Verum. They are grown as bushes and are ready for harvesting after two years of growth. Cinnamon oil comes from the bark of the tree. Cinnamon sticks are used in Indian cooking for the preparation of Pulao (Pilaf), Biryanis and certain curries. Chips or ‘quills’ are scraped peel of the inner bark of the mature cinnamon shoot which is dried in the sun and then in the shade. The fragrance is sweet, earthy and a warm enjoyable taste. It is also used as a powder in cooking as well as in dried sticks.

3. The Resin of Asafoetida 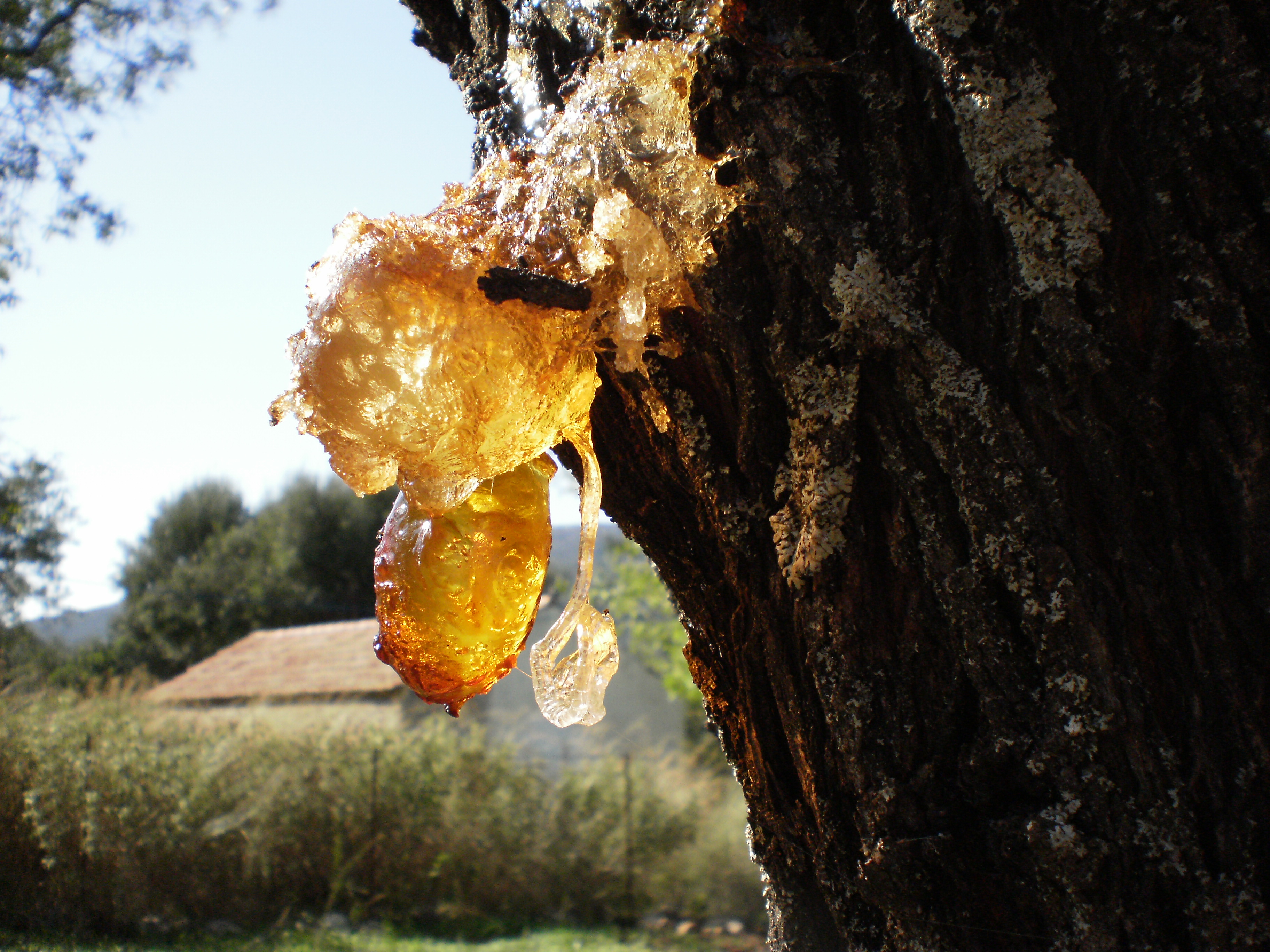 Asafoetida, strangely known as ‘the devil’s dung,’ is known for its pungent odor. It is the dried latex or gum exuded from the living underground rhizome or tap root of several species of Ferula, a perennial herb which grows in India (although it originated in the Americas). It is prepared from the sap of a plant which is dried into a grayish resin and is quite hard and needs to be broken down with the help of a hammer or other tool. It is used as a condiment and flavoring agent in Indian food. It gives the unique flavor to Rasams and Sambars of southern India. It is grown in Kashmir and in some parts of Punjab in India but India is supplied with it mainly from Afghanistan and Iran. There are two main varieties both of which are acrid and bitter and give off a disagreeable unpleasant odor due to its sulphur compounds. It is mixed with starch and gum in a block or in powder form. It is used in flavoring Curries, Sauces and Pickles.

2. Black Cardamom, the Queen of Spices 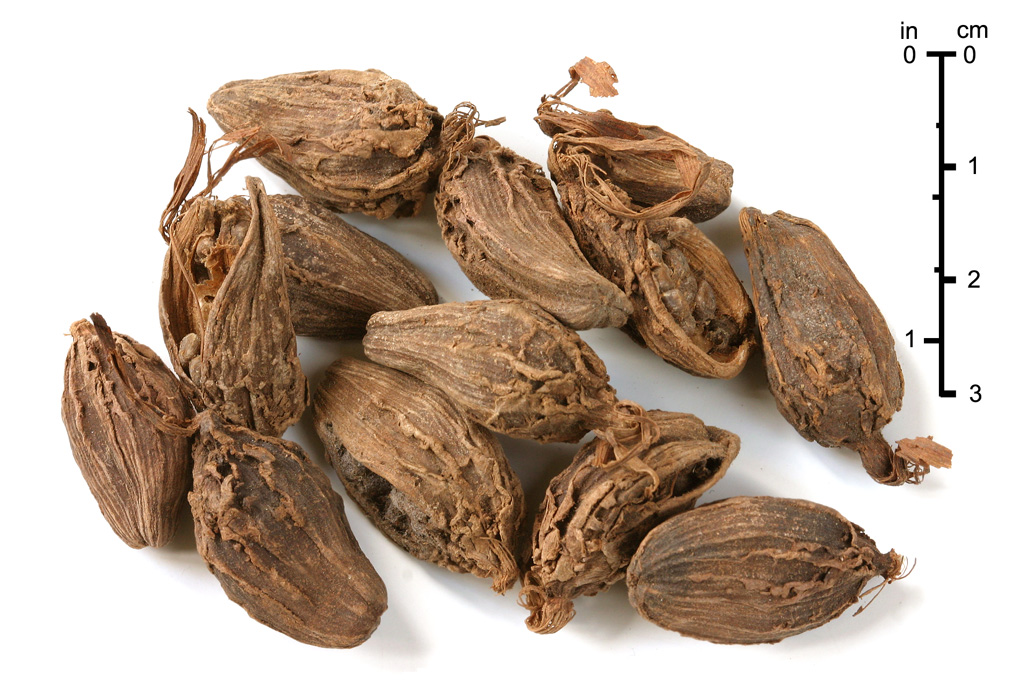 Black cardamonis known for its smoky, pungent aroma and is used in many Indian dishes. It is the dried ripe fruit from the capsules of the cardamom plant, often referred to as the “queen of spices” because of its pleasant fragrance and taste. Different from the green cardamom, the black cardamon is used in the preparation of Dals, Curries, Biryanis and the famous Indian Garam Masala or ‘hot spices’ which not only include Black Cardamon but bay leaves, black pepper, black cumin, cinnamon, cloves, mace and nutmeg. The pods are released just before adding to a dish. Cardamon oil is a precious ingredient in many food preparations including Indian beverages. Cultivation is concentrated in the evergreen forests of western Ghats in south India. It is grown on a smaller scale in other countries as well. It is used in both whole and ground form. Cardamom oil has applications in flavoring processed foods, cordials, and liquors and in perfumery and in Ayurvedic medicines (a traditional Indian medicine system popular in Southeast Asia). Red chili powder or cayenne pepper adds a spicy kick to Indian food and is known as the “king of all spices”. Chili is the dried ripe fruit of the genus Capsicum. It is believed to be native to South America, first introduced to the Indians from the Portuguese in the 15th-century. Today it is used in the infamous Indian curry dishes.