When eating, we generally find food that we think tastes great. Others like to focus on how healthy a certain food is before eating it. In any case, food is essential to all of our being. It is speculated that the body can only last two weeks without eating before it starts to break down due to lack of nutrients. Of course this number changes, depending on body mass, weight, etc.

However, have you ever stopped to think, while shoving a nice red ripe apple into your mouth, that you may be eating something poisonous? Many don’t know it, but a lot of the common day foods that we eat are toxic! Here is a list of ten toxic and poisonous foods us humans just can’t say no to. 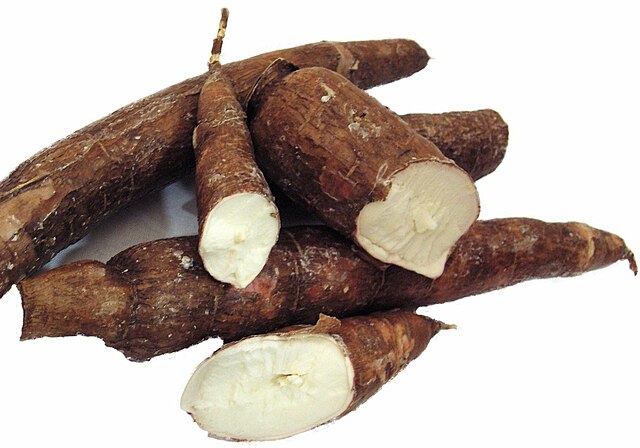 Though not too widely used in the United States, cassava is a woody shrub that is generally found in the Caribbean and South America. When using cassava, it can either be made to be sweet or bitter. The taste, as well as the smell, all depends on the amount of cyanogenic glucosides, which are in fact, extremely poisonous. Most who prepare it like it to be bitter, as it keeps away insects and even animals. If cassava is prepared incorrectly, it can be deadly. Cassava poisoning, due to high levels of cyanide

, is known as Konzo. Cassava poisoning leads to irreversible paralysis. Photo by AdamCohn

Interesting fact: Cassava roots are ground into a flour-like substance which is then used to make tapioca. Cassava leaves contain cyanide but if pounded into a paste with flour and left in the shade for 5 hours, the cyanide is broken down.

Pufferfish stand to be the second most poisonous vertebrate in the world. Though you won’t find pufferfish in the U.S., many in Korea as well as Japan find some parts of the fish to be delicacies. However, certain organs of the fish, such as the liver, as extremely toxic, and can be deadly. The poison in the fish, known as tetrodotoxin, can cause numbness, high blood pressure, and muscle paralysis, which is what leads to death as the diaphragm muscles become paralyzed, disabling breathing. Known as fugu when eaten as a meal, many in Asian countries refuse to stop eating the fish.

Interesting fact: Pufferfish has been made illegal to be eaten by the Emperor of Japan. 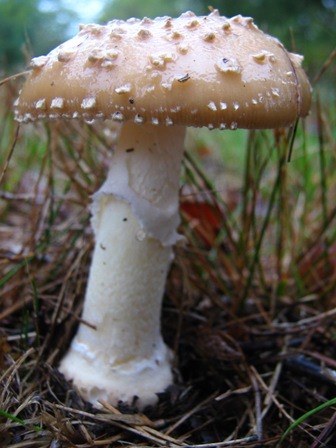 There are about 5000 types of mushrooms known in the U.S. and about 100 of them are said to be toxic, while less than a dozen are deadly. In any case, mushrooms can cause gastrointestinal discomfort.  Since mushrooms are fungi and the fact that there are so many species, it can be hard to know which are poisonous. As rule of thumb, it is usually said that any mushroom found in the wild are more than likely poisonous. One of the deadliest types of mushroom toxins is Alpha-amanitin, which causes extreme liver damage. Toadstools, as they are called, are the poisonous mushrooms.

Interesting fact: There are 38,000 known kinds of mushrooms; about 5% of these are toxic. Though really seeds and not nuts, cashews grow inside of a shell-like structure that grows on a fruit. When buying “raw cashews” in the store, take note that these nuts have actually been steamed and are not entirely raw. This is because raw cashews contain urushiol, which is the same chemical that you’d find in poison ivy. It can cause the body to have a very similar reaction to one experienced from poison oak or ivy. If a high level of urushiol is ingested, it can be deadly. Cashew poisoning is rare, but those who handle them in order to manufacture them to get the shell off sometimes experience the side-effects.

Interesting fact: Cashews come from a fruit, which in South American countries, is eaten, and the seeds (cashews) are then thrown away.

You’ve probably eaten a chili or two in your life. No matter if it was an extremely hot one, or one that was pretty mild, every chili you have ever consumed has contained a chemical called capsaicin. In chilies, capsaicin is what makes them spicy and “hot.” Of course one chili won’t hurt, but if you eat enough of them, capsaicin can kill you. The chemical is so strong that it is used as a paint stripper, and it is even used in pepper spray used by police forces. In hotter chilies, such as habaneros, capsaicin can be felt on the skin if you cut the chili, as it will produce a burning sensation.

Interesting fact: Chilies are extremely high in Vitamin C. One green chili pod is said to contain about 6 times as much Vitamin C.

We’ve all heard something or another about potatoes. Whether it is the potato famine, some Irish story, or some other historical event centered on potatoes, one thing you may not have heard of is that potatoes are toxic. The stem and leaves of the plant are toxic, and even the potato itself is toxic. If you’ve ever looked at a potato, you may have realized that some turn a greenish color. This is due to levels of glycoalkaloid poison. In the past, there have been deaths due to potato poisoning. It is rare, but most happen due to someone drinking potato leaf tea, or eating green potatoes. Death doesn’t come suddenly. It usually results in weakness and then a coma. Don’t worry about having the occasional green potato chip, but do discard any potatoes that have green eyes, sprouts, or greenish skins, rather than prepare and serve them, especially to children.

Interesting fact: Potatoes make great food for astronaut! In fact in 1995 potato plants were taken into orbit on the Columbia and actually grown. 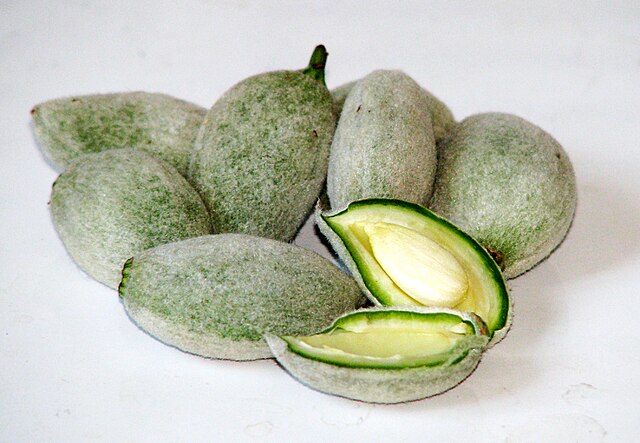 Almonds, most always said to be nuts, are actually seeds and are extremely popular in kitchens around the world. Much like cashews, almonds are extremely poisonous if not introduced to some sort of heat source. It is generally the bitter almonds that need to be treated to get rid of the poison. The seeds are full of cyanide, and in many countries are illegal to sell without having been processed in order to get rid of the poison within the seed.

Interesting fact: Almonds are said to be one of the earliest cultivated foods, being mentioned in the Bible’s Old Testament. 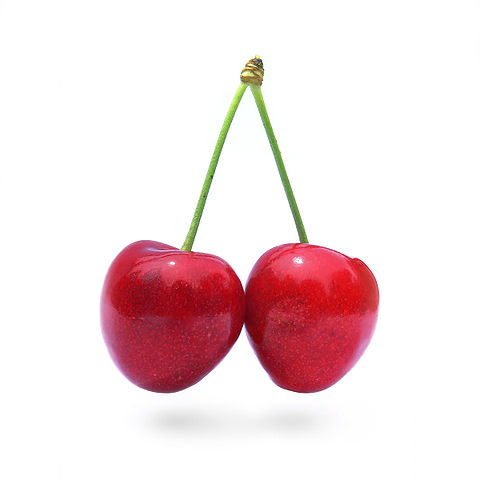 Cherries are definitely one of the most versatile fruits. You can eat them raw, cook them, bake them, and get them tart or sweet. Cherries can even be used in certain types of liquor. Despite their overall red goodness, cherries are toxic. If you’ve ever eaten a cherry and without thought chewed on the pip or left it in your mouth, you more than likely introduced hydrogen cyanide into your body. If a cherry pip is chewed, crushed, or somehow damaged, it automatically produces hydrogen cyanide. Symptoms of mild poisoning include headache, dizziness, confusion, anxiety, and vomiting. Larger doses can lead to difficulty breathing, increased blood pressure and heart rate, and kidney failure. Reactions can include coma, convulsions, and death from respiratory arrest.

Interesting fact: Cherries contain extremely high amounts of Melatonin which is good for helping and keeping the body regulated.

Apples are definitely a popular fruit no matter where you go. Like others on the list, and many other types of fruits, apples contain cyanide, but not in high levels. The fruit itself does not contain the chemical, but you will find cyanide in the apple’s seeds. Eating all of the seeds in one apple won’t kill you, but it’s definitely not recommended. Of course, if enough apple seeds are eaten, this means chewed and swallowed, it can result in complications.

Interesting fact: Apples float because at least 25% of their mass is nothing but air.

Despite the extreme popularity of tomatoes and many countries, it is true that they are poisonous. Though the fruit itself doesn’t contain poison, the stem as well as the leaves contain a chemical known as glycoalkaloid. Higher levels are said to be found in wild tomatoes, but those grown domestically still contain glycoalkaloid. This chemical is known to cause upset stomachs and nervousness. The leaves and stem can be used in cooking for flavor, but must be removed before eating. This chemical is so powerful that it is actually used as a way to control pests.

Interesting fact: In 1893, in the U.S. Supreme Court case Nix v. Hedden, it was argued whether or not a tomato was a vegetable or a fruit, which dealt with taxes being paid on vegetbles and not fruits. In the end, the court ruled that a tomato is a vegetable when referring to the Tariff Act, but is botanically a fruit.