United States Presidents are people like you and me, who lead daily lives and have everyday likes and dislikes, but rarely do we picture them as such. To many, the President is the executor of national laws, the Commander-in-Chief, a diplomat, the key legislator, and various other roles that require plenty of other hats. But, how often do you see the President fitting into the role of an athlete? An author? What about a musician? With President Obama’s recent musical performances that didn’t have any vetoes coming from the audience, have you thought about just how many Commanders-In-Chief also have worn the Musician-In-Chief hat?

Out of the 44 presidents thus far, below are ten of the most musically-inclined:

Warren G. Harding was well-liked by a large majority of American society (in the beginning, anyway) due to his conservatism-based ideas, which were a change from the progressive movement that had shaped the government and the country for President after President. Aside from being a breath of fresh air in the White House, Harding also had a bit of a musical bone in his body, as he was the organizer of the Citizen’s Cornet Band, a band made available to be used at Republican and Democratic rallies. According to Harding himself, “I played every instrument but the slide trombone and the E-flat cornet.”

In addition to being the 6th president, and the son of a Founding Father, John Quincy Adams was also a skilled flutist. His love of the flute was more than likely influenced by his time spent in London, Paris, and Berlin: cities where music was always praised, enjoyed, and a large part of everyday life. During his time as a student at Harvard University, Adams created various music compositions meant specifically for the flute, some of which were entitled “Lesson by Morelli” and “York Fuzileers.” While the flute isn’t the manliest musical instrument, does it much matter when you’ve ended wars, annexed land, and all but told a King to “shove it?” 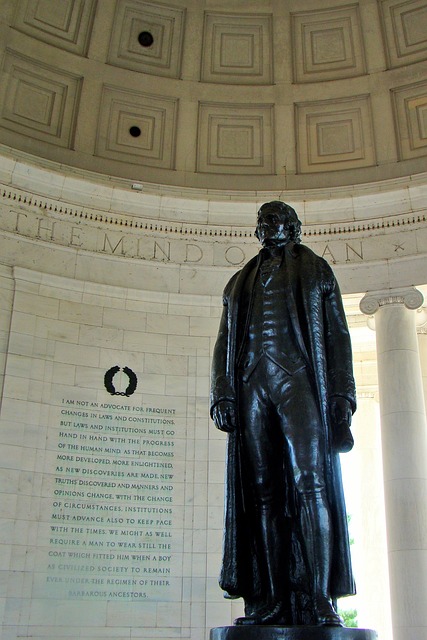 History books paint him as being a Renaissance man, and this term truly embodies all that Thomas Jefferson was. As the third U.S. President, Jefferson is praised for doubling the size of the country, negotiating treaties to end the Revolutionary War, and plenty of other great accomplishments. Though his success as a President is worth mentioning, aside from being President, Jefferson embraced the art of music. In fact, Jefferson’s vast music library can be found at the University of Virginia.  During his time, Jefferson played the clavichord, the cello, and the violin. In 1785, Jefferson proclaimed that music was “an enjoyment, the deprivation of which cannot be calculated.”

Music, and its importance, ran throughout Jefferson’s life. as his wife too had a love of arts. Martha was a guitarist and pianist, a connection that was sure to strengthen the marriage between the two.

One of the first Presidents to push hard for the annexation of Texas, it’s only ironic that the state’s most famous city, Austin, would become known as the “Live Music Capital of the World.” As a child, Tyler dreamed of becoming a concert violinist, after being taught to play for years by his father. Despite his love of the violin, Tyler decided to study law, which landed him the job as the 10th US President. After his Presidency ended, Tyler retired and found himself spending most of his free time playing the violin and fiddle. He commonly held parties, in which he would entertain guests with his talent. At times Tyler and his wife Julia, a guitarist, would duet. With 15 children to take care of, some have even said that Tyler organized his kids into a minstrel band.

When thinking of past U.S. Presidents, Chester Arthur probably isn’t one that comes to mind very often. Though most notable for his sideburns, his run as the 21st president only came after President James A. Garfield was assassinated. After one term, Arthur declined to seek reelection, due to failing health. If there’s one thing Arthur can be noted for though, it was his love of playing the banjo. As an outdoorsman, Arthur would typically spend a lot of time playing his banjo.

Woodrow Wilson grew up playing the violin though, once he got older and approached adulthood, he found that his passion become more of a pastime. Instead of taking hours to play the violin, fiddling around was now a more appropriate term. Even though politics, and an eventual Presidency, took reign, Wilson never lost his appreciation for music. In fact, during World War I, Wilson was quoted as saying, “Music now, more than ever before, is a national need.” Instead of calling for America to look elsewhere for comfort and morale, Wilson knew from his childhood, that music would be able to pull society through the darkest months of WWI.

Sadly, there are no recordings or videos of Wilson playing violin, so we can only imagine what his talent level was truly like.

At the young age of 10, Harry Truman found himself awake at the wee hours of the morning, sitting behind a piano, and practicing for at least two hours. His favorite composers consisted of Chopin, Mozart, and Beethoven, though his skills weren’t quite up to par. After five years of hours upon hours behind the piano, Harry randomly quit his lessons, after realizing that he just wasn’t good enough to become a famous pianist. During his Presidency, Truman was often quoted talking about his passion of playing the piano. As he once said, “My choice early in life was either to be a piano-player in a whorehouse, or a politician. And to tell the truth, there’s hardly any difference.”

Despite his love of politics seemingly taking the forefront over his passion for piano, Truman was able to combine the two. In 1952 he played, during a televised tour of the White House. He had also shown his talents at festivals, and even played a tune for Joseph Stalin. It has also been noted that Harry and his daughter Margaret would sit and play the piano together during his spare time. 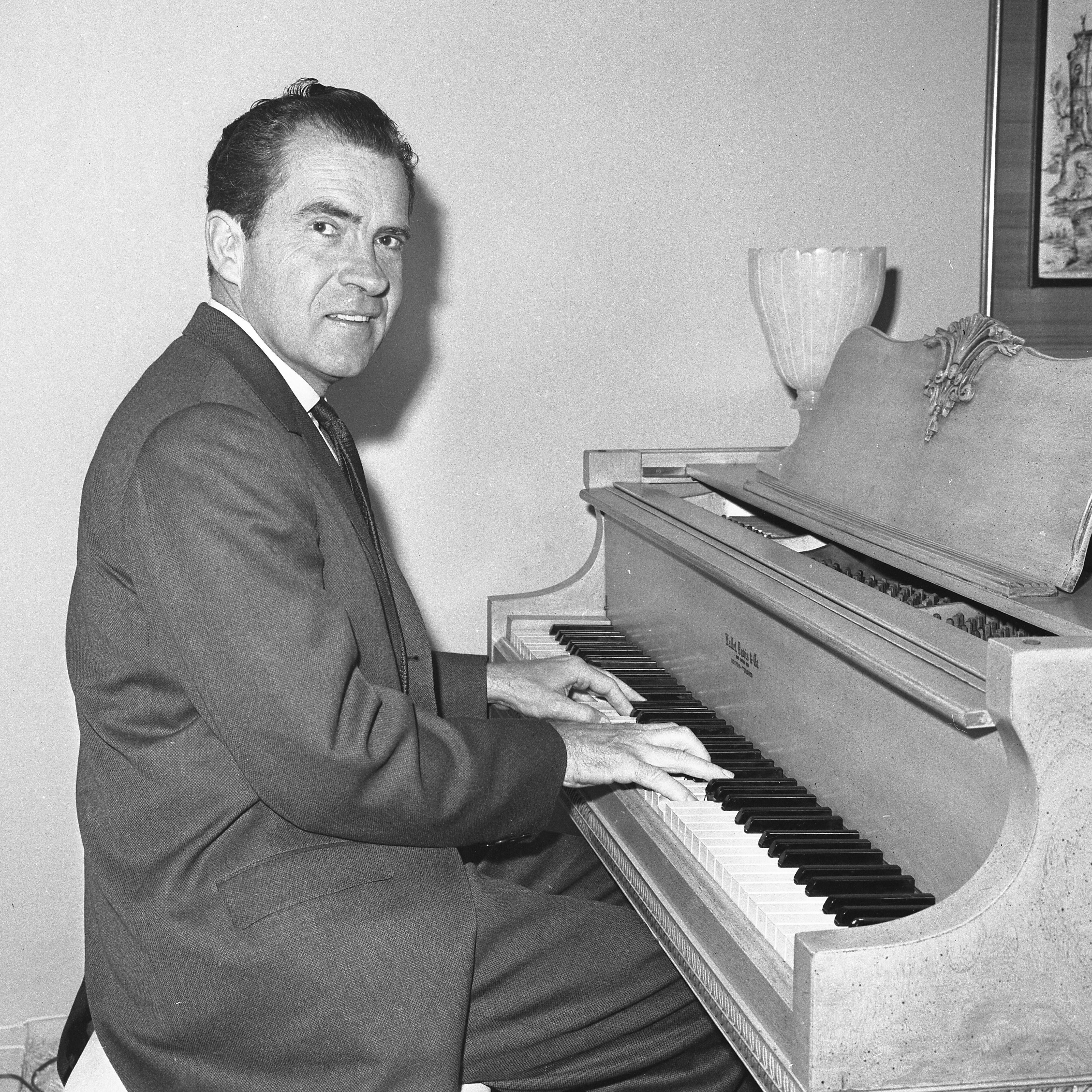 While he may or may not have been a crook, Richard Nixon was one thing for sure – a great pianist. Despite his years in the White House being clouded with debates and scandals, Nixon is also notable for his ability to not only play the piano, but write songs for it as well. On March 8, 1963, on Jack Paar’s Tonight Show, Nixon played a short piano concerto that he in fact wrote on his own. Nixon displayed a relaxed and charming attitude during his performance.

Nixon found himself back behind the piano years later, during a performance at the Grand Ole Opry in 1974. His rendition of “God Bless America” had the crowd singing along and thoroughly enjoying themselves. Little did the audience know that months later, Nixon would be resigning due to the Watergate Scandal.

January 2012 marked the beginning of President Obama’s musical career, as he sang the opening lyric from Al Green’s song “Let’s Stay Together” during a reelection campaign event held in Harlem, New York. The crowd all but loved his unexpected musical stint, and YouTube viewers from around the world seemed to be even more enamored. After this small taste of Obama’s voice, everyone wanted more. In February 2012 at a White House Blues Concert, Obama was once again giving the audience a little glimpse of what sounds to be quite a promising voice. During the concert, Mick Jagger and BB King urged Obama to sing and, with plenty of confidence, he took to singing two lines from the song native to his home state, “Sweet Home Chicago.”

Thought his musical talent has yet to fully flourish and come to light completely, some of today’s most famous musicians are looking for Obama to unleash his musical side. In fact, legendary rapper and music producer, Jay-Z, has asked Obama to sing at his “Made in America” festival.

In June 1992, Clinton took to the spotlight of the well-known television show, The Arsenio Hall Show. After climbing on stage, wearing wraparound sunglasses and a sharp black suit, with his saxophone in hand, Clinton aced his guest performance after playing Elvis Presley’s “Heartbreak Hotel.” His performance was well-received and, ironically, Arsenio complemented Clinton on his performance with “It’s nice to see a Democrat blow something besides the election.”

After this performance, President Clinton played with Clarence Clemons, E Street Band saxophonist, during an inaugural ball. His true talent was so appreciated that, during a 1994 trip throughout Eastern Europe, Czechoslovakia’s President Václav Havel presented Clinton with an Amati (a Czech saxophone); in return, Clinton played “Summertime” and “My Funny Valentine.”