Diehard fans of famous celebrities often stay the course long after their cherished idols have long since perished. Of those unforgettable iconic stars, the top ten that are the most visited  are people we can reasonably guess. People like Princess Diana and Elvis, but a few may reach out and surprise you! Long after the daisies have been pushed up a few famous graves continue to receive numerous callers daily. 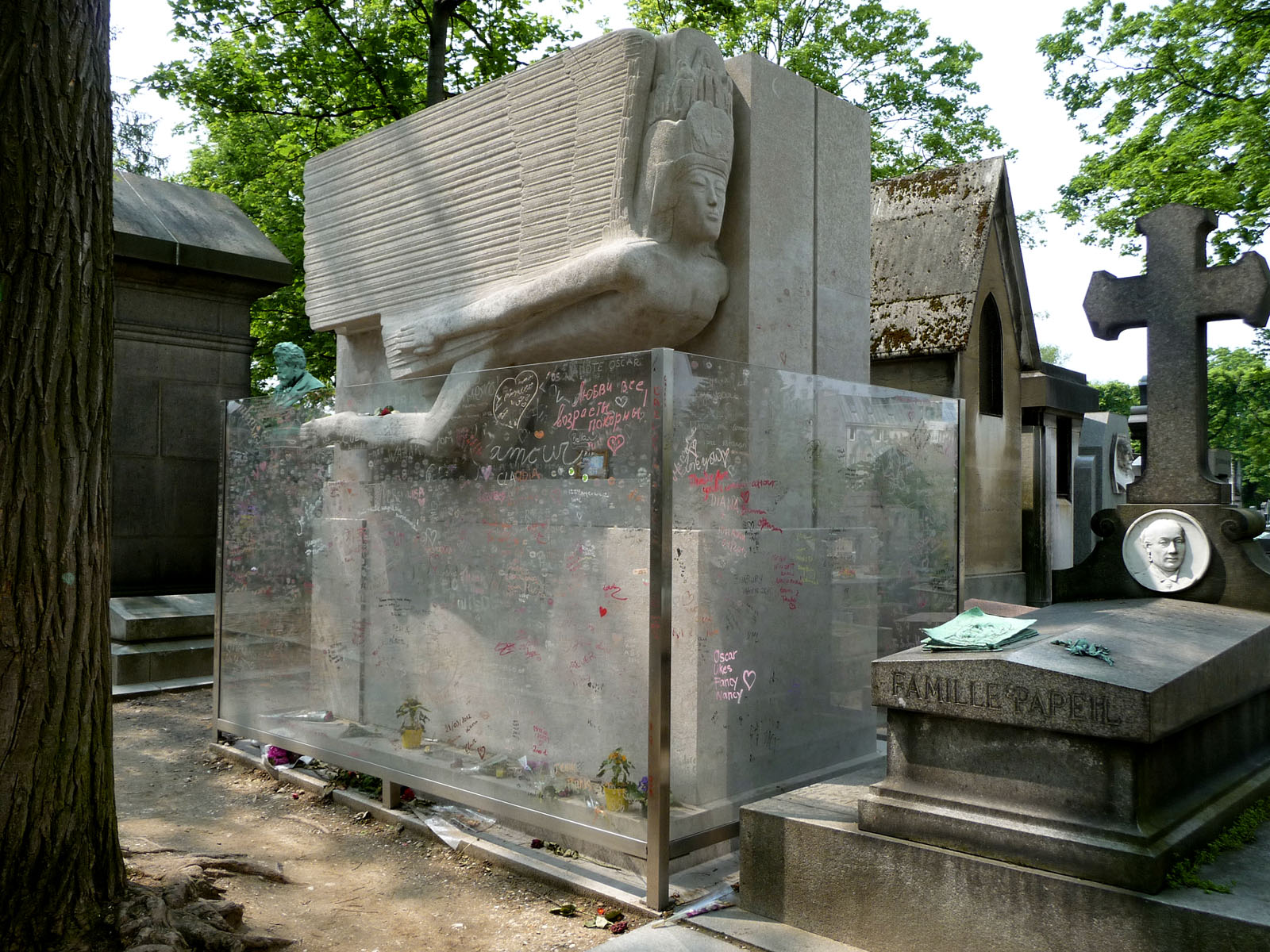 In a Paris cemetery, Oscar Wilde, (1854 to 1900) was laid to rest in the prestigious Paris cemetery, Pere Lachaise, after residing in a grave in Bagneaux Cemetery on a plot of ground only available for temporary lease. Temporary lease? Yes, and for this reason, he was encased in quicklime so the corpse would decompose faster. The famous Irish writer, poet and playwright is visited frequently by fans and his work is still being read throughout the world today, 100 years after his death. Fifty years after his passing the remains of his longtime friend, Robert Ross, was placed in his tomb. His tomb was sculpted by the famous American, Jacob Epstein. Oscar Wilde rests in peace at number 10, 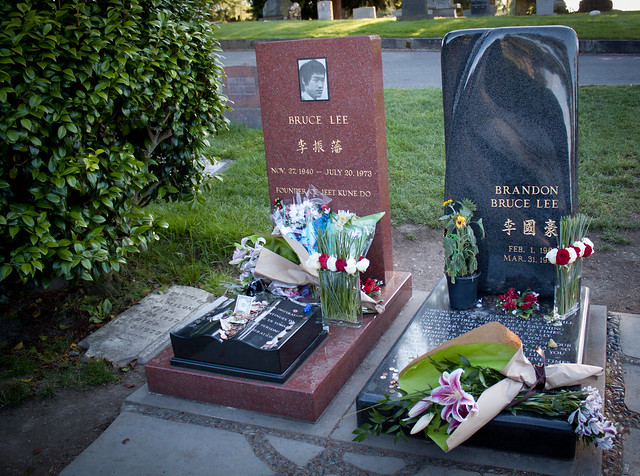 The martial-arts guru, 40 years after his death, still remains the greatest Kung Fu teacher ever and a box-office smash. Bruce Lee is still doing maneuvers in the land of the living as his fans crowd Seattle’s Lakeview Cemetery to pay their respects. The cemetery draws people from around the world including three Mongolians who trekked 3,700 miles to honor Lee on the 53rd anniversary of his birth. The trip is said to have taken the Mongolians seven months and five pairs of shoes each bringing Bruce Lee to number 9 of our top ten list.

At number 8 Samuel L. Clemens (better known by his pen name as Mark Twain), who wrote the great American novel, The Adventures of Huckleberry Finn, is now being commemorated in 2010 as it marks the 125th anniversary of the publishing of his novel. The story continues at Woodlawn Cemetery in Elmira, New York where road signs direct traffic to the final resting place that Mark Twain chose for himself and his family. The superintendent of the cemetery, Thomas Henegar, says that he estimates 2,000 to 3,000 visitors a year go to visit Mark Twain, 175 years after his birth. In 2010, what is called ‘Mark Twain Country’ citizens are filling the year with themed events and special tourism promotions in honor of Mark Twain.

Another gravesite overzealously pursued is the final resting place of Frank Sinatra. He is considered the pride of Hoboken, New Jersey in New York even though he is not buried there, and despite the fact that after he headed west he referred to the town as a “sewer”. Sinatra moved to Palm Springs, California where he died and was buried at Desert Memorial Park with a bottle of Jack Daniels and a pack of camel cigarettes. A lyric from one of his popular songs is carved into his gravestone that says, “The best is yet to come.” Sinatra ranks on our top ten charts at number 7.

Princess Diana of England was buried at the Spencer-family estate, Althorp, in North Hampshire in 1997. Now she appears to be the Lady of the Lake as her remains reside on Round Oval island, a small island (populated with four black swans) on the family property. It isn’t the place where King Arthur received Excalibur but from this lake’s edge, onlookers can see an urn with no headstone and another type of legend. Once a year, between July and early September, visitors are granted the opportunity to visit Princess Diana’s grave although no one is allowed to set foot on the island, the path to the island’s entry is lined with 36 birch trees, one for every year of her life. Now she takes 6th place on our list for the most visited grave sites. 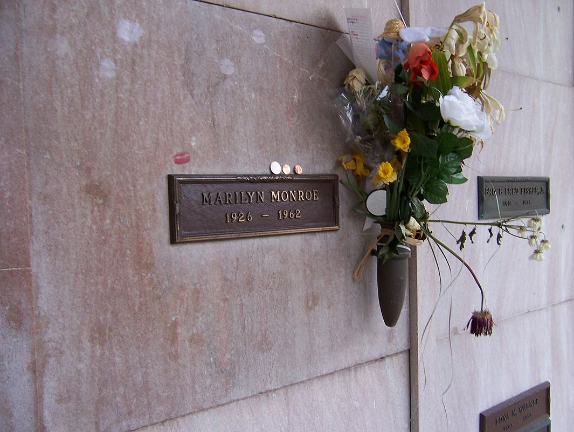 In America, a hugely popular celebrity death was the death of Marilyn Monroe in 1962. She was the iconic female sex-symbol of the ’60s and has lasted as an iconic sex-symbol still to this day. Today the crypt directly above hers in the Los Angeles Cemetery has been on eBay for auction (although not yet sold) and has reached a top offer of $4.6 million 47 years after her death. It is said that Hugh Hefner is rumored to have reserved his place beside her. The crypt is located in the Corridor of Memories in the Westwood Memorial Park where other celebrities remains can be found like Dean Martin, Truman Capote and Dona Reed. It is said that of her various husbands, ex-husband Joe DiMaggio (who she was only married to for 274 days) never remarried and sent red roses to her crypt three times a week for the next 20 years. Marilyn, you win our affections at number 5.

Of all the most popularized graves to visit, the grave site of Jim Morrison, who died in Paris on July 3rd, 1971, is a tribute to his influential life as a talented musical, rock legend. He rocks in at number 4. His final resting place is at Pere-Lachaise Cemetery in Paris, a cemetery that was established in 1804 by Napoleon Bonaparte. Although other famous musicians and writers also are buried there, like Edith Piaf, Max Ernst and Oscar Wilde, Jim, the American rock star’s grave takes the place as the most visited plot on the cemetery grounds. Hoarded by tourists daily, cemetery staff have often had to deal with unauthorized tributes from fans from a bust of Morrison to arrows pointing ‘Toward Jim’.

Elvis Presley, the rock-‘n’-roll legend died of a prescription drug overdose in August 1977 and was first buried in a mausoleum in Forest Hills Cemetery in Memphis, Tennessee and was later moved to Graceland because of a thwarted attempt by vandals to steal his body. Admission to Elvis’ grave is part of the Graceland tour and although dead for more than three decades, 600,000 people a year still visit him contributing nearly $150 million to the Memphis economy. For all those fans Elvis lives forever at number 3.

Certainly the most prized grave site of all time is inhabited by the remains of Shakespeare, the most famous English language writer in history. His work has been studied and translated into more languages than any other printed work except the Bible. Shakespeare lived from 1564 to 1616 and still to this day, thousands of people frequent his tomb in Stratford-upon-Avon in Warwickshire, England at the Holy Trinity Churchyard. His grave is covered by a flat stone that bears an epitaph believed to be written by him reading,

Good friend, for Jesus’ sake forebear
To dig the dust enclosed here;
Blessed be the man that spares these stones
And curst be he that moves my bones

Shakespeare was buried in the Holy Trinity Church not for his life’s work but actually paid for the privilege at a high price at 440 pounds along with his family members after saving his money as a playwright. His influence on the world and for a grave site that has been visited for all these years brings Shakespeare in at number 2 of our top ten list.

Coined ‘The King of Pop’, Michael Jackson is reserved on this list for number one simply because of the potential he has to become one of the next most visited celebrity graves. Partly because up until now nobody has been allowed to visit Michael Jackson’s gravesite at The Forest Lawn (known as the ‘Country Club for the Dead’) in the Hollywood Hills, California. The place where he was buried quietly in the Great Mausoleum. Michael Jackson’s brother, after reaching an agreement with the owners of the cemetery, have decided they will open to the public at the first anniversary after his death on June 25th and will remain open. Michael’s brother says fans will be able to go right up to the mausoleum and drop off flowers and visit. Michael loved his fans and his fans loved him. Time will tell if he soon tops the list, but with the ‘thriller’ of the unknown, Michael one day may be entertaining his fans once again.

Instead of inhabiting red carpet events, these stars now reside in famous cemeteries where resting in peace isn’t quite all that death once promised to be. For these long gone celebrities fans continue to visit them years after the fanfare is gone and their mortal remains have all but turned to dust. Of the top ten most famous graves visited, these are the ones who’ve been laid to rest, but that continue to haunt us all.