Regardless of your opinion of the Bard, the man (or men) had the uncanny ability to take a phrase that was so perfect it couldn’t help but to catch on. Many phrases that we take for granted are an unintentional homage to Shakespeare every time we use them.

Also, given the suspected authorship of some Shakespeare’s works and the not so reliable record keeping, there are some phrases here that some may disagree upon as being first penned or used by Shakespeare. I politely ask you to shut up or write your own version of this list, rather than fill the comment section with unhelpful dialog.

Is it possible that love should of a sudden take such hold? – The Taming of the Shrew

A more poetic way to say “suddenly,” this phrase was coined around 1596, first used in Shakespeare’s play The Taming of the Shrew, i.e. how to get Elizabeth Taylor to go from dom to sub.  For us 90s kids, it’s the movie where Heath Ledger is singing karaoke style in some bleachers to win back Julia Stiles. This line, spoken by one of the main character’s men, illustrates his wonderment that after observing a young woman for only a few moments, his master is beset to marry her. Fun fact: to say “all of the sudden” is common among layman users, while using “all of a sudden” is deemed more grammatically correct. A sudden at the time was simply a term for any unexpected event, so something could happen at the sudden, or in the sudden, or even on the sudden. As such, all of a sudden is just a phrase to encompass an unexpected event, such as a love at first sight (or any Disney

This said, his guilty hand pluck’d up the latch,
And with his knee the door he opens wide.
The dove sleeps fast that this night-owl will catch:
Thus treason works ere traitors be espied. – The Rape of Lucrece

The term “nightowl” was just a fancy and somewhat redundant way to say owl until Shakespeare took it a step further with his imagery in these lines from his poem, The Rape of Lucrece. The poem comes from Roman history, wherein a man name Tarquinius, a prince of Rome, lusts for and rapes Lucretia, the wife of Collonius, a member of the Roman aristocracy. In her shame, she commits suicide and becomes a rallying point for a revolt against the royal family. All this brief history legend is the groundwork for me to say that Shakespeare was the first to use nightowl as a description for a person, and not a repetitive one for a bird. It has nothing to do with insomniacs or people who can’t turn off their devices – it’s to describe a rapist. Can’t wait to use that one. 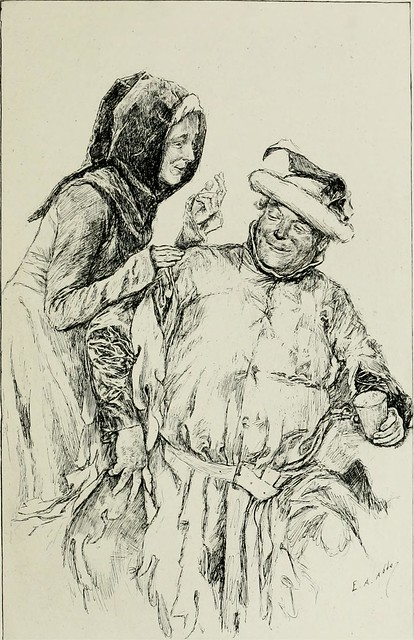 I cannot tell what the dickens his name is my husband had him of. – Merry Wives of Windsor

Finding the meaning of this phrase put to rest many a restless thought about the phrase “like the dickens.” Having read some of Charles Dickens’ works, it seemed like a stretch for his name to be attached to the phrase, but what else could it be? After all, many of his characters suffered hard-knock lives, so maybe when someone used his name, they meant it in a way that they felt like they were in a Dickens’ novel. Told you it was a stretch. As far as I knew, there were no other dickenses to be had in this world, or any other! Imagine my relief when I found out that the phrase had nothing to do with good ol’ Chuck. Shakespeare first used the phrase in his comedy The Merry Wives of Windsor, published in 1602. Rather than meaning a person, when you compare something to the dickens, you actually are referring to Devil! The dickens was a soft-core version of the Devil’s name, much like we say “shoot,” “geez,” or wizards use “He-Who-Must-Not-Be-Named.”

7. Off with his head 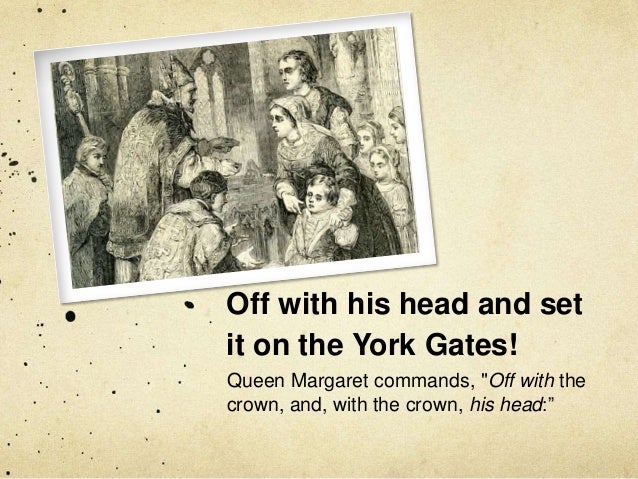 Off with his head, and set it on York gates;

So York may overlook the town of York. – Henry VI Part III

Were you surprised to see this on the list? I certainly was. I would have sworn up and down that Lewis Carroll penned this endearing phrase for his psychotic Queen of Hearts so she would have something that gave her a niche in his absurdist acid trip. Once again, my assumptions betray me, and I’ve had another revelation. During Shakespeare’s historical play Henry VI Part III, Queen Margaret, the Queen of England, mocks Richard Plantagenet, Duke of York, who wants to take the crown from her and her husband, on the battlefield. Well, first she kills his 12 year-old son, and then she mocks him, and by mocks, I mean she makes York use a hanky dirty with his dead son’s blood and wear a paper crown (presumably from a Burger King kids meal) before taking turns with her company stabbing him to death.

6. There’s method to my madness

Though this be madness yet there is method in it. – Hamlet

Okay, so it’s not a word-for-word quote like most of these are, but I know that I say this one frequently. Make a wrong turn? Pour my milk before my cereal? Most of my mess-ups are followed by something involving method and madness and deal with it. Granted, the original context of this is from Hamlet, during which Mel Gibson’s acting is at its best and most authentic: being a crazy person. Hamlet is wandering around the castle, spouting what sounds like nonsense, but if listened to carefully, is actually speaking in double entendres. The character being quoted is remarking on how Hamlet seems to be out of his mind, but it still making perfect sense. You’d think that this one was pretty straightforward in its meaning. Have you ever tried chasing a wild goose? Or worse, had one chase you? That was one of the most frightening moments of my young life. Once you chase a goose and it chases back, you learn things about yourself.  However, if you put yourself back in Shakespeare’s day, a wild goose chase was actually comprised of horses. Yup, horses, four-footed, hooved, galloping animals that lacked the ability to fly. Don’t worry, for those of you lost like I was, it’s about to make much more sense. When Shakespeare used it, he was actually using it to refer horse racing, wherein one horse would take the lead, and the horses behind would follow in a formation that mimicked that of a wild goose formation. In Romeo and Juliet, Mercutio, the temporary comic relief of the play, and Romeo are making jokes. He uses the phrase to declare Romeo the winner of their battle of wits, saying that Romeo’s jokes are worth five times on of Mercutio’s. Although the phrase no longer carries this meaning, it is because of Shakespeare that it has endured.

4. Too much of a good thing 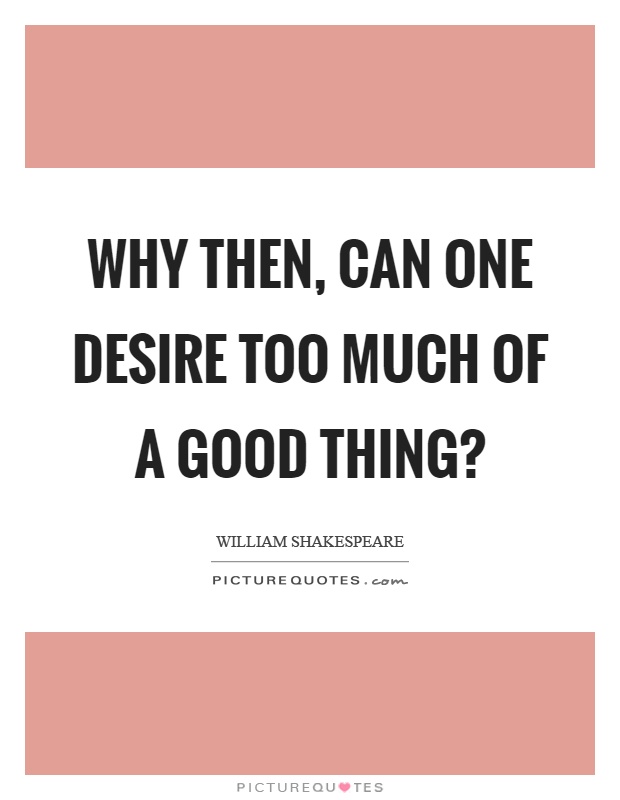 Why then, can one desire too much of a good thing? – As You Like It

While Shakespeare didn’t first coin this phrase, he most likely put it on paper first. During the play As You Like It, one main character by the name of Rosalind is in love with another, Orlando, and he with her. However, Rosalind in is disguise as a young man named “Ganymede.” Orlando and Rosalind, I mean Ganymede, hit it off well and become bosom buddies (big surprise).  At one point during the play, Orlando is overcome with angst about proposing to and marrying Rosalind, because she’s so cute, she’s so wise, she’s so etc., the list goes on. Ganymede offers to pretend to be Rosalind so that Orlando can practice his marriage vows, and during this practice, Orlando again laments about how can he know Rosalind will say yes. Ganymede, getting more than a little testy, assures him that Rosalind would take twenty men like him if she could find them. He’s such a good man, why only limit yourself to one?

The Windsor bell hath struck twelve; the minute draws on. Now, the hot-bloodied-Gods assist me! – Merry Wives of Windsor

Shakespeare was a fan of putting words together in new ways, and he created many of the tiny two-bit phrases we know and abuse today. After all, that’s what this list is about, but did you know that a phrase a simple as “hot-blooded” has been in the vernacular for centuries because of him? I bet that makes you feel a little better about yourself knowing that every time you’re singing Foreigner, you can call yourself cultured for quoting the Bard. Or you can at least keep telling yourself that. 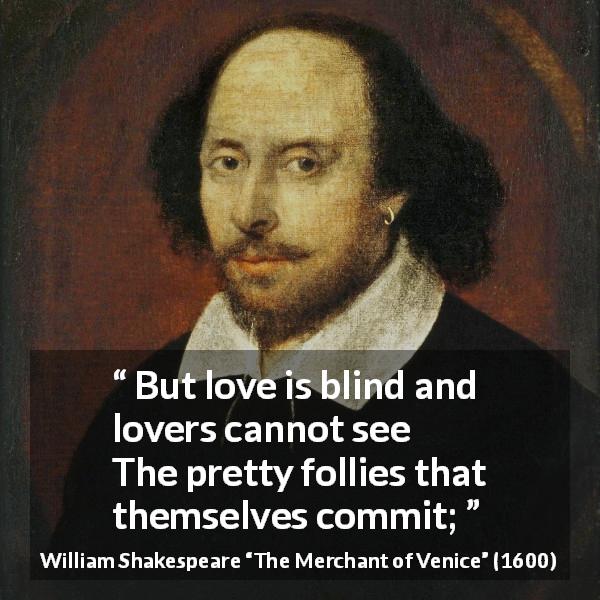 The pretty follies that themselves commit – Merchant of Venice

Because Love is blind – Two Gentlemen of Verona

Yet they do wink and yield, as love is blind and enforces – Henry V

If words were children, then like all parents, Shakespeare had his favorite: Love is blind. It appears in multiple plays, as you can see above, and every time it’s mentioned, it’s never a good thing. The idea of love blinding one to another’s faults is something that has been the topic of discussion for many a post-break-up rag session. When a loved one breaks our hearts, provided that we aren’t actually a Shakespearian character, all of a sudden, they become an incredibly flawed individual. We remember things that didn’t bother us before as major annoyances. It makes sense though, that we wouldn’t want to see the flaws in our partner. Scientifically, feelings of love have shown that we stop being so critical in our attention towards our partners because they are no longer unfamiliar, and so it is easier to gloss over any imperfections for the sake of the stability of the relationship. Going from the honeymoon phase, to this, to senility, and we don’t have a chance to come to our senses!

Knock, knock! Who’s there, i’ the name of Beelzebub?

Here’s a farmer, that hanged himself on the expectation of plenty:

come in time; have napkins enow about you;

Ah, the knock knock joke. Possibly the most surprising thing I found for this list. During Macbeth, a porter (or doorman) starts telling jokes about various people knocking on the door to Hell, right after Macbeth and his wife have committed murder. There are 21 lines of this going on, and you know that the whole time, Macbeth and Lady Macbeth are feeling more and more awkward as they wait for the joke that just won’t end. And what a tradition of awkwardness it is, because no joke is more annoying than a knock knock joke that won’t end (or ends in banana). Thank you, Shakespeare.