It seems when celebrities aren’t doing their thing in the limelight, they’re busy doing something else that will lead to them returning to said limelight as swiftly as possible.  Whether that’s talking extensively about tiger blood or working on their next project depends on the celeb in question and their mental wellbeing, but surely there is more to life?  Everyone needs a hobby…

And hobbies they have!  In their precious downtime, there are more than a few celebs who like to do a little collecting.  While there are some fairly regular behaviours out there, as you’d expect the a-list can’t be satisfied by being just like everyone else, oh no.  Here are the Top 10 Most Unusual Celebrity Collections. “Do you think I’m sexy?” Not really, now I know you have a penchant for model railways.  Obviously collecting toy trains

isn’t that crazy.  Nevertheless, being Rod Stewart and collecting model trains does strike one as bizarre.  Surely he should be entertaining super models and forcefully projecting raspy odes of affection about a girl named Maggie May?

The thing is, Rod isn’t alone when it comes to rock stars with less than rocking pastimes.  Apparently Ronnie Wood collects stamps (what a cliché) and, although not a collection, Alice Cooper has long loved nothing more than a round of golf, a fact he kept hidden during the heights of his snake-based antics. 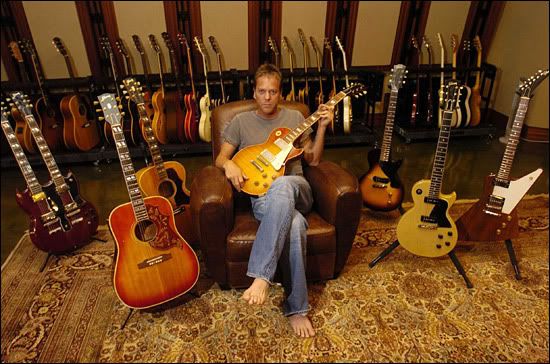 The 24 star is an avid collector of Gibson guitars.  At last count, his collection was around the 38 mark, which by anyone’s standard is fairly excessive.  They’re all housed at the studio he set up to help and encourage young people to get into music and start playing.  Good work Kiefer!  His love for guitar was fuelled by hearing the likes of Jimmy Page and Angus Young when he was a mere sprog, before The Lost Boys even, and since then he’s never looked back.

Kiefer loves to play, but classes himself as a music appreciator rather than a musician.  This didn’t stop the famous guitar manufacturer from creating a signature Gibson in his honor.  Seriously.  Kiefer is up there with Robby Krieger and Slash.  If you fancy plucking his strings, then the model is called the Gibson Kiefer Sutherland KS-336.

As you’d expect, Tarantino’s love of pop culture is present in his collecting habits.  Only marginally less into board games than women’s feet (you can’t collect those), it clearly seemed like an obvious choice.  In an interview, he showed off his collection that he keeps organised by genre.  His favourites are Dawn of the Dead and Universe.  The latter he claims is “the closest they ever came to an official 2001: A Space Odyssey game.”

He also has a Platoon game that, at the time of the interview, he was hoping to one day play with Oliver Stone.  I have no idea if that ever happened, but the image of it is now set in my mind’s eye.  Interestingly, Tarantino also set out to collect retro lunch boxes, but gave up as they were too expensive. Reese is a southern belle through and through, born and raised in New Orleans, Louisiana.  Arguably, her hobby of collecting antique linen is somewhat in-keeping with this background.  She supplements this love with an additional fascination of intricate embroidery.  She sounds like the perfect girly girl. 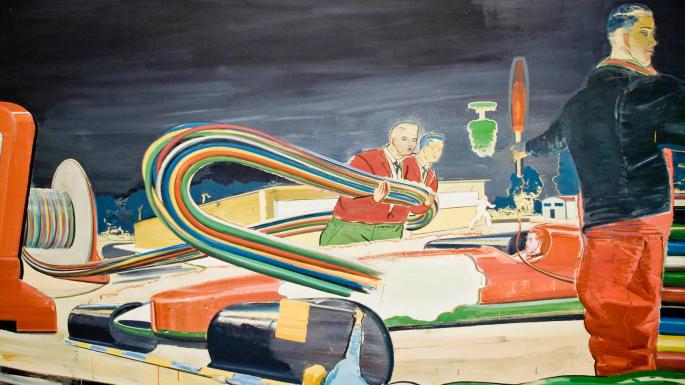 Etappe, one of several works by Neo Rauch, the German artist, owned by Brad Pitt

Everyone’s an art critic, even Brad Pitt.  His particular specialty seems to be metal art, in particular functional metal art pieces.  I’m not sure if this is what the rest of the world would refer to as garden furniture, but either way Brad loves it.  In fact he’s big on art in general, once turning up at a gallery in Basel, Switzerland to shell out the best part of $1 million on a rainbow-colored racetrack painting entitled Etappe by Neo Rauch. 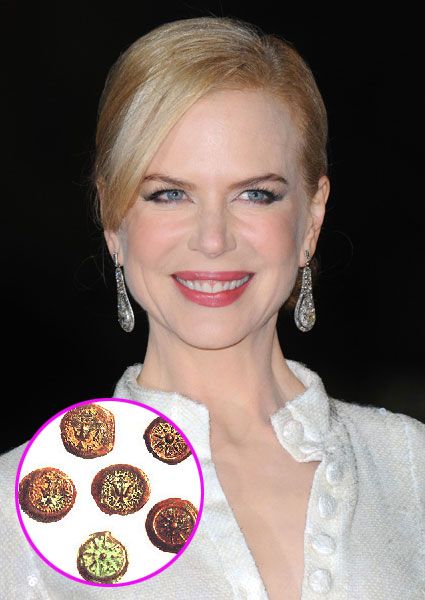 When not acting or playing Nintendo (another of her favorite pastimes), superstar and all-around Oscar darling Nicole Kidman likes to do a little collecting in the way of ancient Judean coins.  There is a not-inconsequential amount of Judean coins out there to collect so presumably this keeps Nicole occupied manfully while she attempts to revisit and replicate the artistic and creative highs of her debut work as Judy in BMX Bandits. 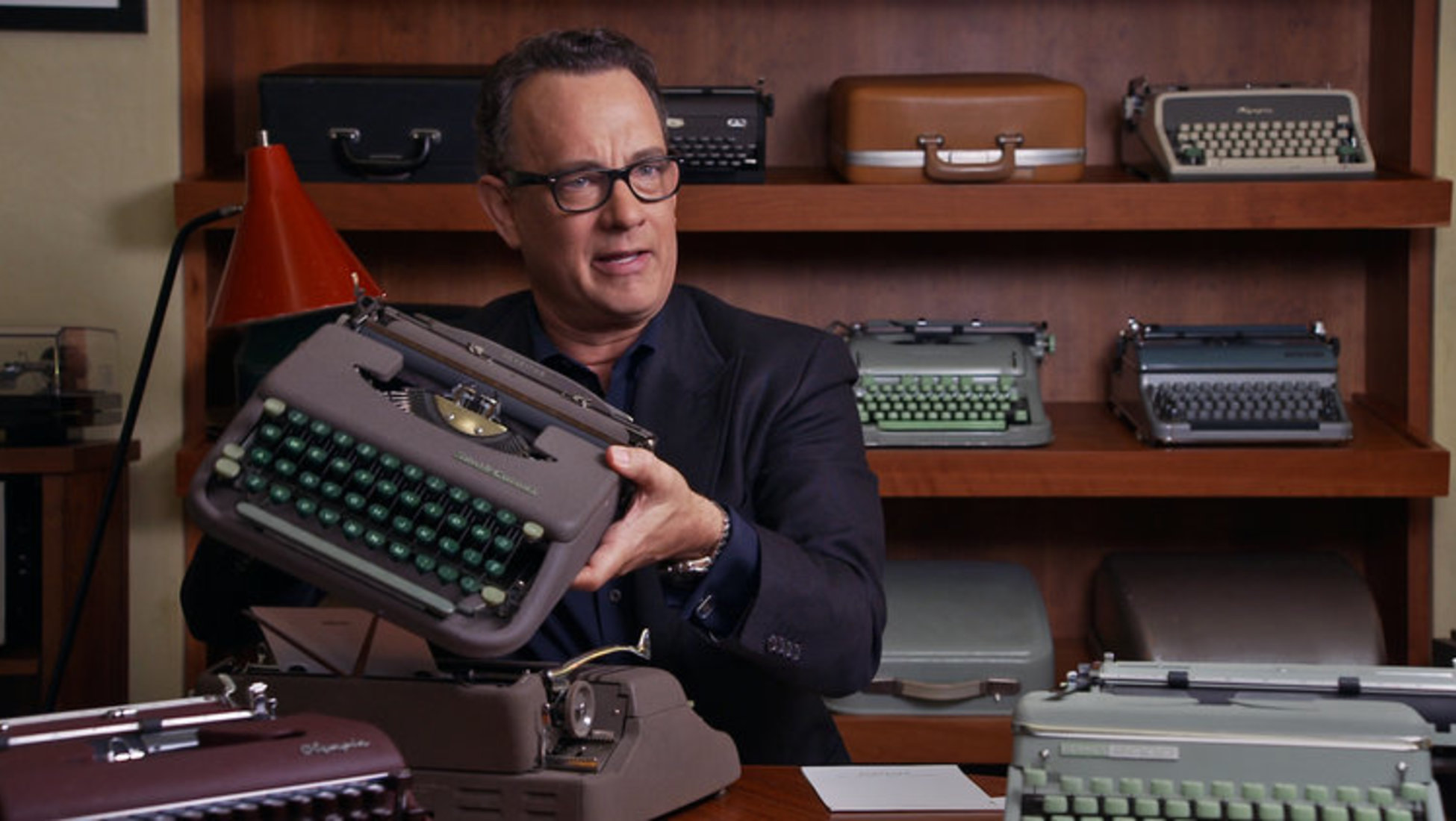 Hanks managed to get a bargain from the man and bought a Hermes 2000: the cornerstone of a collection that nowadays comprises of more than 100 typewriters.

So Tom, what you got there?  About 200 portable manual typewriters?  Oh…yup, Tom Hanks likes little more than a mechanical key stroke.  The worldwide promotional tour for the film Larry Crowne meant leaving the collection at home, something he was clearly struggling with.  Tom did the sensible thing and took his trusty Corona model with him.  It is portable after all.

Tom didn’t stop there though; throughout the tour he posted pictures showing what a swell time he and the Corona were having.  For the most part, pieces of his collection are fully functional, due to Tom’s dedication to keeping them all in tip-top shape.  His love stems from the permanent nature of anything that is produced on a manual typewriter, believing a note written in this manner is like etching the sentiment in stone…not quite right Tom, but we get the idea.

Avoiding any obvious jokes about the things Angelina likes to collect, we’ll get straight to the point, literally.  Miss Jolie has a fine collection of knives.  It doesn’t really come as a surprise, does it?  Especially after that whole vial of Billy Bob’s blood episode.  Her mother bought Angie her first knife when she was about 12 years old and the collection started from then.

If you doubt the interest Angelina has in the pointy and metallic, have a peep at her butterfly knife skills as demonstrated on prime time American TV…honestly, it’s on YouTube.  Slightly more disturbing is the fact she has already started her son Maddox down the same route.  And even more disturbing: in a magazine interview, she claimed to have cut herself during sex as a teenager to heighten the pleasure of the experience.  On second thought, collecting knives is probably one of the less unusual things Jolie spends her free time doing.

Building an expansive collection of creepy crawlies isn’t the first hobby you’d associate with a global supermodel, is it?  Well, you’ve clearly not met Claudia Schiffer.  The German model turned designer can’t get enough of bugs.  Her home is adorned with images of insects, one of which is actually crafted from insect parts and hangs pride of place in the living room.  Even her 2011 knitwear range was inspired by spiders, and she claims arachnids are her favourite muse when it comes to a bit of doodling. Depp is a heroic collector.  The unusual item that started the adventure down JD’s rabbit hole of hoarding was a pigeon skeleton.  This is at the extreme end of the bats and bugs he’s so fond of.  He even has a favorite bug shop that is located in Paris, France.  Wonder if he’s ever chatted to Claudia about wee beasties with more than four legs?  Arguably more conventional is his collection of items owned by beat writer Jack Kerouac.  These include not only interesting editions and manuscripts of Kerouac’s work, but jackets, a raincoat and a suitcase that belonged to the author too.

There is also his range of art and craft lamps that complement his collection of art deco furnishings.  And Johnny also has a not-insignificant collection of pictures featuring clowns.  One of which was supposedly painted by the murderer John Wayne Gacy.  It’s creepy, but also somehow very Depp, which makes his unusual collecting just that much cooler than everyone else’s…

This article is written by Samuel Chimes, by day a copywriter for online retailer Find Me A Gift.