OK, that’s enough; the jokes are over.  For too long, my brethren and I have sat idly by, while you and your stupid little buddies mock us.  “Gingers. BAH,” you spit with disgust.  “They have no souls.  They can’t walk in the daytime.  They’ll steal people’s children in the night.  They’re like pale Pokemon: gotta kick ‘em all!”

For awhile, we put up with it.  Jokes, right?  Nothing wrong with that.  Hell, joking is one of the ways I make my money.  But, after years of this, it’s time to come right out and let you all know: you have kicked a giant hornet’s nest.  Us gingers?  We’re actually your worst nightmare.  Not in the steal-your-babies kind of way, either.  No, we’re just plotting to take over the entire planet, like Pinky and The Brain wanted to but never could. 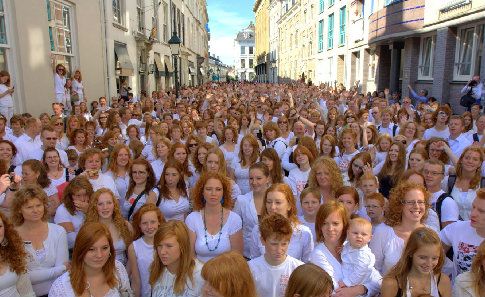 Are you aware that an entire festival exists, devoted entirely to us?  It’s called Redheadday, and it’s just what it sounds like.  Thousands upon thousands of gingers flock to one area in the Netherlands and plot your demise.  Also, we eat a lot of meat and drink a lot of booze

because, while we may be coming together to end you all, it’s still a funtime festival where you gotta get fat and blitzed. Also, it happens every year.  And the numbers grows and grows each time.  Redheadday 2012 is scheduled to take place in September, with several thousand projected attendees.

The Mayan calendar says the world will end in December.  The obvious conclusion; we’re giving you all a slight head start before we unleash Hell.

Learn More About The Gathering Grounds It’s no secret that ginger women are regularly ogled, despite supposedly being evil soulless rangas.  The stereotype is a nice one: our women are absolute firecrackers in bed and once you go red, all other girls might as well be dead.  Case in point?  Google some pictures of Tori Amos from the early-to-mid 90’s and tell me that is not your fantasy incarnate.  Hell, even now she’s better than whoever’s currently #1 on your lame Hot Babes list.

Another case in point?  Lindsay Lohan was once a redhead, and was universally deemed to be absolutely smoking hot.  She goes blonde, and magically turns into a crack-addled psychopath who looks about 30 years older than she really is.  She is not yet actually 30, by the way. So the sexy redhead thing is true, you ask?  Well, yes.  Please don’t resist.  The more that you guys realize this, the more our girls can seep into your bedrooms and latch onto your men like blood-sucking parasites.

8.  We Will Also Steal Your Women

Us ginger guys usually get the crap end of the stick here.  While ginger girls are hot, gingers guys are Alfred E. Newman from MAD Magazine: pale, freckly-faced little demons that often look like they weren’t fully cooked prior to being born.

Well, that’s about to change.  Dedicated soldiers like Conan O’Brien, Seth Green, and that Anakin Skywalker-looking hunk up above (who may or may not be me), have been infiltrating the mind of your women for decades now, and the ladies are finally realizing that, yes, redheaded guys are a fetish worth exploring.  We’re quirky, we’re funny, and we are every bit as firecracker-y (for lack of a better, actual, word) in the bedroom as our female brethren. The word is out and it can’t be silenced.  Blondes have more fun?  Sure, WITH THEMSELVES.

Our backs are kind of against the wall in a couple respects.  For one thing, we’re endangered.  A mere 2% of the population are redheads, and the number may well be dwindling.  We must procreate, we must spread the seed, we must live on!  And if that means enslaving all of you, and working extra hard to make more of us, then so be it.

Keep in mind, it’s not like a Gattaca-style machine exists, where we can tell our body what we want our baby to look like.  And we’re fully aware our gene is recessive, so not every offspring is going to be a blessed redhead.  No, we’ll just have to try and try again, until we at least make it up to 5%.  After that, we’ll take an inventory and see how much enslaving still needs to be done. 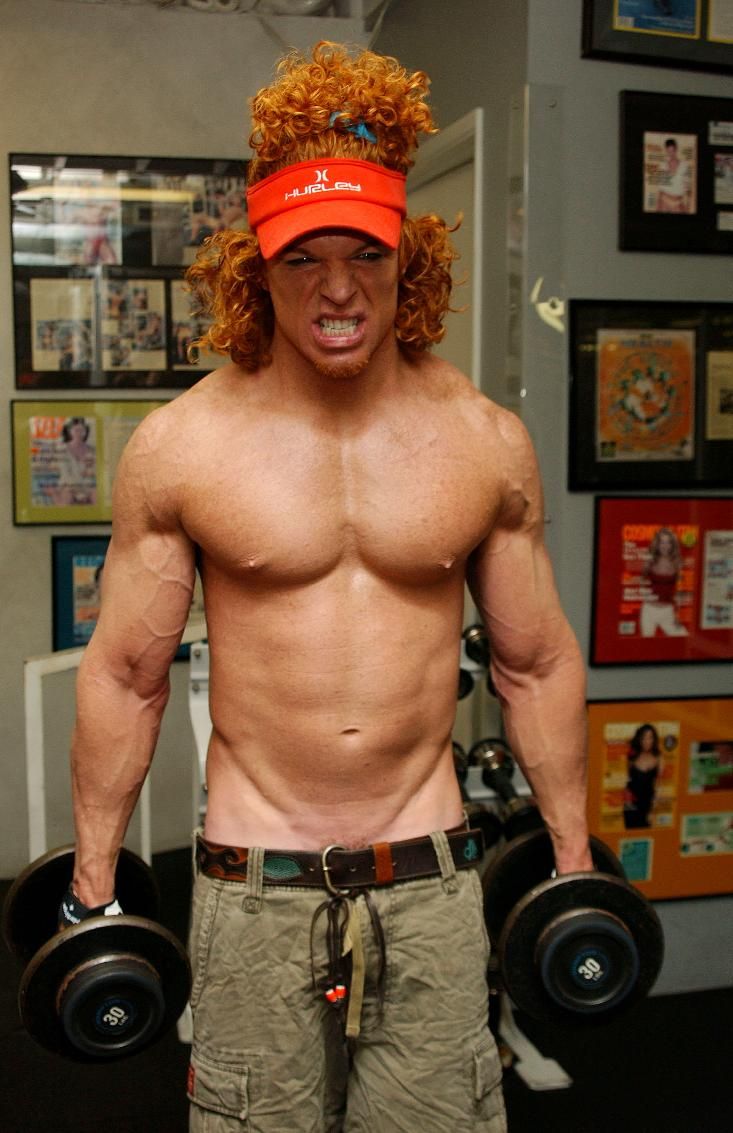 We may or may not require extensive medication to pull this off.

5.  The Temper Thing Is Real

Here’s yet one more reason to not mess with us: everything you’ve heard about the redhead temper?  It’s true.  It’s DAMN true.  We don’t take a lot of crap lying down and, if we’re going to invade your towns and take over, we’re going to do it with the ferocity of 100,000 rabid wolverines, crossed with another 100,000 honey badgers. It’s not always the best trait to have, to be sure.  If we don’t keep our temper in check while living our everyday lives, then we’re probably going to screw ourselves out of at least one job opportunity, and more than a few relationships.

Luckily, the GingerVasion isn’t about building relationships or keeping a job.  So consider this your warning: go down to your nearest comic book store, find an issue of Red Hulk, study it, and weep for your future.

4.  We Can Fight FOREVER

So you want to rumble?  Tired of us enslaving your people and taking your lovers for our own?  Good luck.  Even those of us who haven’t used extensive medication to get big ol’ muscly arms are going to put up a fight.  And even if you get lucky and hit us, it’s gonna be real hard to keep us down.  Extensive scientific research has shown redheads are actually much harder to knock out than people who can actually tan.  This applies in all cases: doctors oftentimes use more anesthetic to knock us out prior to surgery, and we rarely get knocked unconscious.

I can attest to this based on personal experience.  During my entire time at college, where I had my share of drinking binges (one time I ate a whole damn bowl of Jell-O shots, unaware that you’re only supposed to eat two or three cubes at the most), and never once blacked out.  When I was six years old, I went in for surgery, and distinctly remember waking up in the middle of the operation.  Oh, they put me back down real fast.  But I distinctly remember those few seconds of being on the operating table, aware of what they were doing to me and my supple little body, and being less-than-thrilled about it. So let that all sink, and then let me know if you STILL wanna fight.

Why Even Doctors Fear Us

3.  Everyone Wants To Be Us

As I mentioned earlier, 2% of us are natural redheads.  But at least 2% of you guys and girls are fake redheads.  Hair dye, of all colors, is popular, but there just seems to be something about taking a bucket of red paint and dunking your head in it that positively tickles the imagination of so many.

And, while you might think we’d be offended by so many people pretending to be us when they’re really not, it’s OK.  If you want to be a redhead, then that’s only one step away from SLEEPING with one.  Gotta find out how the other half lives.  Not that we’re even close to half of you or anything.  Yet.

This hair-dye thing applies to both men and women by the way.  You mainly see fake redheaded women, but dudes get into the act as well.  And that’s OK too.  The more people who get corrupted by their desire to be just like a real-live ginger, then the easier it becomes for us to attain our ultimate goal.

Back in 2005, South Park put out an entire episode dedicated to Cartman’s hatred of redheads.  Some of you people have taken this episode just a wee bit too seriously, taking on Cartman’s ramblings as your own.  Yes, we do have souls.  They might be filthy and polluted (OK fine, definitely are), but they’re still souls.

And why in the name of Hell would you listen to Cartman, of all people?  The whole point of the character is that he’s a bigoted little turd who deserves every bad thing that comes his way; hardly a role model for your outlook on life. So yes, we’re all aware that you listened to a cartoon piece of construction paper and decided that he was right about people who have strawberry tint on their heads.  You don’t think this ridiculous bias irks us?  You don’t think it pisses us off when the biggest sperm bank on the planet stops accepting seed from redheads because nobody wants a redheaded baby?  You don’t think we’ll remember all this when we’re deciding all your fates?

And, for the record, when I say “all of your fates”, I mean you dummies who watch the show, and want to kick gingers because of it.  I mean the people who turn their noses up at the very idea of a ginger child.  The guys who write South Park and tell the jokes, they get it.  They know Cartman is satire.  They will be spared, unless of course they insist on making a sequel to BASEketball.  Then all bets are off.

South Park Is The Way, The Truth, And The Life Sperm Bank Hates Customers

1.  We Will Steal All Your Sunscreen

This might initially seem like a random, moot point.  Between all the threats of takeover, slavery, and fistfights to the death, I‘m actually going to brag about SUNSCREEN?  Yes, yes I am.  Because in case you haven’t heard, the Earth is getting warmer.  Icecaps are melting, and the ozone layer is still thinning out.  Go to your local Wal-Mart and find the sunscreen?  See those bottles of SPF 110?  One hundred ten!  Who needs that much protection?  Well, all of you, at the rate this planet’s going.

Not that we care. See, we’re used to this. We’re naturally pale, and the sun is our mortal foe. So from birth on, we’re used to being slathered in SPF 60/70/100/110, and oftentimes that’s STILL not enough.  So when the SP 150 and SPF 200 start becoming commonplace, while you sun worshipers scoff at the idea of anyone needing such a strong solar shield, we will silently horde it all for ourselves.

And when the Earth inches ever-so-closer to burning up, like a steak left far too long on the grill, you might well show up at the gates of Redheadday, on your knees, begging us for a slather of sweet, sweet, sun protection. And we just might give it to you.  For a price.

Jason Iannone is a writer, editor, and would love to branch out into the Seth Green Impersonator business as well. L