Japan has become one of the most shocking nations on the planet. Or more precise one of the nations that likes to shock people the most. There is no such phrase as “gone too far” for the Japanese. The image of that country has been tarnished forever ever since Google was first turned on, when it became less about ninjas and Godzilla and more about bizarre game shows and traumatizing sex fetishes.

The only thing left really is concentrating on the more adorable kind of Japanese zaniness that relates to their odd food choices. With this, here are the 10 Weirdest Japanese Snacks and Drinks.

When you are living on an island, it’s natural that most of your daily diet will come from the sea, and the Japanese have proven over the years that if it swims, they will eat it without exception. This is the nation that willingly eats Fugu for Pete’s sake, a fish so poisonous that unless you prepare it correctly you will die very painfully. Compared to that, candied squid seems almost sane… the key word being “almost”.

You can get these at any convenience store or on a stick during a traditional Japanese festival. Funny thing though, the candied squid isn’t actually sweet (don’t ask how that works) and often comes in such appetizing flavors as “Cod Roe” or “Spicy Korean Cabbage.”

The product of the NEEDS cheese factory in Hokkaido, the Cheese Drink has allegedly been produced to raise cheese awareness in Japan. It is estimated that over 20 million Japanese kids don’t know what real cheese looks like* and more than 30% of all Japanese adults think you can get cancer from touching cheese ** so what the NEEDS company is doing is actually very noble indeed***, slowly easing the society to the idea that cheese is not evil. Because it’s not like they simply had a full batch of industrial grade cheese-byproduct liquid and decided to sell it to the general populi. Nah, couldn’t be.

The cheese drink can also be used as salad dressing. 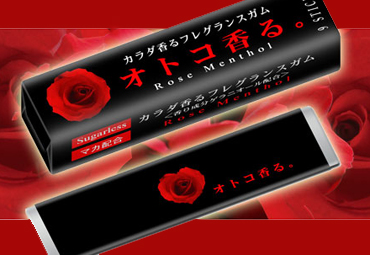 Aptly and yet very horrifyingly named “Otoko Kaoru” (“Man Smelling Sweetly”) this product is a brand of chewing gum that makes your sweat smell like roses.

Believe it or not, there actually is a very good explanation for this product. The Japanese spend a great portion of their lives in the overcrowded public transportation systems (according to my calculations, if you add the hours every Japanese man spends in a train and multiply it by a Billion, you get a really large number). Can you imagine what would happen if 50 of these old Japanese dudes started sweating their natural manly musk?

Suddenly the gum doesn’t sound so crazy after all. Hell, it should probably be made mandatory for some people. You know the type I mean. 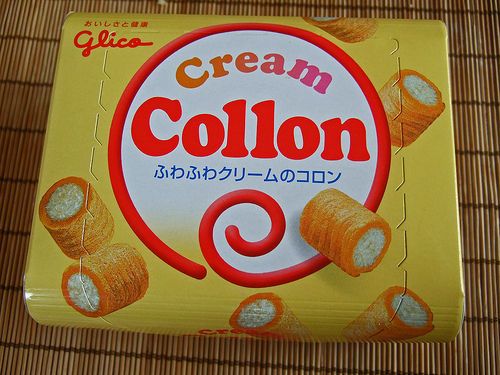 What would you do if I came in to your office (assuming you had an office and were the head of a major candy company) and proposed a new type of biscuit snack in the shape of small tubes filled with cream? You would probably let me keep talking, cause that doesn’t sound so bad. OK, but then just how many guards you would send after me if I said I wanted to name this new snack “Collon”, without the slightest bit of irony? 5, 20 guards?

If your answer was anything more than zero then sadly you do not have what it takes to be the president of Glico, the biggest candy company in Japan and the proud manufacturers of the Cream Collon snack. See Japan, this is why everybody is laughing AT you, not WITH you. It’s things like that. Ah, curry and lemonade, together at last! Wait, what?! This has got to be either a joke or some sort of Fear Factor merchandise tie-in. But we all know that is not the case, otherwise it wouldn’t make the list. No use fighting it, let’s just acknowledge that somewhere in Japan there is a person (a whole lot of persons to boot) who willingly swig curry flavored lemonade. Let’s now acknowledge that this is really freaky.

Oh, and look at the label: “A miraculous collaboration of curry and lemonade”. Can’t argue that this product is a miracle. This Curry Lemonade had to be devised, presented in front of a group of businessmen, taste-tested and then marketed. And during that time no one stopped to say “Guys, isn’t this product actually very strange?” A miracle if I ever saw one… 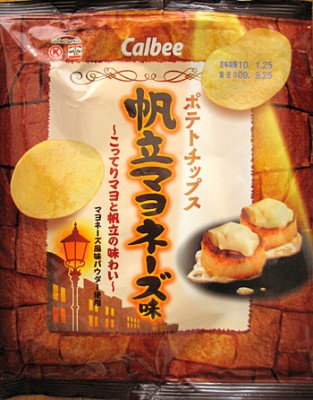 When I was a kid, we used to have these Ketchup favored crisps and even then I thought of that as a little bit weird, so imagine how I must feel about scallops and mayonnaise flavored chips from Japan. The answer: somewhere between “Ghwaa…?” and “Oh sweet lord, no…”

The fact of the matter is that the snack business in Japan is humongolarge. Unless you have literally millions of dollars to throw into a marketing campaign that will employ a new type of science ray that injects commercials straight into people’s dreams, the only way for your brand to stand out over there is coming up with really bizarre flavors. And thus, the Scallops & Mayonnaise Chips from Calbee were born. Just be thankful they didn’t go with their other idea: Dog Turd Crisps. 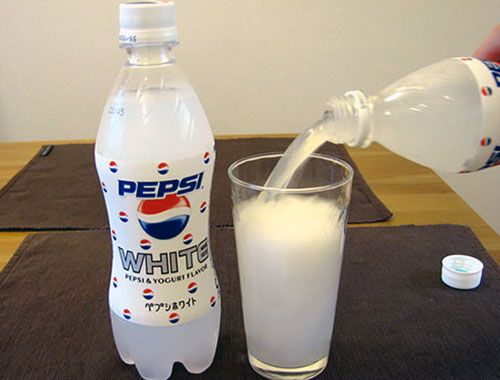 Same as with the snack business, you really need a gimmick in order for your drink to stand out east of China. This applies even to giants as Pepsi, who during the course of several years came up with such Japan-exclusive Pepsi flavors as: Yogurt, Cucumber and Shiso (which is something like a cross between basil and mint).

None of those really stuck around, proving that even the complex Japanese pallet could not handle such atrocities against God for long, but who knows what the future might bring? Pepsi is undeniably second to Coca Cola in Japan (they even sell Coca Cola brand water over there, believe it or not) so they will probably keep coming up with more and more original flavors. Pepsi Kitten Blood perhaps? Who knows?

This is a very sad entry…

These are actual crab babies we are talking about. Roasted crab babies. It might just be me but I keep getting this image of a Daddy, Mommy and Junior crab playing together in their underwater house when suddenly the kid is yanked out in a net and roasted alive for the gluttonous needs of sadistic Japanese. It’s sadder than 20 orphans watching “Bambi” for the first time. Let’s just move to the next item…

The “Surging Eel” fizzy pop is a carbonated yellow liquid made out of *SPOILERS* eel. It is produced by the Japanese Tobacco Company. No, it doesn’t make sense even to me, so don’t worry about it.

Now, I do have to acknowledge that the eel is a delicacy in Japan, but bottling and selling it as a soft drink has to be against some kind of law. Hell, if not court laws then I am willing to invoke the law of God if I have to. The western equivalent of this monstrosity would be… I don’t know, to bottle an entire Thanksgiving dinner in soda form? Which of course would never happen because no one is that crazy and… (http://en.wikipedia.org/wiki/Jones_Soda#Limited_Editions)…Dammit.

You see those? Those are, in order, Beef Tongue, Horse and Chicken Wings flavored ice-cream. HORSE!

There is absolutely nothing I could think of to excuse this. So OK, beef tongue is quite often eaten in Japan. It tastes simply delicious when cooked over some charcoals and washed down with a beer. Chicken wings? KFC is everywhere here. Then there is HORSE…!

I just don’t get it.

How in the world did any of those end up as ice-cream? Now that I think about it, I am starting to fear for my life. Because you know, if already the Japanese are scrapping the bottom of the idea barrel for new meat themed ice cream like HORSE and all, how long will it take them to try and package us, the foreigners, into the mix? Filthy-Foreigner Ice Cream… I can already see it.