Art is important. People who appreciate art typically marvel at its capacity to change their moods and make them think. Art takes us out of the mundane and celebrates human creativity and ingenuity. It’s a conduit for so much raw emotion, life experience and contemplation.

Most art fans can’t afford to spend exorbitant amounts of money on art from the masters, but they’d probably be interested in owning these exquisite paintings if they did have unlimited funds. These absurdly expensive paintings are indisputably status symbols for the ultra-rich, but they’re so much more than that. They became prized because of their beauty and individuality.

Thankfully, many very rich “one-percenters” do eventually decide to donate or lend pricey paintings to museums or art galleries, so everyone can enjoy them.

This iconic Pop Art painting was created in 1962. Roy Lichtenstein was one of the pioneers of Pop Art, alongside Andy Warhol, and was known for producing work with an upbeat vibe, whereas Warhol sometimes went to the dark side. Lichtenstein tended to stick to his signature comic book style, while Andy would experiment. Despite their differences, these two famous artists, both of whom have passed away, will be linked together forever, thanks to their memorable – and so collectible – contributions to the Pop Art movement.

Masterpiece features stenciled facsimiles of the distinctive Ben-Day dots found in the comic books of the Fifties. These compact colored dots were named for a printer and illustrator called Benjamin Henry Day.

So, who had enough cold, hard cash to buy this legendary painting for 165 million bucks? Well, a hedge fund billionaire, of course. His name is Steve Cohen and he paid this princely sum for Masterpiece in 2017. Cohen owns a range of exceptional paintings. His net worth is through the roof. He’s the type of guy who lists his New York residence for $33.5 million, and was once at the center of a pretty serious insider trading scandal.

This famous painting was produced during 1917 and it’s an oil on canvas nude from an Italian master. Created more than a hundred years ago, its sensuality startled and hypnotized art fans when it was first exhibited in Paris. The artwork was part of an important series of paintings by Modigliani, which gave the traditional nude a Modern feel. It is an Expressionist artwork which was the biggest painting that Amedeo Modigliani ever produced.

In 2015, Christie’s auctioned off this singular piece for an astonishing $170.4 million dollars. Now as notorious for its high price tag as its capacity to scandalize art fans back in 1917, it’s a perfect example of the artist’s unique portraiture style, which was largely centered on women with almond-shaped eyes and elongated face shapes. His paintings and sculptures challenged Western norms of beauty.  The artist met a tragic end at the early age of 35, due to tuberculosis. After his passing, his lover, who was expecting a baby, committed suicide.

This masterpiece was purchased by a man named Liu Yiqian, who use to drive a cab. He is renowned for paying record prices to access exceptional paintings. 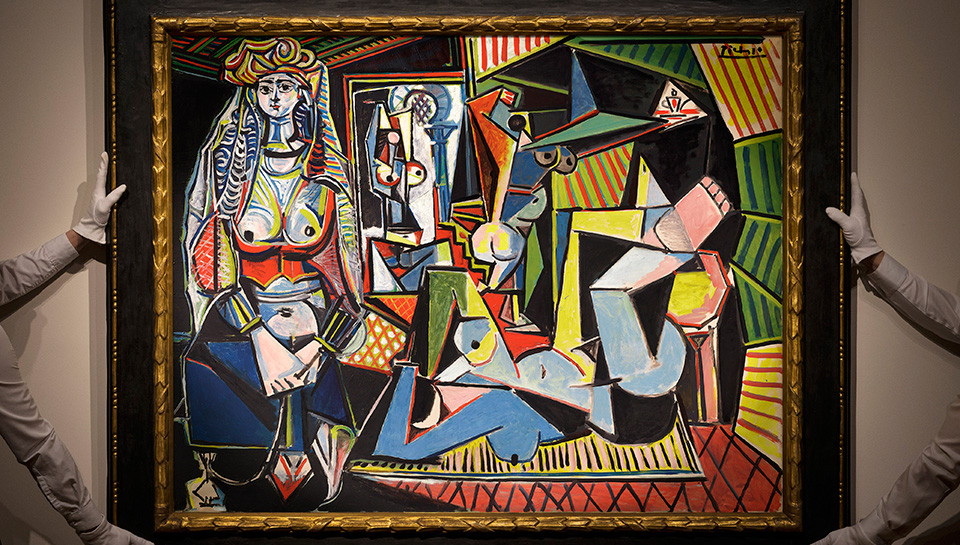 Version O is one part of the “Women of Algiers” series by Pablo Picasso. The series consisted of 100 drawings, as well as 14 paintings, and all pieces in the series were created in 1954 or 1955. Version O was the final work in the series.

Picasso’s series referenced a painting by Delacroix, which was called The Women of Algiers in their Apartment. In French, “women of Algiers” is “femmes d’Alger.” The Delacroix painting inspired Picasso. It depicted concubines in an Algerian harem. Picasso was determined to make his own version of the painting that he loved and so he did, with masterful results.

Version O is considered the most accomplished work of Picasso’s Les Femmes d’Algers series. Christie’s auctioned this unforgettable painting in 2015 and kept quiet about the buyer, but in-the-know insiders claimed that it was Hamad bin Jassim, who used to be the Prime Minister of Qatar. These full-length wedding portraits of a couple were painted by Rembrandt in 1634. Maerten and Oopjen likely had no inkling that their wedding portraits, which are always displayed together, would someday fetch the astronomical price of $180 million dollars at auction. While they may not have known just how valuable their paired portraits would become, they were probably as enchanted by the artist’s talent as other appreciators of Rembrandt are.

Rembrandt’s style evolved greatly during his lifetime, but his work in general is renowned for its intensity. There was a psychological component to how he studied his subjects. The light, technique, texture and situations in his work are endlessly fascinating.

Minimalist modernity can be extremely compelling and this contemporary masterpiece by Rothko is striking in its spare simplicity. The artist created his paintings in order to inspire contemplation from those who viewed them.

Rothko frequently wanted his pieces displayed in smaller rooms, without garish lighting, as he felt that compact settings with low-key lighting would make it simpler for art fans to become absorbed in his work. While his style is modern, it’s never cold or clinical. In fact, he had a passion for drawing the strongest emotions out of those who gazed at his canvases. He really wanted people to feel something.

No. 6 (Violet, Green and Red) stands out thanks to its delineated composition and hazy tones. The painting was created in 1951. Rothko wouldn’t stick with art movement rules, but most art experts put his work in the Abstract Impressionist category.

Dmitry Rybolovlev purchased this abstract work in 2014, for 140 million Euros, which equates to 186 million U.S. dollars. The Russian billionaire who bought No. 6 was later arrested during a large-scale corruption probe that took place in Monaco. This Abstract Expressionist work is worth a bundle. It’s safe to say that most painters don’t end up producing paintings that fetch $200 million at auction. All of those jokes about starving artists have a grain of truth. The unfortunate thing about the art world is that most artists don’t actually get these huge sums of money for their work, because their art is traded like stocks and bonds.

The New York Times reported that art dealers were quite relieved when this painting sold, alongside a De Kooning, for $200 million. The total expenditure for this private sale of both paintings was $500 million. The art market had been in a slump and this sale seemed to point to brighter days ahead.

Ken Griffin is believed to have purchased both paintings from music and entertainment mogul David Geffen. Ken is another hedge fund guy. The sale got media buzz in 2016. The Pollock painting was produced in 1948, and is a perfect representation of Jackson’s Pollock’s drip style, which he later moved away from. This painting is part of a series by Cézanne, and Qatar bought it for $250 million or so. When the deal went through in 2012, it was the most money ever paid for a piece of artwork.

This particular painting depicted a couple of French peasants partaking of a card game. The series featured five paintings in all. The other four may be found in a variety of world class museums, including the MOMA in NYC and the Courtauld in London.

Cézanne enjoyed painting landscapes, fantasy and figures. While he had a kinship with Pissarro and played a role in the development of Pissarro’s Impressionist style, Cézanne’s own work was contemporary, so he was difficult to categorize. He was a forefather of Cubism and Fauvism. In Tahitian, the title of this stunning masterpiece means, “Will You Marry Me?” The painting is the work of Post-Impressionist painter Paul Gauguin, whose work did not win acclaim until after his passing in 1903.

Gauguin was a French artist who was renowned for his innovative style. He created oil paintings and prints and also worked in stone and wood. This particular painting dates back to 1892, and for 50 years it was loaned to a museum in Basel, Switzerland. Gauguin had a taste for the primitive and enjoyed painting out of doors. He was known for using color in an expressive way.

Qatar Museums, in its quest to become a global power in the museum game, was believed to be the buyer, although the sale was hush-hush. The tab for this painting was 300 million dollars. The sale went through in 2015, which was definitely a pivotal year for insane art prices. This work of art may also be called Interchanged and it was painted, via oil on canvas, in 1995. Its creator, Willem de Kooning, was born in 1905 and lived until 1997. He was Dutch-American and painted in the Abstract Impressionism style.

This late and great master now has the distinction of creating the second-most expensive painting of all time. Interchange sold for $300 million in 2015. It was sold by David Geffen to fellow ultra-rich guy, Ken Griffin, as part of a half-billion dollar deal for Intercharge and a Jackson Pollock painting, Number 17A, which you’ll recall we touched on earlier.

This artist was revered, thanks to his gestural style, which really embodies Abstract Impressionism. He used vigorous strokes to create paintings that were dramatically abstract, which melded Expressionism, Surrealism and Cubism. Now, we come to the most expensive painting of all time. It is the work of visionary master Leonardo da Vinci. A painting has to be excessively special to sell for $450.3 million, and Salvator Mundi is very special, in part because this alluring masterpiece, which really draws the eye, has one heck of an origin story.

Considered to be perhaps the most surprising artistic rediscovery of this century, the painting has been around for 500 years. It re-emerged and was lovingly restored. Doubts were raised about its genuineness, but it was authenticated. The full tale of its provenance is long and colorful, and too detailed to share fully here, but it’s fascinating.

Believed to be painted for French King Louis XII, the painting changed blue-blooded hands repeatedly and then disappeared for two centuries. When it resurfaced, many thought it was a misplaced original which was masked by overpainting. In 2017, a Saudi Arabian prince parted with over 450 million dollars to become the owner of this thrilling masterpiece.