There are a huge number of communities online, and the range of conversation topics is limitless. Say you want to talk about sports—there are plenty of discussion forums out there for you. Interested in vacuum cleaners? There’s a site that has you covered. Looking to find people who love Japanese schoolgirls as much as you do? They’re just a click away. Most Internet communities are small and specialised, because there are only so many people in the world interested in a certain TV show or disgusting fetish. But the following ten are so big they’ve become Internet landmarks.

Half discussion forum and half picture rating site, BuddyPic is the place to be if you’re in desperate need of attention. Users are required to upload a photo of themselves before they can post, and most conversations come from people telling each other how attractive or ugly they are. There are more general topics of discussion too, but the vast majority of users spend their time ogling pictures of the opposite sex. And since this is the Internet, the board dedicated to looking at pictures of girls is way more popular than the one for checking out guys.

This whole operation could come crashing down the second one of them searches for “girls” in Google Images, but until then BuddyPic will be full of people looking for validation in the form of a high rating on the 1 to 10 scale and a few poorly worded comments from creepy people about how they would love to have intercourse with them. And really, isn’t that the foundation of all great communities? Something Awful is a massive comedy site that’s been in operation since 1999, and its forums have been famous for years. They’re unique in that they cost 10 dollars to join; some people balk at the idea of charging money for a forum, but it’s proven effective in keeping away those who just want to advertise or cause trouble. Something Awful has also been responsible for a wide variety of Internet fads, some of them hilarious and others… not so much. But on the whole, Something Awful combines great comedy content with well-maintained forums to be one of the most interesting sites the Internet has to offer.

Vault Network was created in 1995, back when most people had no idea what the Internet was because there wasn’t any pornography on it yet. In its initial format it was dedicated to talk about Ultima Online, a video game that had just been announced and went on to become very popular. Vault Network has since grown to the point where pretty much every major online role playing game has its own discussion board. Since hardcore fans of the online RPG genre are considered huge nerds with too much time on their hands, it’s pretty obvious as to how such a large community was built up. Sure, there’s probably more to it than stereotypes, but we think they’re the most important part.

Offtopic, as the name implies, is a community where users discuss pretty much anything they want. Wait, wouldn’t that make every discussion on topic? Whoa, hold on a second, we need to sit down; we just blew our own minds.

OK, we’re good. This site also has a subscription system, although free users can still access most of its content. And there’s a ton of content; any website that needs seven different forums just to discuss cars is either massive or terribly organised. We’re pretty impressed by how big this place managed to become considering there’s no unifying theme to attract members like the rest of the sites on this list; we guess there’s something about having permission to ramble aimlessly that lots of people find appealing.

FaceTheJury is ostensibly the second picture rating forum on our list, just in case you needed further proof that the Internet is populated primarily by perverts with too much time on their hands. However, this site hasn’t really been about looking at blurry photos of attention craving teenagers for quite some time. Instead, it’s fallen into a weird state of pseudo-anarchy, where a lot of very bored people flood the main forum with inane messages, terrible attempts at jokes, and a wide variety of slurs. Every time you refresh the page there are another half dozen posts along the lines of “coffee is great” and “I hate black people,” and nobody seems to care that they’ve created a wasteland. It’s like the Internet equivalent of Somalia, except with more dick jokes. 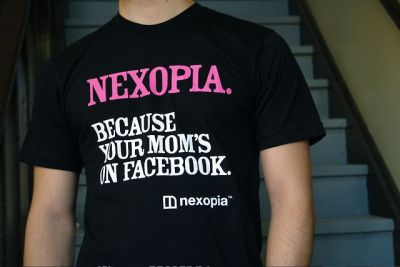 We’re surprised that Nexopia still exists, let alone that it’s the fifth largest online community. Its users are almost all Canadian; for Americans who are unfamiliar with the site, all you need to know is that it’s a social board that’s very popular among both teenagers and some very disturbed people.

The average Nexopia user is around 16 years old, so witnessing a conversation on the forums is sort of like being back in high school, except instead of a group of four or five girls chattering at once there are now four or five hundred. Discussion topics are pretty much what you’d expect at a site full of teens, ranging from complaints about family members to homework help requests. IGN is among the largest entertainment websites, so it’s no surprise that their community is well populated. Most of the discussions stem from video games, but there are also plenty of conversations about movies, TV and comic books. About half of the topics are just users whining about how a movie was disappointing or a game received unfair reviews, and while that sounds like an insult that’s actually a pretty decent ratio compared to other entertainment forums.

Surprisingly, cars are also a very popular topic of discussion, but we’re not sure if IGN’s users are genuinely interested in automobiles or just putting up appearances to combat the video game and comic book nerd stereotype the site would otherwise give off. It’s a losing battle, guys.

d2jsp started life as a forum to discuss Diablo II, a popular video game. Diablo II remains the focus of conversation today, which is impressive considering the game was released in 2000. But d2jsp (we have no idea what jsp is supposed to mean, incidentally) has diversified quite a bit, and it’s now home to discussions about many other games, other forms of entertainment, and general chit chat. It also has a huge international community; any forum with a special board just for Hungarians clearly has a very wide appeal.

The site even plays host to its own video game now, a free Internet based one called Ladder Slasher. Unfortunately, it’s not actually about fighting ladders, but that does give us a great idea for our own game.

Is there anything we can tell you about 4chan that you haven’t heard already? They’re infamous, and for good reason; we could dedicate an entire list to the pranks they’ve pulled. They do some great things, like tracking down people who post videos of animal abuse on YouTube, and some not so great things, such as bombarding people they don’t like with obscene phone calls and hate mail. They’re also responsible for a massive number of Internet fads; some hilarious, others terrible, and all carried on long after they’ve ceased to be clever.

This is it, the largest online community ever. There are 23 million registered accounts, and one million posts are made daily. So what sort of conversation topics could bring that many people together? Current events? Politics? Nah, they mostly talk about anime and video games. There’s also a lot of role playing, and a lot of aimless rambling.

If you haven’t already guessed, the majority of Gaia Online’s users are in their teens. In fact, as we write this, they have an entire board dedicated to members complaining about having to go back to school. The discussions there are as scintillating as you’d imagine.

You may laugh, but Gaia is a serious business: users can pay money to access all sorts of ways to customize their profiles. It’s an effective system, considering that Gaia’s target audience has a lot of disposable income. Add in a ton of free collectible items, flash games, and contests to get users addicted to the community, and you suddenly realize that the people who run Gaia Online are probably evil geniuses. Although the fact that they have to maintain a forum full of nerdy teenagers seems like adequate punishment to us.