This list is dedicated to all of the flabbergasted readers of my previous list, “Top 10 Things Better Than Sex.” If you can’t think of one thing that is better than sex, then I hope will enjoy this list about nymphomaniacs.

“Some things are better than sex, and some are worse, but there’s nothing exactly like it.” (W. C. Fields)

What is Nymphomania?
Famous sex researcher Dr Alfred Kinsey, rather cheekily, described a nymphomaniac as “someone who has more sex than you” (health23.com); however, sex addiction is a serious matter. Here is a toll free phone number you can call if you need help:

Now, back to our not-so-serious list… Here are ten interesting (and surprising) facts about nymphomaniacs: 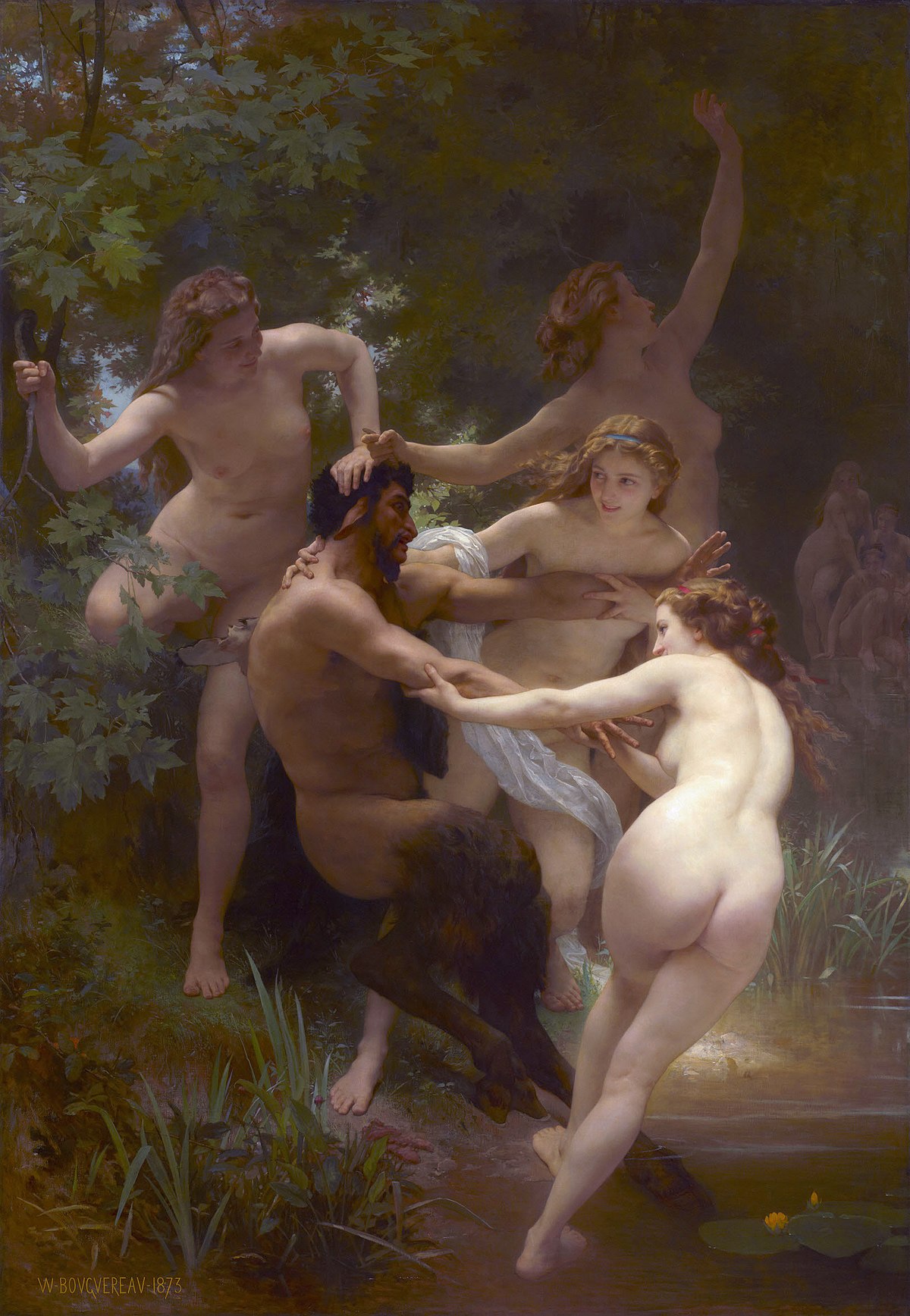 Why are we all familiar with the term “nympho” and not “satyro”? Is it because a woman who is unable to control her sexual desires is more exciting or more newsworthy than a man with the same problem? More likely, it’s because a willingness to engage in constant sexual activity is considered normal when it comes to men. In fact, historically, the female problem of nymphomania has been taken much more seriously than the male counterpart. Treatments have included “cold baths, bromide sedatives, cauterization and, yes, clitoridectomy” (Peter Green, “All Sexed Up”, Los Angeles Times). (Painting: Nymphs and Satyr, William-Adolphe Bouguereau, Wikipedia.)

The book “Nymphomania, A History” describes how Victorian doctors feared that “eating rich food, consuming too much chocolate, dwelling on impure thoughts, reading novels, or performing “secret pollutions”… overstimulated women’s delicate nerve fibers and led to nymphomania.” They were so worried about these delicate nerve fibers that “one critic even feared that the use of the speculum itself might so excite a woman’s passions that it could cause nymphomania” (Carol Groneman, Nymphomania A History). Obviously this critic was a man and had never had a pap smear! The same book quoted above also states that Phrenologists of the same time period thought “an enlarged cerebellum… indicated inordinate sexual appetite.” A visit to phrenology.org confirms that there are still people who believe in this study of head shapes. Phrenologists believe that “the faculty concerned with physical love and sexual attraction [is] on the lower back of the head, behind the ears.” The bigger your cerebellum, the bigger the back of your head- meaning you literally have too much sex in the brain. In contrast, The Encyclopedia of Psychology states that “scientists now recognize that the shape of the skull does not relate to the shape of the brain.”

The term “nymphomaniac” or “nympho” is no longer recognized in the medical world. According to health.discovery.com “the term… is not scientifically meaningful simply because there are no specific criteria that would define a nymphomaniac. In other words, there isn’t a way to determine how much sexual desire or activity is too much.” Instead, a person whose sex drive is obsessively high is called “hypersexual.” Other words used are “sexual addiction” and “compulsivity.”

Abnormal is the key word here. Research has shown that only “about 8% of the total population of men and 3% of women are sexually addicted [nymphomaniacs]” (allpscyh.com).

Back to Carol Groneman’s book Nymphomania, A History:
“In the Victorian period, both doctors and the patients who sought medical help believed that strong sexual desire in a woman was a symptom of disease. Self-control and moderation were central to the health of both men and women, but women’s presumably milder sexual appetite meant that any signs of excess might signal that she was dangerously close to the edge of sexual madness.”

Headlines still support this belief that one false step will send a “normal” woman spiraling into an over-sexed state. Last month the Daily Star reported that a woman was claiming that a fall from her Wii Fit board turned her into a nymphomaniac (Emma Wall, “Nintendo Wii Made Me a Nympho!”, Daily Star). Apparently nymphomania can be a sports injury as well.

In another recent case, a nymphomaniac became the victim of her doctor’s inappropriate bedside manner; he lost his license when he started paying house calls to his nymphomaniac patient. (“Indian-origin Oz doc gets deregistered for having sex with ‘nymphomaniac’ patient”, Asian News International [ANI]).

5. Nymphomaniacs Are Not Great Girlfriends

A nymphomaniac girlfriend might only be great material for a movie, a letter to Playboy, or a fantasy. Real life isn’t as fantastic: at worst they have a serious medical condition; at best they are exhausting…

Here is some handy advice from a website called midlifebachelor.com:
“Get what you can out of your relationship with a nymphomaniac woman – and be prepared to cut your losses in a hurry, and move on… sleep with her quickly, and then vanish into thin air as if you were never there to begin with.”

What lovely advice! I’m sure all of you single ladies out there want this gentleman’s phone number…

4. Nymphomania Is A Sin

Hinduism
According to filmmaker and sex addict (his 2006 film is called “I Am A Sex Addict”) Caveh Zahedi,“There’s the idea in Hinduism of a negative path to God… Instead of doing good, you do really bad… And arguably sin is a better path because you learn more deeply what it is you’re dealing with. They say the worst sinners make the greatest saints.” (Kevin B. Lee, Caveh Zahedi: Interview With A Sex Addict, Slant Magazine.) (Infographic: buzzfeed.com)

3. Nymphomania Is Not A Sin

Alfred Kinsey said, “the only unnatural sex act is that which you cannot perform” – and some religions see nymphomania as a route to redemption or a celebration of marriage.

Christianity
Check out christiannymphos.org, whose mission is “to teach married women to walk in sexual freedom with their husbands.” If, when you think of toys and church ladies, you think of a nice elderly lady selling hand-knit doll clothes at a church bazaar, the “toy reviews” at this site might knock your socks off. You can also participate in weekly polls, such as “Where is the most interesting place you would like to [make love] to your hubby?”

Buddhism
“There is not really any ‘good’ and ‘bad’ in Buddhism; there are just actions that bring us greater happiness and those that bring us greater pain,” explains Peter Morrell in his article ‘A Buddhist View of Addiction” (homeoint.org). Addiction, including sexual addiction (for our purposes, nymphomania) is “seen as an overactive desire sense, that has gone way beyond normal limits.” (Image: movie poster for sale at moviegoods.com)

While the idea of nymphomania has it’s obvious attractions, it can actually be very dangerous (and expensive). Also, while celebrity sex addicts make headlines and it all seems very exciting, I think it’s important to note that “60% of sexual addicts were abused by someone in their childhood.” (Roschbeth Ewald, “Sexual Addiction,” Allpscyh.com)

Here are some negative consequences of sexually compulsive behavior:

“I need sex for a clear complexion, but I’d rather do it for love.” (Joan Crawford)

Think about it, if you are compelled to do something frequently, do you enjoy it? I mean, I love eating chocolate as a treat, but if that’s all I did all day long I think I’d get bored of the flavor pretty fast! So what if you can’t stop eating chocolate, even though you know you’re hurting loved ones, your career, spending all your money, and possibly even sending yourself straight to hell?

Hmmmm, maybe I should start referring to myself as a chocolamaniac….