Post-World War II Russia’s struggle to prove the supremacy of their Communist political system went far beyond the boundaries of an ideological fight, and reached astonishing levels. Communist engineers were forced to deliver the absolute best automobiles imaginable, in order to back up Stalin’s vision.

Below are the best 10 cars built by the Russian Communists, in their self-imposed competition with the Western world.

The GAZ M21 was a Soviet automobile produced between 1956 and 1970, developed as an answer to the best-selling American car, the Ford Mainline. The car was fitted with a 2.4 liter, 75 bhp (break horse power) engine, which was capable of delivering a 0-60 mph acceleration of 20.1 seconds, and a top speed of 83 mph. 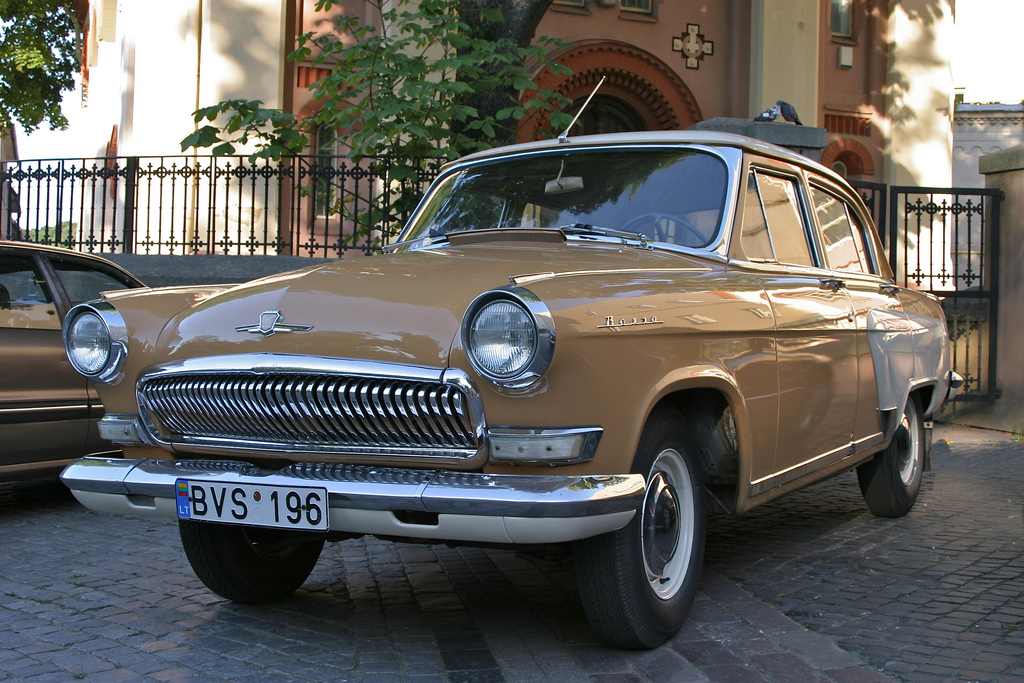 GAZ’s large size, and tough construction, made it popular in the police and taxi trades. There was even a high performance V8 engine version (named GAZ M 23) produced for the KGB, fitted with an automatic transmission.

Even though this car never reached the fame of the Ford Mainline, it is still considered an iconic vehicle with fans all over the world, including in the USA.

This rear-engined Czechoslovakian car was produced between 1970 and 1980, aiming for the more famous Saab Sonett. Although its 1.1 liter engine produced only 52 bhp, Skoda marketed the 110 R as a sports car. To this end, the gear lever was cross-drilled. Whether this was in the interests of weight-saving, or just for looks, was up to the driver to decide. Due to its unquestionable and perennial good looks, a famous Czech car designer has recently imagined a modern version of the car, which would fit wonderful in any modern garage. But, in an ironic twist of fate, the revival of the 110 R depends on the decision of the “capitalist” Volkswagen Group, which is now the main shareholder of Skoda.

The “Ukrainian Land Rover,” as the 969M has been often called, embodies the quintessence of the Cold War, being a Soviet off-road vehicle designed especially for military purposes. However, due to its off road capabilities, practicality and low cost maintenance, the LuAZ 969M also became a bestseller among farmers, hunters and countryside fans.

The standard engine is a 900 cc water cooled V4, capable of producing 39 bhp and the “astonishing” speed of 53 mph (not very useful when you are trying to flee from the Imperialist Army.)

Despite being a very rare and exotic vehicle, today a used 969 is quite a bargain, as it can be bought for under 2,500 USD over the internet.

Produced between 1966 and 1988, the Wartburg 353 was an East German medium-sized family car, powered by a very agile (for its time) 1 liter engine capable of delivering 50 bhp, and a top speed of 81 mph.

As soon as it came off the assembly line, the 353 became a remarkable success throughout the Eastern block. The reason was simple: for the same amount of money, it outperformed all the other Soviet vehicles in its class, in every aspect: engine performances, safety, ergonomics, handling, and maintenance costs.

Throughout its 22 years of production, the Wartburg 353 has been sold to over 1 million customers around the world, and a lot of them are still driving them today.

Due to its undisputed qualities in the off-road, as well as its simple and rugged looks, the Jeep Willys qualified as the iconic vehicle of the American Army during the Second World War. After the war, the Soviets could not remain indifferent to this new type of vehicle, so they developed the GAZ 69, which was produced between 1953 and 1975 under different names (GAZ, UAZ and ARO). 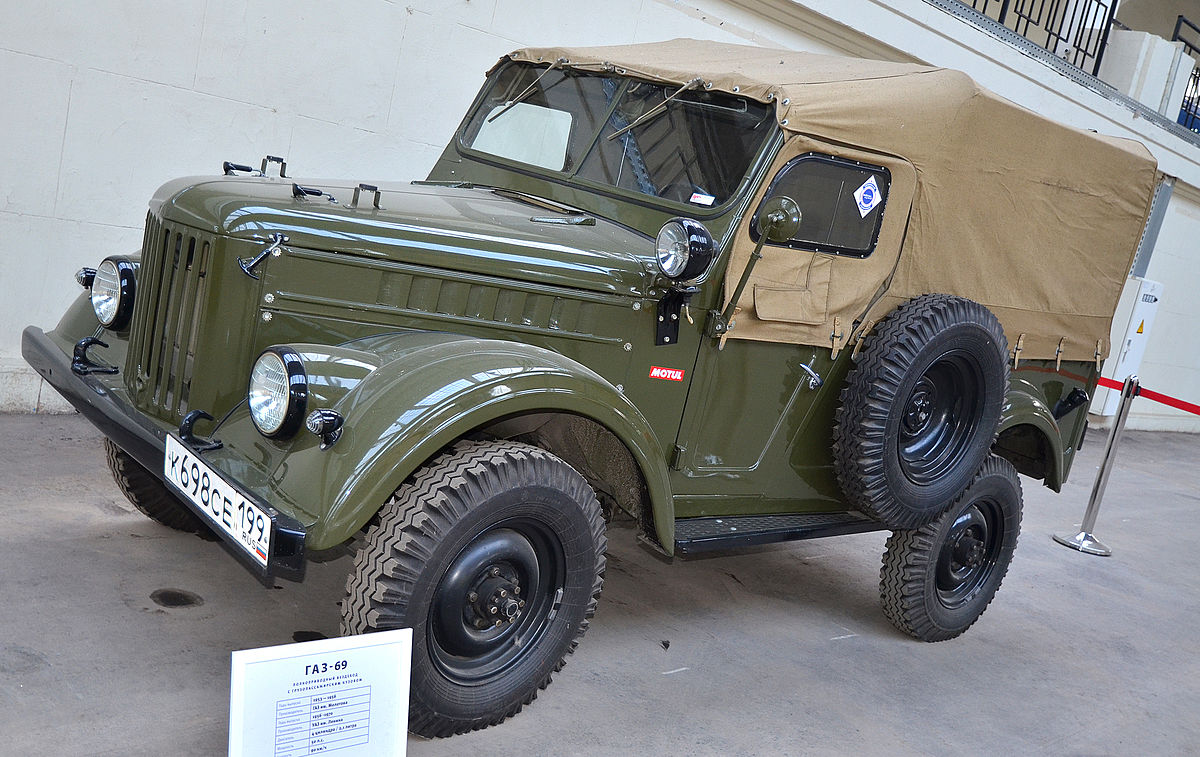 Like the LuAZ 969 M, the GAZ 69 was a 4WD vehicle initially created for the Red Army. It had a 2.1 liter engine capable of producing 54 bhp, and a maximum speed of 56 mph with a 11 mpg fuel consumption rate.

Not exactly a high tech piece of machinery, even for those days, but it was a great success nonetheless, being supplied to all Eastern European armies, exported to 56 countries, and also built in North Korea.

This 0.6 liter-engined, low-cost vehicle was produced in East Germany for a period of 27 years (between 1963 and 1990,) with virtually no modification.

The production started when when the Soviet Union realized they had a large amount of cotton and plastic waste that they didn’t know what to do with. So they sent it to their East German comrades, so they could build themselves a car. The Germans combined the cotton/wool waste with recycled plastic and resin, calling their new solid-ish (and extremely flammable) material “Duroplast”. Some say it was the first ever eco-friendly car, being the first to use recycled materials in its construction.

Despite the fact that the Trabant was a common target for malicious jokes of the time like “What does 601 stand for? Space for 6 people, comfort for zero, and one needed to push it,” it remains an iconic Communist car, with millions of fans all over the world.

The Dacia 1300 was a Romanian car manufactured between 1969 and 2004, acquiring the tooling and basic designs from its Western counterpart – the Renault 12.

The two cars were basically the same, minus the different badges and trim lines, making the Dacia 1300 one of the most modern mainstream automobiles in Europe at the end of the ’70s.

The engine was a classic 4-cylinder 1.3 liter, capable of delivering 54 bhp and a maximum speed of 86 mph.

Although the Dacia 1300 was never a high-comfort or high-performance car, its low fuel consumption and reliability made it a very popular model among the commies.

The Lada Riva is the most prolific Communist car on our list, being assembled in four countries between 1980 and 2012. The Riva was equipped with a variety of petrol engines, from 1.2 (67 bhp)  to 1.7 (84 bhp), which made it a competitive family car for its time.

Although the car has been mocked on numerous occasions by the capitalist press, this did not alter its success on Western markets. The Riva sold very well in the UK in places like New Zealand, where it was distributed by the New Zealand Dairy Board, which had previously received it in lieu of cash payments for deliveries of mutton and butter to the Soviet Union.

By the end of the 1960’s, the Communist leaders became really annoyed that their own production limo, the ZIL 111, was becoming outdated, thus forcing them to drive around in US-made limousines. In fact, they were so disturbed by this, that they immediately ordered the production of a Soviet limo. The ZIL 114 was born.

The ZIL has become such a symbol of Soviet nomenclature that President Vladimir Putin has his own custom-made ZIL to drive around in.

This 1958 Czechoslovakian model was not a very common car in the Eastern block, nor it was a Communist answer to any best-selling Western vehicle. The Tatra 603 was such a rarity on the streets, that ordinary people were considered lucky to even see one.

So why is it number one? Well … just look at it! The 603 looked a lot like a domesticated UFO mixed with a Salvador Dali painting, proving that the Commies were not entirely cold-blooded robots looking for trouble. We must admit that the creator of this car was a pure artist and, try as you might, you will not find a Western car (past or present) that compares to the Tatra in any way.

Besides its looks, the 603 was also a high performance vehicle of the time, being pushed by a V8 2.5 liter engine (99 bhp,) capable of reaching speeds of 106 mph.

Today, this car is a very rare and appreciated vehicle among US car collectors.

Andrei Dina is an experienced Romanian lawyer, and a passionate freelance writer. You can reach him via Google+.