Cable TV, the Internet, and print all enjoy the same advantage: being able to target insanely specific groups of people so they can sell ads to them. Due to this model, we undoubtedly end up with just the stupidest stuff imaginable exclusively tailored to crazy people, because unfortunately their money is just as good. Magazines are no different, and perhaps even worse, as it seems now that nobody’s paying attention to these antiquated offline collections of pictures and articles, they’re free to publish just about anything their little hearts desire. Here are ten magazines that just plain shouldn’t exist, for a variety of reasons. 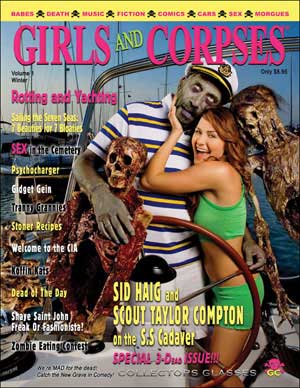 Having possibly the most accurate title ever, Girls & Corpses is exactly what it sounds like – a magazine filled with pictures of pretty girls and dead things. Publisher and “deaditor-in-chief” Robert Rhine got the idea when girls would ask to take pictures next to the fake corpses at his graphic novel booth at Comic-Con. It works because, according to Rhine, “you can put a beautiful girl next to anything and sell it — even a corpse.”

To be fair, Girls & Corpses started as a parody publication, poking fun at Maxim and others, but other than the prop zombies, everything inside is real. The magazine features morbid articles about celebrity death, funerals, mummies, death row prisoners and horror films. To give you an idea of how twisted some of the stuff is: when his business partner was mauled by a bear, Rhine featured the bear in the magazine. So, sure, it’s a bit tongue-in-cheek, but this magazine is totally real, and its existence is totally depressing.

A magazine about fashion dolls makes sense on the surface. There are stupider hobbies that have their own publications, after all. But what really gets us is how ridiculously creepy the magazine covers of Fashion Doll Quarterly are. All of them involve dolls in realistic poses, and it’s incredibly unsettling. The eyes are just…no.

In every industry, you can usually find a trade magazine specific to its interests. To the outside observer it seems like it would be a boring magazine, but industry executives use them to observe business trends and to share ideas.

Then, you have Portable Restroom Operator. How could anybody who works in the porta-potty industry want to have anything to do with them off the clock? It’s literally a magazine about how to collect crap more efficiently. Luckily, the entire March 2013 issue is readable online (please take a moment to thank the comedy gods for this). Inside, you’ll find enthralling articles, such as one showcasing the porta-potty team that has to quickly set up during a marathon race in Oregon, and…that’s basically it. 95% of this magazine is ads for porta-potties.

Then you have the covers, which almost exclusively feature people happily posing in front of a porta-potty. They all look like unfortunately-shot cell phone pics from CountryFest. 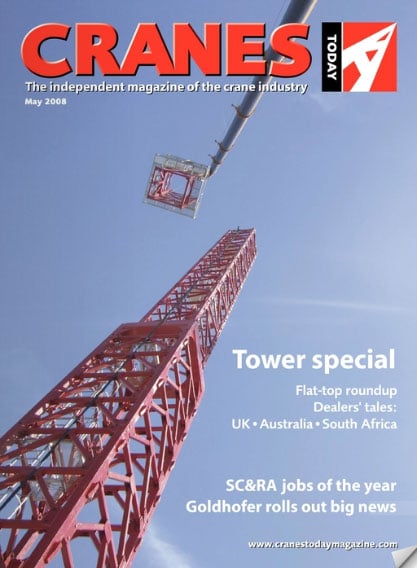 Cranes Today is another ridiculously specific trade publication that cannot be explained to an outsider. It appears to be a monthly publication about cranes. Were not sure what you could write every month about cranes, or even how much the technology has really changed. Big trucks lift other big stuff, lather rinse repeat.

Well, there is a sample issue, but what kills us is that they publish 80 pages of crane articles, every month. Again, there are a lot of ads, but there is a picture of a crane on pretty much every page. So many mutha-flippin’ cranes. What news is there even to report about cranes? Maybe this is just Playboy for construction workers and we’re not perverted enough to get it. 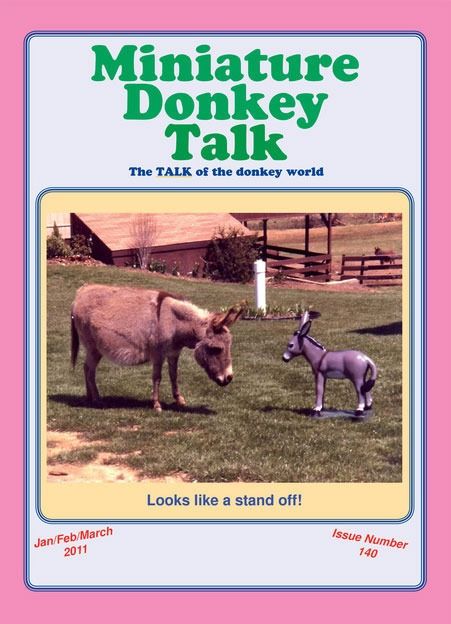 This is a monthly magazine for owners of small donkeys, because it’s not like donkeys haven’t stayed the exact same for 30,000 f^$&^(& years or anything.

There is a full sample issue available, but interestingly, the main articles are blurred out. You can still read all the letters, ads, jokes, some of the minor articles, and see all the pictures. For example, one of the first ads is for a book called “Caring For Your Miniature Donkey.” This ASScyclopedia (their joke) claims to be the only book ever written about how to care for a miniature donkey, so you’d think its existence would render a monthly magazine about the exact same thing completely obsolete. Apparently not though, which explains why we’re not the donkey ASSperts (see? We can do it too.)

There’s also a letter that is supposed to be written by a donkey with some weird southern accent, and it’s about giving birth and Jesus. Then there’s the joke section, and none of the jokes are about donkeys.

The magazine stopped printing a couple years ago (its now online, thank god), but you can order back issues that feature traumatized children in their purest form. At least it’s something concrete they can point to during therapy, as the exact moment all theit problems began. 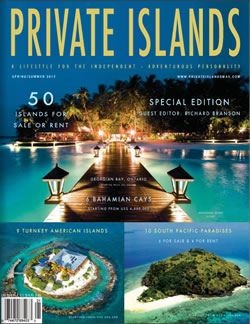 On the exact opposite end of the spectrum, we have the magazines for the ultra-rich. Forget yachts and mansions – we’re talkin’ Private Islands rich.

The sample Winter 2013 issue (guest edited by David Copperfield who apparently now owns a private island) contains a plethora of real estate and travel information. Let’s be clear about one thing – the kinds of people who legitimately read Private Islands magazine live in a reality that we will never comprehend. For them, having a butler who doesn’t also have his own butler is a sign of peasantry. And all the advertisers know this. One of them proclaims that owning your own island is easier than you think, ignoring the morally questionable things you would have to do to even come close to having that much money.

The magazine is just pictures of islands that you can buy, front-to-back. It’s beautiful, but it’s also guaranteed to make you feel like a failure. You can’t order them from the magazine itself, so we’re not sure exactly how you go about purchasing one of these things. What, do you go to privateislandsonline.com and just fill out a form? Speaking of luxury, this issue of Kohl, a Middle Eastern magazine that targets Asian women, claims the record for the most expensive magazine ever sold, after it was auctioned for $10,000. Why so expensive? Probably because it was covered in jewels: a craftsmen spent 86 hours applying 600 diamonds and 90 grams of gold to the cover. The auction was to raise money for a therapy center in Dubai. It also functioned as a way to determine the richest idiot in the room, because he bought a magazine he can’t even open. The publishers should put the entire issue online, and charge him a subscription. 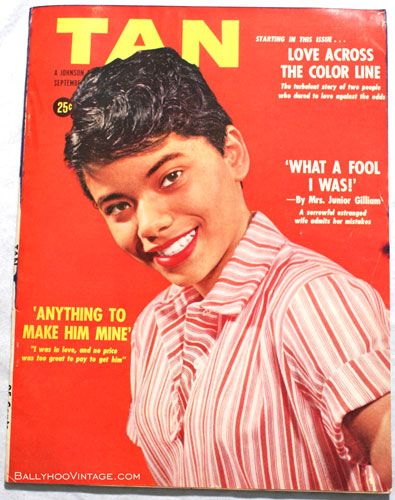 We’re just gonna warn you right now – none of the links in this section are even close to being safe for work. Tan Magazine is an Australian nudist – sorry, “naturist” – aficionado magazine. Not surprisingly, it’s full of beach reviews, naked people, classified ads, and … recipes? We’re assuming none of them involve hot grease.

Of course this isn’t just some smut rag – those of you just looking for some naked women should be prepared to see an equal amount of male genitalia. Luckily, the people that actually subscribe to this read it purely for the articles.

Wow, a trade magazine more ridiculous than Cranes Today? Sign us up!

Yes, there’s a quarterly magazine called Fencepost and it’s literally about fences. It’s published by the American Fence Association, which apparently has it’s own convention in Las Vegas (March 4-8, 2014. FenceTech! BE THERE.) The cover story of the most recent issue explains how residential fences are totally hip now. “Could this be the year for residential fence [sic] to make a comeback?” Well, is it 1955? Then maybe yes. Unless you’re actually telling us that fence technology has changed any in the last 50 years. We’re pretty sure it’s still just a bunch of wood and paint. Plastic if you’re nasty.

This one has to win the prize for the most messed up magazine ever created. While Girls & Corpses deals with the macabre in a light-hearted way, Serial Killer Magazine is totally serious. We warn you now: If you visit that site, you will wish you were never born.

According to the site, Serial Killer Magazine is “chock full of artwork, rare documents, FBI files and in-depth articles regarding serial murder.” If that’s not enough fun for you, there’s a crossword puzzle. For only $20 an issue, you’re treated to insightful articles like “Is My Son a Serial Killer?” and “Lyrics to Songs Written by Charles Manson.” Have you long pined for a comic featuring a young Jeffrey Dahmer? There’s a mag for that.

The site also brags that it has the “world’s best serial killer merchandise,” which isn’t really a title someone should be proud of. You can get a collection of serial killer trading cards if you’d like to scare away every potential friend you could ever have.

We didn’t include a link to the magazine’s site because you might well be put on a government watch list for just clicking on it. Needless to say, if you ever visit somebody with a copy of Serial Killer Magazine laying out on their coffee table, run. Run so far and so fast that you forget what year it is.