It’s no secret that Hollywood loves Shakespeare.  The Bard was one of the most prolific writers of all-time, and his works are transcendent pieces that have always, and will continue to, stand the test of time. From Hamlet to Romeo and Juliet to A Midsummer Night’s Dream, his influence is still present in all facets of life to this day, including the movies.  Some movies are pretty straightforward when it comes to honoring the Bard, while others are a whole lot more subtle.  Here are the top 10 movies you didn’t realize were based on Shakespeare plays: 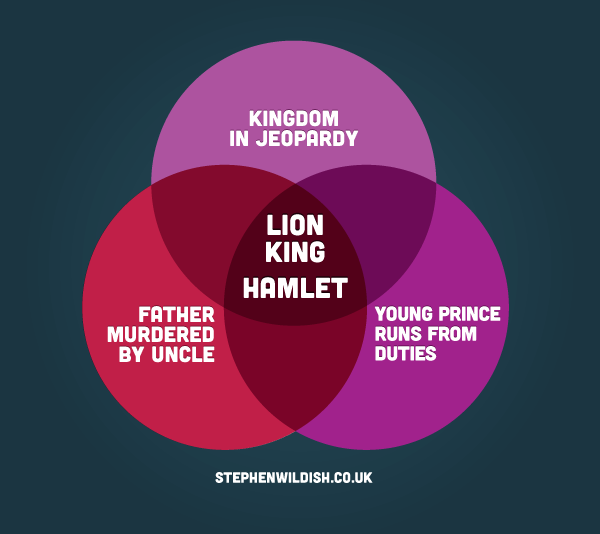 Okay, here are a couple things about one of the most famous plays of all-time, and one of the most beloved Disney movies of all-time.  One is about a son whose father is the king, and whose father is betrayed by his own brother and killed.  The boy discovers the truth when the spirit of his dead father speaks to him, and he decides to avenge his father’s death, which ultimately leads to his uncle’s demise.  The other is Hamlet.

When you stop and look at the plot and structure of The Lion King, you’ll notice the stark similarities and discover that the film is actually based on the play by the Bard.  The notable exceptions between the two are that, well, The Lion King is about talking, singing animals, and Hamlet ends with pretty much everyone getting killed.  Apparently Disney didn’t think they could sell as many plush toys to kids if they killed off Simba

10 Things I Hate About You, which featured a stellar young cast that included Heath Ledger and Joseph Gordon-Levitt, is based on the Bard’s play The Taming of the Shrew.  At first glance it’s just another one of those corny teen movies that came out right alongside the glut of teen movies in the 1990’s, and pretty much all anyone remembers from it is the scene where Ledger sings to Julia Stiles.

The film rips the plot pretty much straight from the play, with a girl who wants to start dating being forbidden by her father until her older sister also starts dating.  Gordon-Levitt wants to date the younger sister, so he gets Ledger to woo Julia Stiles, in the role of the titular shrew in order to clear the path for his own romantic pursuits.  As far as teen movies go, 10 Things I Hate About You wasn’t terrible, and stuck surprisingly close to the source material.

This one is probably the most obscure film on the list, but was directed by legendary Japanese director Akira Kurosawa.  Kurosawa actually made several films based on plays written by Shakespeare, but it’s also the most subtle of the lot, considering it’s set within the world of 1960’s corporate Japan.

In addition to being based on Hamlet, Kurosawa also used the film as a venue to examine corporate corruption, to which the plot of Hamlet lends itself remarkably well.  Instead of a king being killed and his throne usurped by his brother, here you have the power struggle at the top of the corporate ladder leading to murder, and a plot for vengeance.  It’s a strong tribute to Shakespeare, and we’ll even forgive Kurosawa for not finding a way to sneak in a little kung-fu and/or samurai stuff somewhere along the way.

Hey look, it’s another cheesy teen movie, this time starring former child star, and current Lindsay-Lohan-in-training, Amanda Bynes.  In this film, Bynes plays a character named Viola, who disguises herself as a boy in order to play on the boy’s soccer team.  Not surprisingly, she falls in love with her roommate and has to convince him she’s a girl by flashing him.  If this sounds familiar, you’re probably thinking it sounds exactly like Just One of the Guys or a gender-reversed Ladybugs.  Or, you know, it could be that it’s based on Twelfth Night, because it is.

In case you needed further evidence, all you have to do is take a look at, well, every single name in the movie, which are all lifted directly from the play.  Viola, Sebastian, Olivia, and even the name of the high school, Illyria, is named for the island on which Viola and Sebastian are shipwrecked at the beginning of the play.  We just wish all Shakespeare plays were resolved by a hot girl flashing her rack at someone.

We’re going to go ahead and guess that you didn’t realize this many teen films were based on Shakespeare.  We’re hoping they were all made in an effort to trick high school and junior high kids into enjoying Shakespeare, but it’s more likely that the people who write teen comedies just aren’t very creative.

Get Over It, starring Ben Foster, is based on A Midsummer Night’s Dream, and actually attempts to get a little bit meta with a plot that revolves around a group of kids attempting to put on a musical version of that same play.  The structure obviously doesn’t directly echo A Midsummer Night’s Dream, which is a play that has a whole lot going on, with three intertwining stories and a lot of fantastical elements, but the fact that virtually everything is based around putting on a production of that play, or a bizarre adaptation of it, certainly qualifies this film for inclusion on the list.

5.  My Own Private Idaho

Made in 1991, My Own Private Idaho starred Keanu Reeves and River Phoenix, and was initially based primarily on a 1963 novel called City of Night, combined with Gus Van Sant’s own experiences and a script he had been working on.  The new hybrid script told the story of two “street hustlers,” which is a nicer way of saying gigolos, and their various misadventures trying to make it in Portland and, eventually, en route to Idaho.

According to Van Sant, he viewed the characters and their predicament as being similar to those in Henry IV, and went all out with a script rewrite, making it abundantly clear that the film was now much closer in narrative to Henry IV than to the original source material, to the point where he eventually had to tone down the Shakespeare, because even the dialogue was a little too Bard-like.

Who doesn’t love a modern, and much more urban, update on a Shakespearean classic?  That’s what you get when you watch the 2003 film Deliver Us From Eva, which is the first, and last, time anyone ever thought they’d see LL Cool J basically performing Shakespeare.  The film is based on The Taming of the Shrew, and features LL being hired to woo a feisty young woman, played by Gabrielle Union.

The plot differs in that Eva’s sisters are already in relationships, so their own romantic happiness does not hinge on whether or not she’ll find love of her own.  However, just like with Katherina in Shrew, Eva is a headstrong and stubborn woman, who is initially reluctant to fall for LL’s charms.  Of course, since it’s a romantic comedy, naturally she does, and thus the shrew has been tamed.

Who would have thought that the first film set entirely in outer space, one of the all-time classic science fiction movies, was actually based on Shakespeare?  Forbidden Planet, released in 1956 and starring Leslie Nielsen before he decided that he’d only make slapstick comedies, tells the story of a father and daughter who are stranded on a remote planet, which is then visited by a group of astronauts.  Sound familiar?

The major plot points are virtually identical between The Tempest and Forbidden Planet, with the latter merely replacing “remote island” with “remote planet,” and “sailors” with “astronauts.”  Obviously there are differences littered throughout the film, and warnings against the dangers of technology, and how the heroes were assuming the monstrous threat was coming from an exterior source, rather than an internal one.  Of course, both of those things make sense, since the film was released during the Cold War and the Red Scare, making it both an adaptation of The Tempest, and something of an allegory for the looming threat of war between two superpowers with largely untested and dangerous technology at their disposal.

We know what you’re thinking, and yes, Pocahontas was indeed based on perhaps the most famous female Native American in history, though her story has been so romanticized over the centuries, that it’s hard to know where the truth ends and the legend begins.  That’s why it’s so easy to believe that Disney based at least part of their film on The Tempest, with Captain John Smith playing the part of the shipwrecked sailor, who is here captured rather than shipwrecked (as happened, as far as we can tell, in real life).

Pocahontas created a fictional romance between the titular character and Smith, which mirrors the love story that takes place in The Tempest between Miranda and Ferdinand.  Ironically, the real-life shipwreck of Pocahontas’s future husband, John Rolfe, is thought by many to have been the inspiration for Shakespeare as he wrote The Tempest.

Would you believe a film about a couple of drunken Canadian brothers, who wind up working at a brewery run by a madman who uses tainted beer to get mental patients to play hockey and fight via mind control, is actually based on Hamlet?

It’s actually got nearly all of the elements mixed throughout the film, when you really stop and look at it.  Strange Brew involves a brewery owner who is murdered by his brother.  The brother turns around and marries his sister-in-law who, in a case of gender reversal, has a daughter who speaks to the spirit of her dead father when he zaps out of a malfunctioning video game.  Yeah, it’s a little weird.  If you’re writing it off as all just a big coincidence, did we mention that the name of the brewery is Elsinore?