Top 10 Portrayals of the Dragon Smaug

One of my favorite books growing up was The Hobbit, so imagine my excitement when I heard that it was going to become a movie from Peter Jackson! My excitement was great! And then I heard it was going to be a trilogy! My excitement diminished greatly. It’s not that I think that a trilogy, or even a duology, would be a bad idea. I just hate the idea of waiting a year between movies, again. I put my time in already with Lord of the Rings, which was physically painful to one such as myself. Of course, my nerdy nature overrode any qualms I have with dividing up the book as I tried to imagine what were good “stopping” points. As soon as I started, I immediately regretted my actions as I came to an obvious conclusion. Smaug! The all time greatest dragon ever! I was going to be lucky to get a good shot of him in the first installment! Peter Jackson had already denied me a satisfactory initial shot of my other favorite Tolkien villain (Smeágol/Gollum), so why would he change his MO now? With my griping being griped, I decided that the best way to bide the time, along with everyone else who shares my position, would be to treat myself to visions of Smaug The Magnificent! before my favorite hobbit does. Here is my top 10 list of artists who have illustrated Smaug in ways that Tolkien would be proud of! (Titles are given where they are found.)

Writer’s note: In honor of the second installment being released today, here’s a little taste again. While the trailers have wetted my appetite, still any satisfying glimpse of my favorite fire breathing menace has yet to come. I guess these will still have to do. As a side note, Benedict Cumberbatch can never replace Richard Boone in my heart as the voice of Smaug, but I certainly give him permission to try! 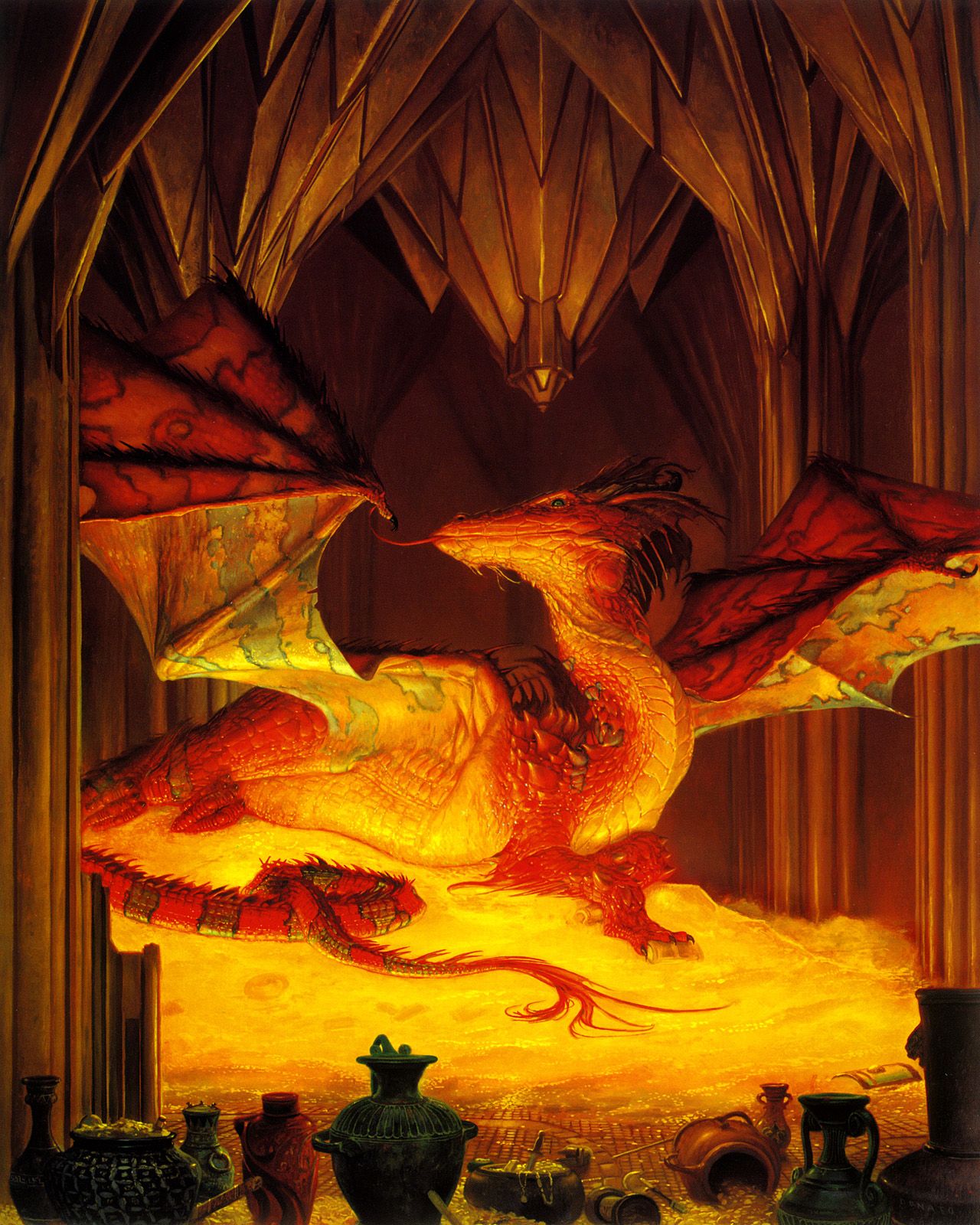 Giancola, a popular sci-fi and fantasy artist, absolutely captures the exotic reptilian nature of Smaug in his work, The Great Dragon Smaug. You can see the cunning in his expression, eying the viewer with something suspiciously like a dare. The idea of Smaug being dappled and striped with many colors like a snake is not one that is seen often in dragon art, despite the fact that they are reptiles. His second Smaug piece, Smaug: The Golden, is a more “traditional” taste of dragon imagery. This isn’t Giancola’s first foray into Middle-Earth. In 2002, he had an art exhibit at his almost-alma mater, University of Vermont, titled ‘The Art of “The Lord of the Rings.”‘ If you visit his website, he has a remarkable gallery devoted to character portrait sketches, as well as more detailed illustrations. Not only that, but he has a book of his Middle-Earth art for sale called “Middle-Earth: Visions of a Modern Myth.” Sadly, I was unable to find a whole lot of information about this incredibly talented artist, although he does have a wonderfully informative blog which I highly recommend any artistic geeks to peruse at their leisure. In Gerard’s blog, he will detail each step involved in a piece of art, as well as any difficulties he encounters and how he solves them. My personal favorite is in a fresh look at the dwarves and trolls in The Hobbit, wherein he imparts some funny advice to other artists who find themselves trapped in “the triangle of death” – when in doubt, add more trees. All of his work that I have seen look like they belong in a children’s book, which is unsurprising as that seems to be a specialty of his. His reason for being on this list, There He Lay, gives the viewer that same awe-inspiring first look at Smaug curled within his hoard the same instant as Bilbo, seen paused mid-sneak from around a corner. 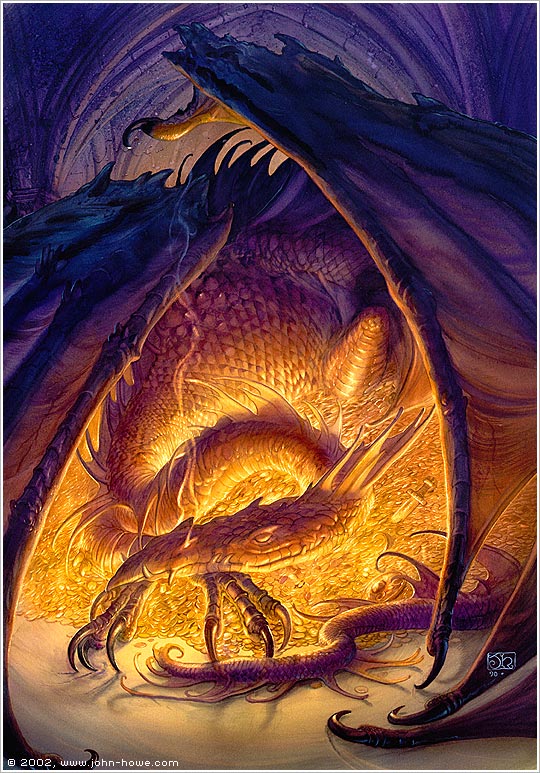 Smaug The Golden (in bronze)

When it came to John Howe’s work, I really couldn’t just pick one. While his aren’t my favorite interpretations of Smaug, they are definitely worth admiring regardless of your own tastes. Whether it’s his stunning portrait, Smaug The Golden, or the thrilling Smaug Destroys Lake Town, his talent and passion are obvious in his work. Smaug The Golden is his better known piece, as it has even crossed mediums and is also a lifelike bronze sculpture. Howe is the farthest thing from a stranger to Tolkien’s world, as well. In fact, he worked alongside Alan Lee and Peter Jackson during the conceptual stages of The Lord of the Rings, and his illustration of Smaug ravaging Lake Town appears in the 1988 Tolkien calendar.

Chances are if you’re a LotR fan, or have at least seen the movies, then you’ve seen Daniel Reeve at work! He is a freelance cartographer (read: guy who draws maps) from New Zealand (go figure), and so far, his most prominent work has been those lovely maps hanging all over Bilbo’s study. Not only that, but if you own the Lord of the Rings editions of Risk and Monopoly, you probably have some of his handiwork on your board games as well. And those amazing fonts that only the most hardcore of nerds download? Yup, chances are those are his as well. He is all over the Lord of the Rings’ merchandise, but clearly it’s for a good reason. His map-sized Smaug is about to become very well known and widely purchased. 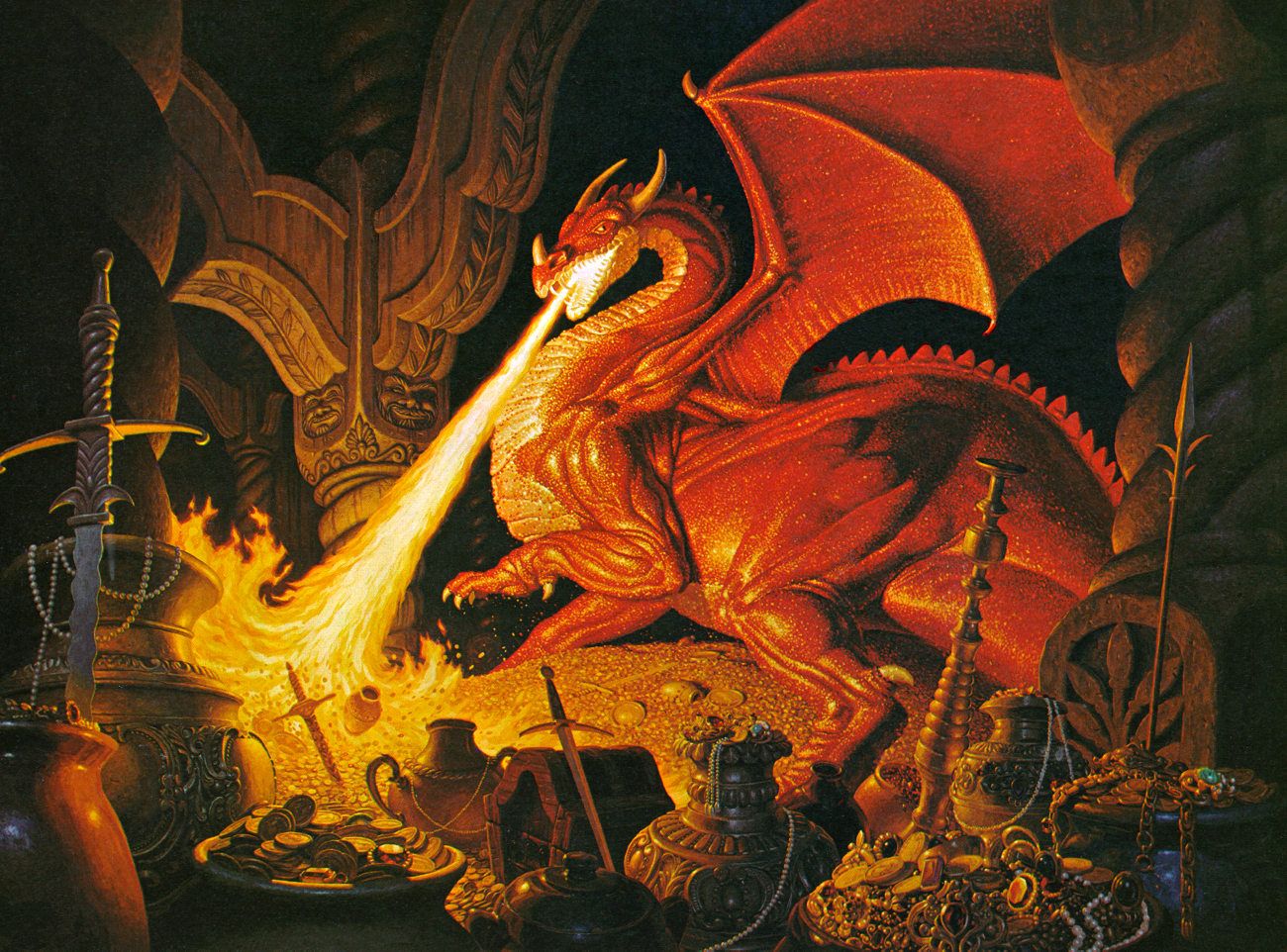 This always has been my favorite rendition of Smaug. It’s such a powerful representation of him. He is everything that he claims to be in this portrayal: “strong, strong, strong.” This is a dragon who doesn’t waste his time getting what he wants. Looking at this variation of Smaug, you can tell without a doubt that he will destroy everything in his path. Tom and Greg have done many other popular works, such as the first bilingual Star Wars movie poster, the artwork for the Trans-Siberian Orchestra in 2004, and their magnum opus Tim and Greg Hildebrandt, The Tolkien Years.

Michael Hague’s illustrations really are the stuff of fairy tales, considering that’s what most of his work centers around (beware, his website requires Internet Explorer – I don’t get it either). You can find him on copies of Peter Pan, The Wizard of Oz, and The Wind in the Willows. Oh, and The Hobbit, but you already knew that, right? His devilish Smaug glares through the 4th wall, ready to jump out of the picture and guard what he rightfully stole from the dwarves so long ago. If you can find the illustrated version, you can find other snapshots from The Hobbit which Hague has reimagined in his unique style. 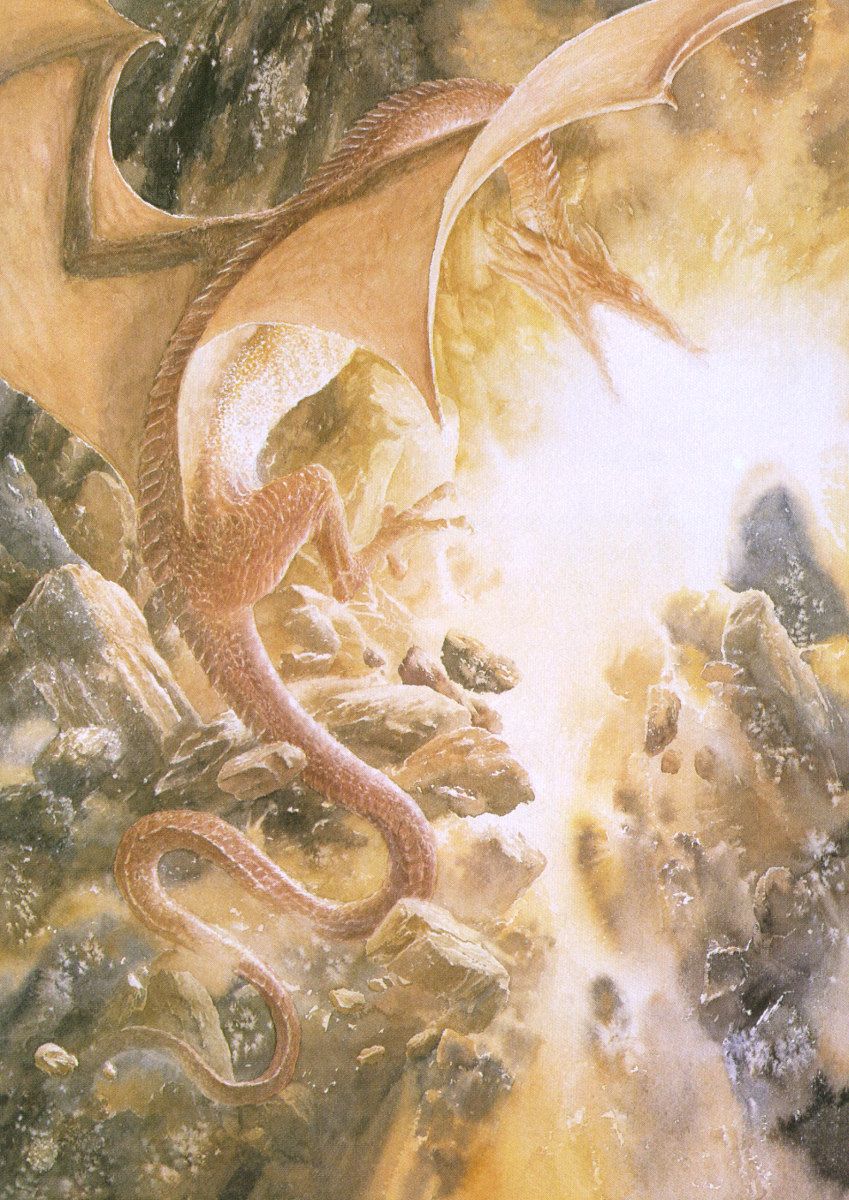 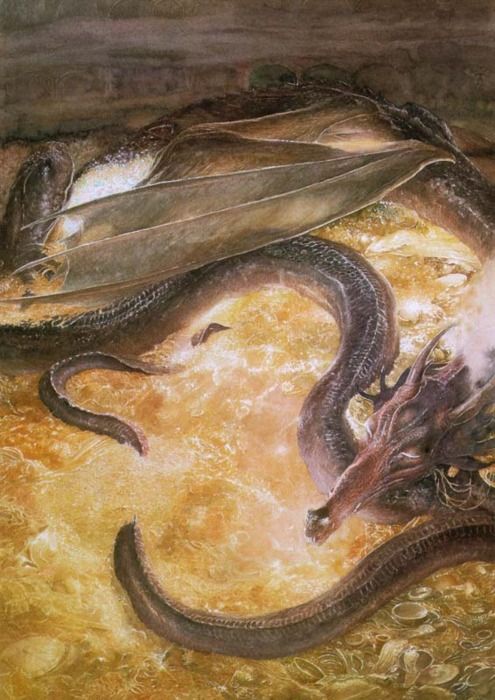 If there is one artist on here that you know of who isn’t Tolkien, it should be Alan Lee. If you have no idea who this man is, then shame on you! More likely than not, if you don’t know his work, you actually don’t know that you know, you know? In other words, Peter Jackson’s LotR is lousy with Lee’s art. Rivendell? All Lee. Minas Tirith? Lee. Fangorn Forest? Edoras? Bag End? Lousy lousy lousy, and I am crazy in love with it. While I don’t think that his Smaug work is his best (my personal favorite is The Stone Trolls), it is unmistakably Lee as the viewer looks through the heated haze at Smaug’s bat-like form wreaking havoc. 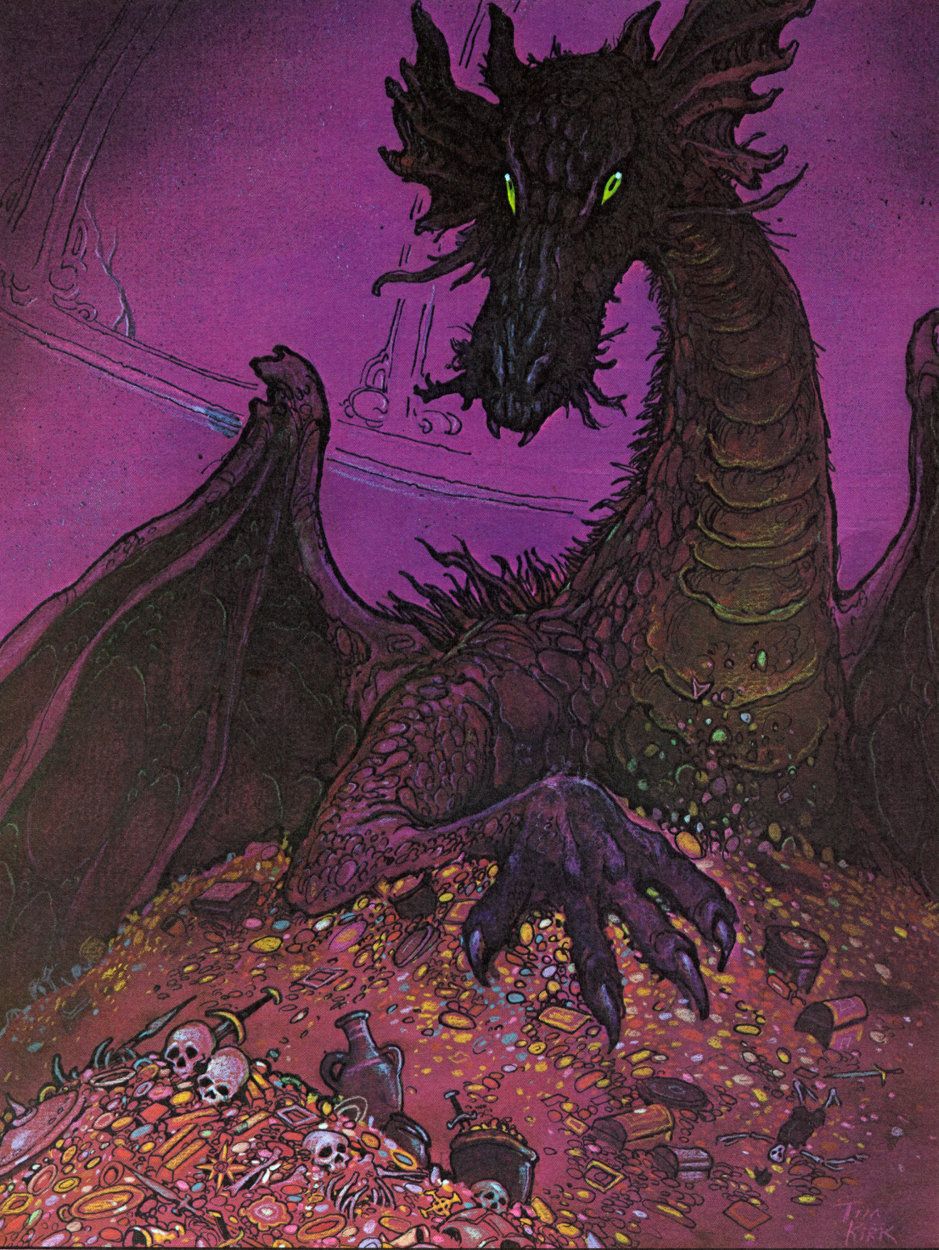 By some happy accident, the art that put Kirk on the map was his thesis project at California State University consisting of illustrations from The Lord of the Rings and The Hobbit. His portfolio was picked up by Ballantine Books for the 1975 Tolkien Calendar, and was used in the first non-Tolkien illustrated calendar. What was one of the pictures used? Why, his Smaug illustration, of course! Smaug, staring dead eyed at the viewer, one claw resting possessively over his hoard, is a wonderfully done illustration fit for a children’s book, with just enough chilliness. That might be more from the skulls in the forefront though, but hey, chilliness is chilliness, right? Oh, and if those aren’t bragging rights enough, Kirk was an Imagineer for Disney and is the senior designer at Tokyo DisneySea. I hope he wrote a nice thank you note to Tolkien. 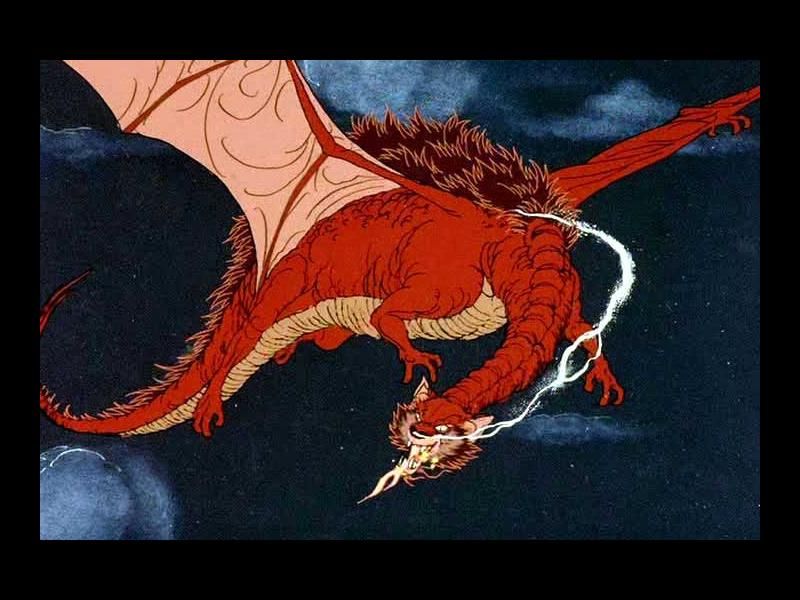 You’re familiar with the chimera from Greek mythology, right? Well, this is the Japanese version. Or just Japanese, if you think about it. Rankin/Bass Productions created the first movie of a Tolkien story when they created The Hobbit, and it actually was a pretty good movie. Smaug though, is the most bizarre representation of a dragon that I have ever seen, and always will be a very beloved rendition for me. Part bat, part cat, part… fire. I can’t count all of the sick days I spent watching this 1977 animated film on the couch, waiting with bated breath for Smaug and Bilbo to banter. Topcraft, the now non-existent Japanese animation studio, and Arthur Rankin seem to be the primary culprits for a creation I’m sure Tolkien couldn’t think up in his wildest dreams, or nightmares. However, since this was the first movie Smaug, you have to give him his credit for being one memorable monster.

Smaug Flies Round the Mountain Naturally, Tolkien has the number one spot for Smaug illustrations. He did the very first, on the first edition of The Hobbit, right on the cover of the book. An expert on all things Beowulf, Smaug was modeled after “old night-scather”, a cranky dragon with an unfathomable knowledge of his stolen treasures with a short temper. Tolkien also illustrated the scene where Bilbo, guarded by his magic ring, has his famous conversation with Smaug. While Bilbo is a hazy dark shadow, Smaug is long, lean, and glorious upon his golden couch. Tolkien’s Smaug is the one from which all other draw their inspiration, and sets the standards for any Smaugs to come.

*As a teaser, here’s what I could find of Smaug’s 2012 makeover for The Hobbit!