A big ego craves a lot of attention.  While egos exist in small forums, like a Youtube comment section or the seating area of a fast food restaurant, they often go unchecked and run rampant in the arts.  There needs not be a matching level of talent or accomplishment to warrant an ego, as most egos are never properly earned.  A fine example?  Any mainstream rapper.  Being an inner city poet laureate isn’t much of an accomplishment, and using sloppy rhyme schemes or phallic metaphors isn’t very artful.

Nonetheless, it seems to be enough of a skill to warrant critical praise from predominately lofty white music critics who view such talents as groundbreaking.  Mostly they just want to get on board the relevance express and follow the direction of the mainstream industry (i.e. downhill).  It’s no wonder that when a certain rapper comes along and varies the formula a little, and only lyrically, he is worshipped like an urban-outfitted god, and offered bloody sacrifices accordingly.  Kanye West is the man of subject here.  Upon arrival, he offered sensitivity alongside his ego and reeled in the accolades, words like “genius” and “concept album” being thrown around carelessly like a decapitated head in a game of Halloween volleyball.

While his words account for a tasteless, shallow fan base, no one takes note of the fact that his beats and hackneyed skyrocket-pitched-and-distinctly-oriental-sounding vocal dubs are nothing new within the Pro-tools-dependant music community; often times he simply and shamelessly steals, or samples rather, other people’s works entirely (e.g. Daft Punk, on two occasions).  Beyond lyrical content, thusly, he offers very little.  Which is why Kanye West is really no different from any frontman-turned-solo artist whose uncooperative ego becomes too big for his band of origin.  In fact, he relates particularly closely to UK’s most self-absorbed export, ex-Smiths frontman Morrissey.

Failing to see the connection?  Then take a look at these top 10 ways Kanye West and Morrissey are exactly the same:

(Warning: devoted Kanye fans and die-hard rap enthusiasts may find this list to be very unsettling, even blasphemous.  This is your last chance to stop reading if even a scintilla of musical criticism is able to completely ruin your day.)

He had the luxury of a posh, middle-class upbringing. Growing up without having to face the street-life hardships, and criminal records, that most within the genre are so vocal about, Kanye West has nothing intrinsically in common with most of his rapping peers and predecessors and certainly had no need for a hardened exterior.  His mom was an English professor, and he even spent a year at Chicago State University.  A privileged, functionally-literate background and highly-padded interpretation of the world enabled him the opportunity to whine about petty, matter-of-life grievances as well as describe the world from a non-persecuted lens.

In the Smiths song “Heaven Knows I’m Miserable Now,” Morrissey sings “I was looking for a job and then I found a job, and heaven knows I’m miserable now.”  If the fluttering melody weren’t so lush and distracting, you might even hear the silver spoon clacking against his teeth.

He only has his words, despite his voice.

If auto-tune indicates anything, it’s that Kanye can’t rely on his own vocal chords to carry a melody.  While Morrissey didn’t have the luxury of such technology, he never attempted to hide his lack of tonality; he was all the more endearing for it, as it was suitable enough of a bellow to deliver his meaning-rich words.  In either case, however, words are great on paper as literature, but are only that when the music suffers as much as the lyricist.

He offers little substance without a backing band. Like Morrissey without Johnny Marr and the rest of the Smiths’s added instrumental dynamics, you are listening to little more than Def Poetry Jam when all musical emphasis is given to rhythm and percussion.  The music should instill an effect separate from the words yet in a way that drives the power in their meaning home; the melodic content should add a heavier elbow to the lyrical stake placed immediately over the heart of the listener.  This is not accomplished when melody is absent or just not very contentious.

Morrissey has achieved a level of vanity to where he can rely on the recognizability of his surname, making “Steven Patrick” a redundant preface.  Even if he has a nameless backing band supplying the dank, drippy synth undercurrents to his furrowed eye-brows, it’s his name staining marquees and squatting over the album art.  Similarly, Kanye, though never on stage alone, takes 100% of the credit for his material, even if he does habitually samples other artists’ work and rely on preprogrammed loops.  Calling an album My Beautiful Dark Twisted Fantasy is a bit presumptuous, calling such a bombastically-named fantasy completely his.

He is frequently inconsiderate, the result of a boundless ego.

The product of ceaseless encouragement, Kanye, in his confused idea of how the world operates, has shown that he thinks that being an audience member is a participatory role, one that transcends simple applause and laughter.  As if award shows are interactive and openly invite show-stealing feedback, he voiced his dissatisfaction, mid-acceptance speech no less, for what he saw as an unconscionable decision.  While his argument did little to change the mind of the MTV decision-makers, it revealed a man who either thinks that kind of behavior is acceptable and that nothing he does has any consequences, or else a man who had a little too much to drink.  Morrissey has performed similar alienating acts, little surprise being one prone to frequent alienation:  in one reported instance, he abandoned an autograph session over a mild cheese sandwich craving, much to the dismay of a herd of devoted disciples who expressed their disappointment as passive-aggressively as possible.

He offers sensitivity in a genre typified by toughness and hard exteriors. An album like 808’s and Heartbreak reveals Kanye’s frequent feelings of shoe-gazing vulnerability, in spite of his self-defense mechanism of an ego, whereas an album title like Get Rich or Die Trying epitomizes rap’s do-or-die, often violence-prone mentality, what with the gun sound effects taking the place of a high-hat, or any proper form of percussion.  Morrissey had a more punk-oriented musical upbringing, and the Smiths are a definitive punk band, though Morrissey’s androgenous moans and sentimental nature is not typical of the kind of punk rock surrounding the Smiths or that which they grew up on.  Morrissey’s darling New York Dolls displayed crude sounds to match their attitudes, even if discontentment was a common undertone.  It’s the idea of appreciating an aesthetic from afar, though at the same time reflecting internal conflict.

He shops at the same glasses store. Buddy Holly’s trademark thick-framed glasses has seen itself appear on the faces of many dissonant artists, and plenty who feign to appreciate the past; while Morrissey truly was inspired by early rock and roll sounds (which includes those of “wall-of-sound”-wizard Phil Spector’s glittery girl groups) and was knowledgeable of a progressive and expansive musical timeline, Kanye sees about as far back as rap’s earliest days.  After all, rap is a very incestuous genre, constantly digging into and building off of itself.  Accordingly, he only sees the very superficial appeal of wearing such glasses (Jay-Z wears them), and sets no trends new and unused.  He samples eyewear like he does beats:  without a rightful prescription.  Call that ironic myopia.  Thanks to him, any given moron at a college party finds it okay to randomly accessorize themselves with a clear-lensed pair.

He wants to be perceived as an intellectual. 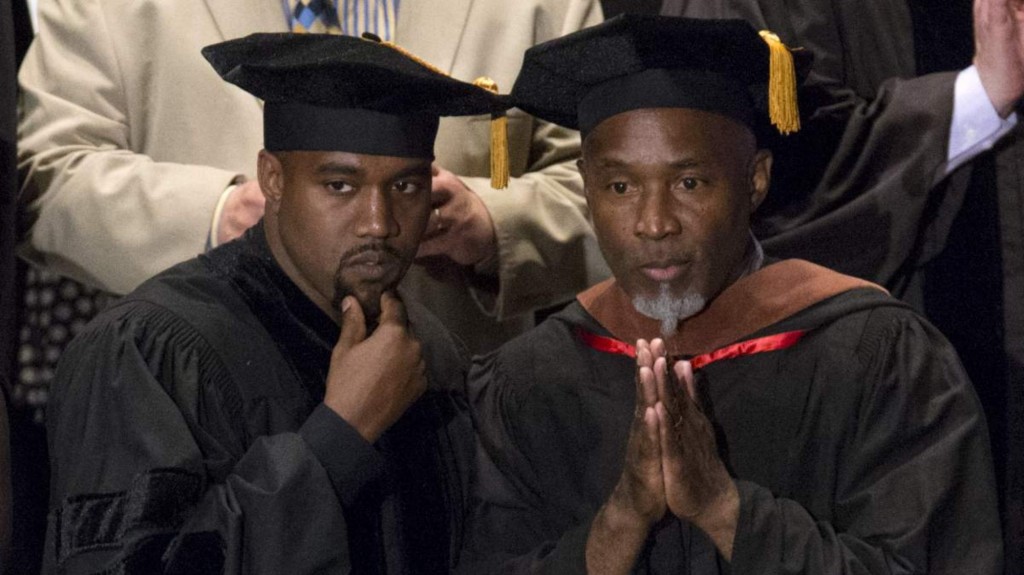 All it takes are big glasses, mildly introspective lyrics, and operatic rap pretensions to be considered a thoughtful genius.  There is hardly any brilliance in an entirely plastic art form, just a man proud of his Lego creation (even if it did come with a set of step-by-step instructions).  Morrissey at least supplied a level of depth with his ideas, supplying literary allusions on occasion, enough to where his intellect was validated by his substance.  Kanye’s lyrics are frequently steeped in the concept of fame and his cultural self-awareness.  To which you want to say, “Keep that to yourself man, and write about things bigger than yourself.”

He inspired the next wave of terrible saddoes. 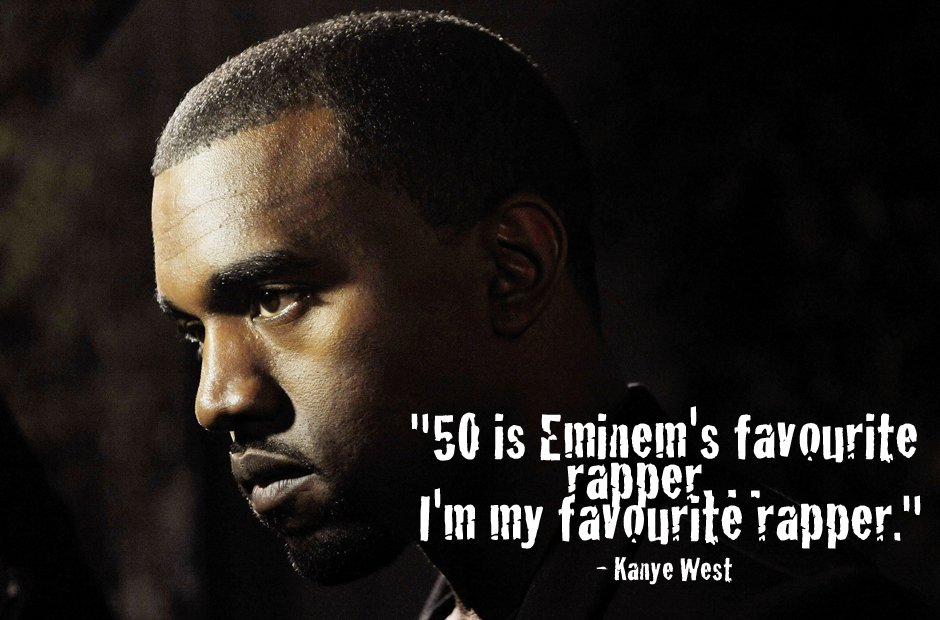 Saint Morrissey by ~ivyascending on deviantART

I suppose we have Morrissey to blame for a good part of the emo genre.  Those who appreciate him for his post-Smiths material are definitely prone to frequent superficial decisions (here we observe the lionization of the front man’s simple role: to carry the band’s image).  As such, all topical notions of depression, misery, and rejection follow suit, not to mention the appeal for uniform stylishness, slim fit tees, girl’s jeans, and side-swept hair being the common accoutrements.  Thusly it is no coincidence that you can only find a Morrissey tee-shirt at Hot Topic when you’d really prefer a Smiths one.  Kanye, to a lesser extent, opened the door to a new wave of “sad rappers” like Kid Cudi (who also wears the insta-genius glasses) and Drake, who both have found a way into the rap game in spite of being so utterly fortunate (Drake was formerly an actor on the Canadian preteen soap opera Degrassi).

He is a ubiquitous caricature, his image superseding whatever actually appears on a given album. 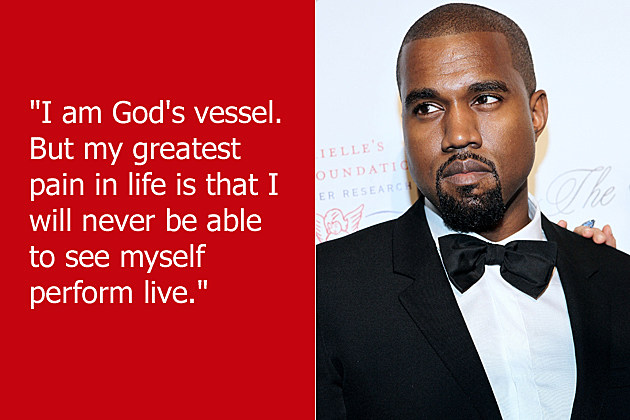 The name is immediately recognized across the board, even without ever having heard a single track; this is true of both.  Morrissey is the portrait of a pompadour-haired narcissist and jaded human being, one that enjoys flaunting ostentatious jewelry and chest hair.  And if you haven’t been exposed at dangerously toxic levels to a Kanye West song through a movie trailer, SNL performance, or mainstream radio station, you will find that going out and looking into any given album will unsurprisingly fail to meet all the shoveled out hype.  More like shovels of something else…  And I ain’t talkin bout no gold digga’.