Inspired by the beauty and uniqueness of the places I’ve visited this summer, I thought it would be interesting to write an article on some of the world’s strangest and most unusual landscapes. The Tessellated Pavement located in Tasmania, the Brazilian Valley of the Moon, Salar de Uyuni, Davolja Varos, the Giant’s Causeway and the following ten bizarre landscapes are proof that Mother Nature is anything but boring. What’s the most unusual landscape you have seen or visited?

More than 1,770 perfectly cone-shaped hills can be found in the Central Visayas region of the Philippines, more exactly in Bohol. Unfortunately, these amazing hills aren’t really made of chocolate, but they do look curious.  The hills look like a sea of chocolate kisses during the dry season. The unusual geological formation has baffled geologists for decades. There are different theories on how the conical hills formed.

Spread over an area of 50 square kilometers, the amazing hills are Philippines’s 3rd National Geological Monument together with Hundred Islands National Park and Taal Volcano, the world’s smallest active volcano.

Scattered along the beautiful Koekohe beach in New Zealand, these unusually large boulders attract tourists from all over the world. According to the Society for Sedimentary Geology, “the Moeraki boulders are large calcite concretions with septarian veins of calcite and rare late-stage quartz and ferrous dolomite”. What’s so special about the Moeraki Boulders is the fact that they formed on the sea bed approximately 65 million years ago, a period that coincides with the Cretaceous–Tertiary extinction event, now called the Cretaceous–Paleogene (or K–Pg) extinction event, a period of massive extinction of species, including dinosaurs.

It is estimated that Turkmenistan owns the world’s fifth largest reserves of natural gas. In May 2011, this was discovered in Turkmenistan – the second largest gas deposit, the South Yoloten gas field. It covers 1,500 square miles and is preceded by Iran’s South Pars gas field, the world’s largest.

The Darvaza Gas Crater, also known as Gates to Hell, is burning without interruption since 1971. It’s the year when some geologists who were digging in Darvaza for gas deposits, discovered a huge crater filled with poisonous gas and decided to light it on fire to burn off the excess and prevent local poisoning. Unfortunately, the deposit continues to burn to this day. Nobody knows for sure how much gas has been wasted and for how long it will continue to burn. Doesn’t this story remind you of the Centralia PA mine fire?

The enigmatic Pinnacles Desert is located in Australia’s Nambung National Park. Thousands of limestone pillars rise from the sands of the desert. The strange-looking limestone formations reach up to four meters in height.

Australia is famous for its unusual rock formations. Kata Tjuta (the Olgas), Ayers Rock – also known as Uluru, the world’s largest monolith – Devil’s Marbles, the Wilpena Pound in Flinders Ranges, Murphy’s Haystacks, the Twelve Apostles  and the incredible Wave Rock are some of the world’s most fascinating rock formations.

The Naigu Stone Forest and and the Suogeyi Village are protected UNESCO Sites since 2007. According to Unesco.org, the stone forests of Shilin, Yunnan Province “represent one of the world’s most spectacular examples of humid tropical to subtropical karst landscapes. The stone forests of Shilin are considered superlative natural phenomena and a world reference with a wider range of pinnacle shapes than other karst landscapes with pinnacles, and a higher diversity of shapes and changing colors.”

The main attraction of Turkey’s Cappadocia region is the Göreme National Park located in the Göreme Valley. Entirely sculpted by erosion, this spectacular landscape hides a wonderful historical heritage. Part of the national park includes rock-hewn sanctuaries that contain unique evidence of Byzantine art from the post-Iconoclastic era, ancient underground cave dwellings and troglodyte villages. There have been discoveries of the remains of a human habitat estimated to date back to the 4th century.

According to geologists, the eroded plateau of the Turkish valley is an extraordinary example “of the effects of differential erosion of the volcanic tuff sediments by wind and water.” Unesco.org 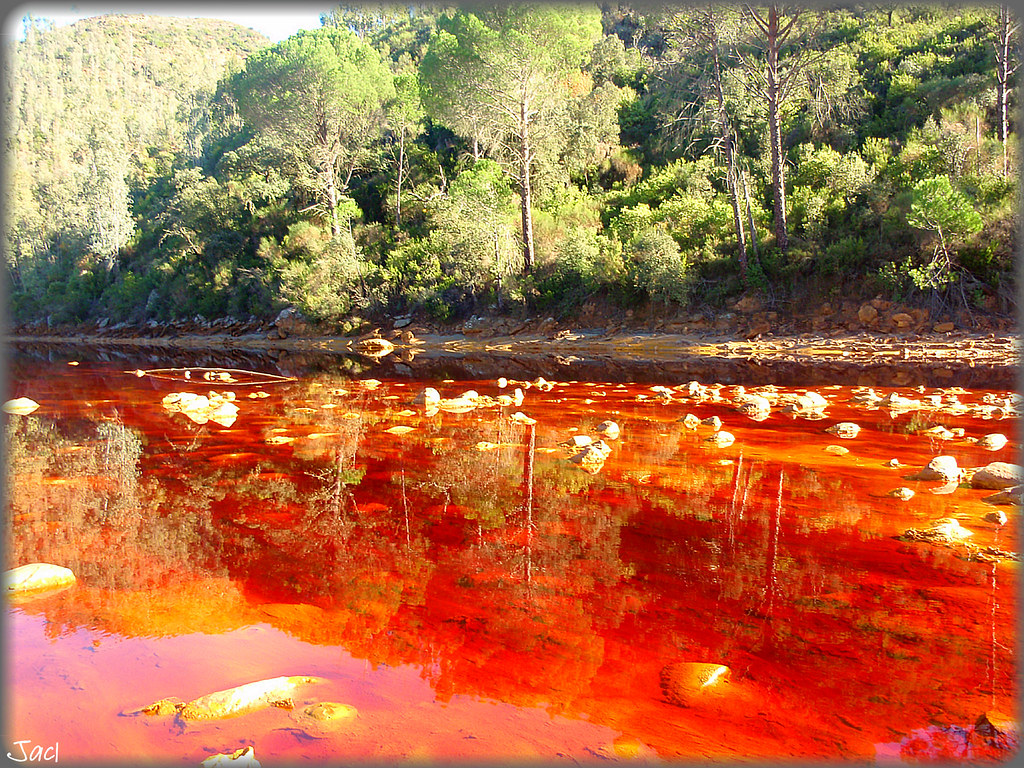 The 58-mile-long Spanish river flows from the mountains of Sierra Morena to the Gulf of Cadiz through one of the earth’s largest deposits of pyrite. The rather otherworldly landscape is the result of at least 5,000 years of mining activity. With a low pH and high concentration of heavy metals, scientists claim that the Rio Tinto fluvial-estuarine system is one of the planet’s most polluted rivers.

Rio Tinto played a key role in history. It is the birthplace of the Bronze Age and Copper Age.

The number three spot goes to the hottest inhabited place on earth. If the average year-round temperature in Ethiopia is 94 degrees Fahrenheit, the temperature regularly exceeds 115 degrees in the Danakil Depression, where the Dallol volcano is located.

I envy all of you who had the chance to visit this corner of paradise. Blessed with unusual but splendid rock formations, Arizona seems to be the home of natural wonders. The Grand Canyon, the Petrified Forest and the Wave are some of the world’s most visited and photographed places.

The Antelope Canyon is split into the Upper Antelope Canyon (Tse’ bighanilini) & the Lower Antelope Canyon (Hasdestwazi). The meaning of their Navajo names translates into “the place where water runs through rocks, respectively “spiral rock arches”. The lower section is deeper, longer and more challenging than the upper one. 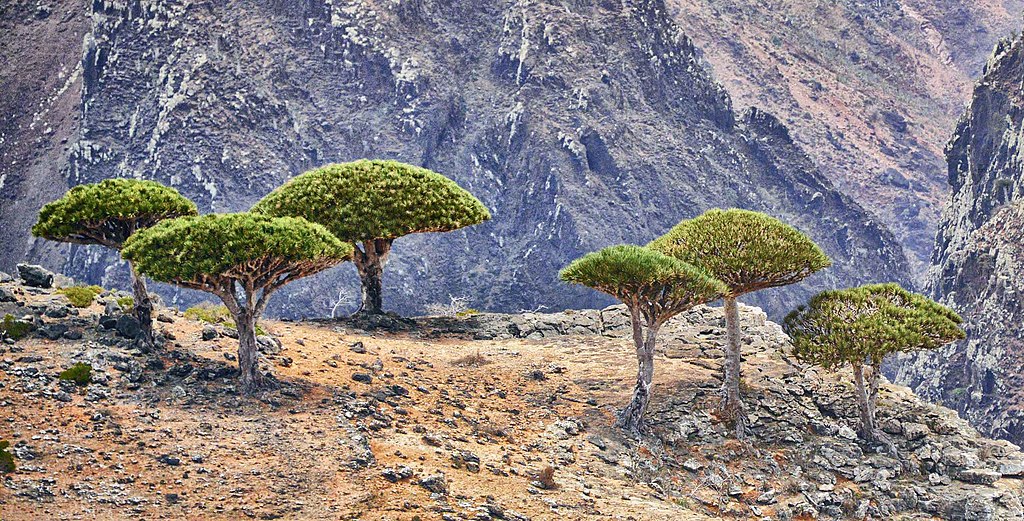 You have not been transported to another planet. It’s the number one on the list; the most unusual landscape I’ve ever seen.

There is a small archipelago in the Indian Ocean that has been described as the world’s most alien-looking place. The Socotra Archipelago consists of four islands and two rocky islets of universal importance. Unesco.org claims that “37% of Socotra’s 825 plant species, 90% of its reptile species and 95% of its land snail species do not occur anywhere else in the world. As one of the most biodiversity rich and distinct islands in the world, has been termed the “Galápagos of the Indian Ocean”.

The Yemeni island is home to some fascinating species of flora, such as the Dragon’s Blood Tree (Dracaena Cinnabari), the Desert Rose (Adenium Obesium), Cucumber Tree (Dendrosicyos Socotranum), Dorstenia Gigas and many more. Aren’t these some of the weirdest looking plants you’ve ever laid eyes on?