People have been building statues since time immemorial. The Colossus at Rhodes, the Statue of Liberty– throughout the ages, we’ve been driven to build gigantic monuments to ourselves, and many of these have become iconic symbols of humankind’s artistry.

Then, there are these. For your careful consideration and endless bewilderment, here are a selection of statues from around the world that we can’t for the life of us figure out the thought process behind. 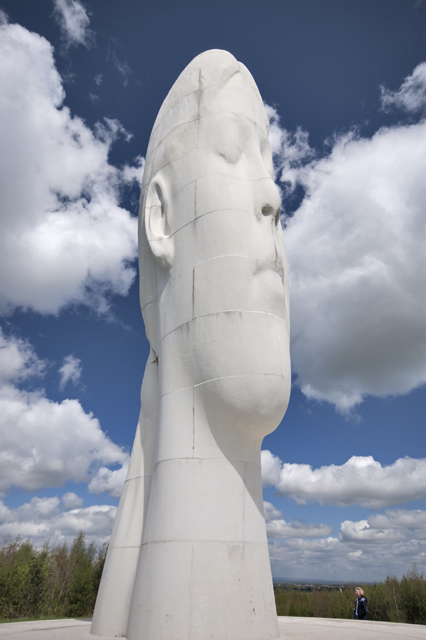 Spanish artist Jaume Plensa designed and built this 65-foot high disembodied head that graces the English countryside outside St. Helens, traditionally a mining community. The head has its eyes closed, so yes, it is conceivably dreaming.

The piece was commissioned by the St. Helens City Council to “reflect the aspirations of the local community,” which has nothing to do with mining and everything to do with, huge, white, creepy heads.

Well now, this just seems unnecessarily horrible. This 16th-century piece is called “Kindlifresserbrunnen” (“Child Eater Fountain”) and is located in Bern, Switzerland. It is exactly as advertised – it appears to be stuffing a baby into its mouth, and is in possession of a sack containing three more for the road.

Popular consensus is that it’s just an old carnival sculpture meant to frighten kids, but that’s perhaps the most disturbing thing about this piece: nobody knows just who built it, or why.

8. Hand Of The Desert, Atacama, Chile

Chilean sculptor Mario Irarrázabal designed this three-story high giant hand, we hope; otherwise, it might belong to a stone giant that is ever-so-slowly clawing its way through the surface of the Atacama desert.

Apparently, Mr. Irarrázabal is a fan of giant hands rising from the desert, as he has built two similar sculptures in the US and Uruguay, though they are not as impressive in scale. But then, few giant stone hands are.

Belgian artist Jan Febre unveiled this piece in 2005, commemorating the 575th anniversary of the Catholic University at Leuven, Belgium. Dubbed “Totem” for some reason, it depicts a gigantic upside-down beetle impaled on a 75-foot needle, outside the University library.

This is supposed to represent the spirit of the city and the University somehow. We’re not art critics, so we’re not going to argue. but to us, it just looks like a serious warning to beetles for miles around.

6. Ozymandias On The Plains, Texas, US 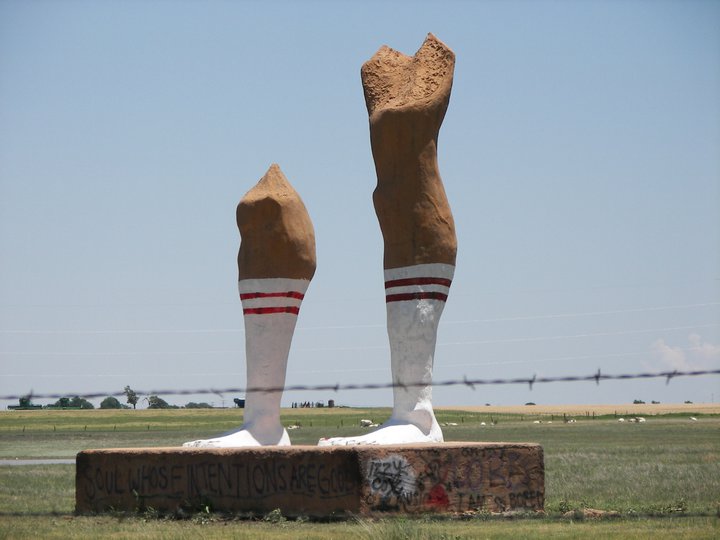 Eccentric millionaire Stanley Marsh 3 (not III; he dislikes Roman numerals,) has no relation to the South Park character … we think. He commissioned this piece, which was completed in 1997 by artist Lightnin’ McDuff. It’s somewhat ironically named after a Percy Bysshe Shelley poem about the futility of building monuments.

The plaque explains that Shelley wrote the poem on that spot, after coming across those very ruins, which of course is ridiculous since the sculpture is less than twenty years old. The gym socks were painted on by pranksters, but Marsh liked it so much he took credit for it.

5. Maman, Ottawa, Ontario (and other places)

Louise Bourgeois, a French-American artist and sculptor, produced this sculpture that many of you are just not even going to be able to look at. Its title is informal French for “mother,” and it is a 30-foot bronze spider with a sac containing 26 “eggs” made of marble. It was unveiled at Tate Museum Of Modern Art in the UK in 1999.

Said the artist: “The Spider is an ode to my mother. She was my best friend. Like a spider, my mother was a weaver. My family was in the business of tapestry restoration, and my mother was in charge of the workshop. Like spiders, my mother was very clever. Spiders are friendly presences that eat mosquitoes. We know that mosquitoes spread diseases and are therefore unwanted. So, spiders are helpful and protective, just like my mother.”

Please let us know in the comments if you agree that spiders are “friendly presences” or, conversely, if you now have a 30-foot high case of the willies.

Mazinger Z is a famous series of Manga- a pioneering one, beginning in 1972. It was influential on the development of Manga as a whole, on other properties like the Transformers and Power Rangers (not to mention countless other “giant mecha” books, movies and TV shows) and also seems to have made quite an impression on a small suburb of Catalonia, Spain.

The Mas Del Plata suburb was never actually finished, as funding dried up before it was complete. We have to wonder if this 40-foot tall statue of a famous Japanese robot had anything to do with that. The giant fiberglass Mazinger eternally guards the entrance to the suburb that never was, and has become a pilgrimage for Manga and anime fans.

The Tarasque is a creature of legend, a sort of bear-dragon-turtle thing that supposedly terrorized the village of Tarascon centuries ago. According to the stories, the beast was tamed by St. Martha and brought back to the village, only to be killed by the villagers. We cannot say that we blame them.

Sorry for their understandable knee-jerk reaction to the terrifying beast, the villagers named their town after it, which it retains to this day. Artist Pascal Demaumont completed this statue in 2005, which is the centerpiece of a yearly festival in honor of the town’s namesake. 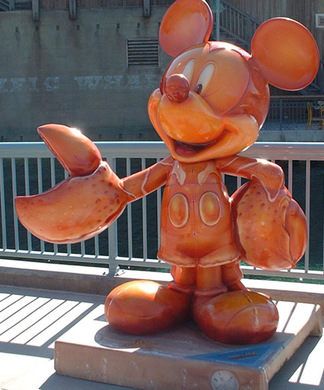 Artist Breanna Rowlette created … this, as part a Disney-sponsored project involving 75 700-pound Mickey Mouse statues getting tricked out by various artists to reflect different regions of the U.S. (cleverly titled “75 InspEARations”). Being from Boston, and since apparently nobody associates that city with anything but lobsters, Breanna decided the only sensible thing to do was to slap lobster claws on Mickey Mouse and call it a day.

The six-foot, anthropomorphized crustacean/rodent hybrid sits in Faneuil Hall marketplace in Boston, confusing the hell out of all who cross its path.

And speaking of hybrids, this is called “Posankka,” but just look at it. It’s either a pig-duck or a duck-pig, we’re not sure which. This insanity was created by artist Alvar Gullichsen in 1999, and was floated down the Aurajoki river. It’s been at its current location near the University of Turku since 2001.

According to the artist, it’s meant to be a criticism of modern gene-splicing technology, which actually sort of makes sense. Many residents are not too fond of the statue, probably because when you see one of the craziest things on the planet every day, life starts to lose its ability to surprise you.

Previous ArticleBruce Lee Literally Punched Too Fast To Block
Next Article You Can Rent Liechtenstein, No Really, You Can