When searching for the top 10 famous cartoon dogs you have to consider notoriety, popularity, cultural significance and, of course, cuteness. Is it the kind of dog that you would happily max out your credit card for on silly toys, delectable treats, plush beds and bling collars? Oh, and if you could talk, it probably helped. There are any number of famous dogs in entertainment: Lassie, Eddie (of Frasier fame), Benji, Hooch, and Rin Tin Tin, but there is a certain breed of dog that has risen to a celebrity all their own. The animated dog. Here are the top 10 most famous animated dogs. And don’t worry, they are all house-trained.

A staple of Nickelodeon for many years, Ren was the often abrasive, usually neurotic companion of the slightly effeminate, hair-ball producing Stimpy. A take on a Chihuahua, Ren could go from screaming and calling Stimpy an idiot, to shivering in a corner much like a real Chihuahua. An icon for an entire generation of teenagers, Ren leads off our list at number ten.

Children around the world are familiar with Blue for her educational messages and great source of early childhood development skills.The recipient of nine Emmy awards, Blue’s Clues was inspired by Sesame Street, and appealed to the same crowd of pre-schoolers. Incorporating sign language, creative thinking, riddles, and both verbal and non-verbal skills, Blue’s Clues remains a great source for children of all ages.

Often neglected, the Simpson’s dog, Santa’s Little Helper, is a charming, but poorly trained Greyhound.Having survived where the family’s cat has not (currently on Snowball V), this retired racing Greyhound

has been a staple of the Simpson household for years.Having saved members of the family on numerous occasions, it’s often surprising that Bart was so quick to replace him with the more well trained Laddie (a joke on Lassie). Eventually Bart came to his senses, and Santa’s Little Helper has stayed with the Simpsons ever since. 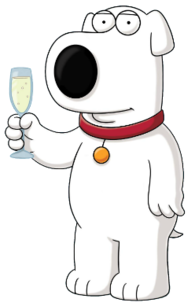 The Griffin’s dog is noticeable for his wit, intelligence, love of martinis, and ability to speak.While only 7 years old, Brian is only a few credits short of a degree from Brown University, owns a car, votes, and maintains a credit card.While displaying some of the typical canine behaviors (fear of vacuums), Brian’s anthropomorphic qualities are what have made him one of the more memorable animated dogs in recent history, catapulting him from tertiary character to one of the most popular characters in the series.

While certainly not the main star of the series, Odie has been a participant (sometimes willing, sometimes not), in many of Garfield’s hi-jinks.Though Garfield has usually gotten the better of Odie’s good nature and admitted simple nature, Odie has shown surprising ingenuity in getting revenge on Garfield on a number of occasions.

The first couple of animated dogs, Lady and the Tramp showed us that even dogs need love and companionship from their own kind.When not pushing meatballs with their noses and eating spaghetti, Lady and the Tramp fell in love and eventually had a litter of their own (spearheaded by the aptly named Scamp). While not the last animated dogs to be presented to us by Disney, they are the ones that stick out the most in the minds of most dog lovers the world over.

Usually portrayed as Mickey Mouse’s pet dog, Pluto represents the ideal of man’s best friend that we all think of when looking for our own dogs.Pluto is the pinnacle of the animated man’s best friend – even if that man happens to be a mouse.

Underdog always spoke in rhymes. Normally, he spent his time as “Shoe Shine Boy”, and was just that. But when he took one of his super power pills, he transformed into Underdog and saved his love interest, news reporter Sweet Polly Purebred. His nemesis was usually Simon Bar Sinister (voiced by Allen Swift, who is a true living legend of animation voice-overs).

The storylines were always pretty much the same, but there was usually a lesson to be learned at some point in the show.

The eternal partner of Shaggy, Scooby-Doo has been solving crimes with his friends since 1969.When not being bribed with Scooby Snacks, Scooby and Shaggy could be found running in terror from what always ended up being somebody in a costume scaring the locals.

While Scooby’s mystery-solving prowess can be debated at some other juncture, his pop-culture status is undeniable with treats bearing his image are available for both people and dogs.

When it comes to animated dogs, nobody is more iconic than Snoopy. The dog of Charlie Brown, Snoopy and his friends have been a part of our lives since 1950.When not working as a mascot for MetLife and for Aerospace Safety, Snoopy and the Peanuts gang managed to appear in numerous comic strips and in some of the most iconic cartoons ever created (what would a Halloween be without It’s the Great Pumpkin, Charlie Brown or a Christmas without A Charlie Brown Christmas?), many of which are still enjoyed to this day by a new generation of children.

While there hasn’t been a new Peanuts since 2000 (the last one was published on February 13, 2000 – the day after Peanuts creator Charles M. Schulz died), Snoopy, Charlie Brown, and all the Peanuts characters are as relevant today as they were more than 50 years ago.