If one were able to stop Hitler and his rise to power, millions of lives could have been saved and just about all of World War II could have been prevented. There were multiple incidents throughout Hitler’s life that could have ended his reign, oftentimes before it even started, but Hitler’s unpredictability, paranoia, and plain old dumb luck allowed him to live and stay in power until he took his own life on April 30, 1945. 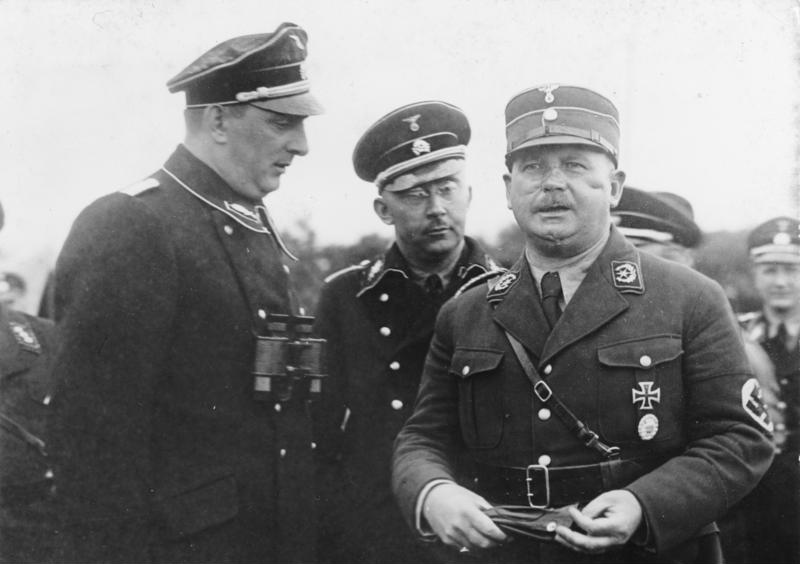 Ernst Julius Röhm was a founding member of the Nazi party and one of its most dogmatic leaders.  He founded and ran the Nazi Storm Troopers, or SA — the muscle behind the Nazi political machine. However, members of the Nazi party and German elite started to get nervous about Röhm’s growing power and calls for revolution. Hitler, anxious about anyone moving in on his one-man show, decided to eliminate Rohm and his Storm Troopers. He personally flew to Wiessee, Germany, and went unescorted to Roehm’s chalet.  He ran into Röhm’s house, past his staff, and right into his bedroom. No one knows what was said between the two, but Röhm soon emerged and ordered his staff to stand down, as he was surrendering to Hitler.

As he was leaving the Chalet, a whole column of SA Storm Troopers rolled up in trucks to take Röhm to a SA meeting. With their commander in the back of his car, Hitler calmly told them to return to their homes. If Hitler arrived just an hour later, the Troopers would have already been at Röhm’s house, and the commander wouldn’t have been so vulnerable. Instead of being arrested, he could have arrested Hitler. As it was, Röhm was killed and most of the Storm Troopers either followed him to the grave or were absorbed into the SS. In a year-long plan, Johann Georg Elser plotted to kill Hitler at the Bürgerbräukeller, the site of Hitler’s failed 1923 Beer Hall Putsh coup. During this year, Elser slowly collected explosives and spent his nights hidden in the Bürgerbräukeller, painstakingly carving out a hollow space in a wooden pillar next to the speaking podium. Finally, he was able to make a space big enough to fit the explosives he had collected.

On the night of Hitler’s speech, he set the device in place and planned for it to go off at 9:20, which would have been during one of Hitler’s infamously long speeches. Weather intervened however, when foggy weather cancelled flights out of the city; Hitler shortened his speech so that he could catch the train. He left the podium at 9:07, just 13 minutes before Elser’s bomb detonated. The explosion was so big it killed 8 people and injured dozens more. It almost certainly would have killed Hitler too, if only he hadn’t cut his speech short to make the train. Initially, Henning von Tresckow was a supporter of the Nazis. However, after they betrayed the SA and started persecuting Germans, Tresckow started looking for ways to end Hitler’s reign. Collecting a number of like-minded Germans, he started planning Operation Spark, which sought the overthrow of the Nazi leadership. The Operation planned to kill Hitler then Tresckow’s officers would seize control of German command positions and take power in the Third Reich.

One plot Treschow cooked up involved a bomb disguised as a case of alcohol. Treschow convinced an aide of Hitler’s that he had lost a bet and needed the aide to deliver the “bottles” as the prize to the winner, Colonel Helmuth Stieff. The package was safely stowed away on the plane and, with Hitler on board, the plane took off to Berlin. Unfortunately, the bomb fuse failed during the flight. After Hitler’s plane landed safely in Berlin, the coup was called off. If plotters had just somehow packed the bomb a little more carefully so the fuse didn’t fail, Hitler would have exploded in the air somewhere over Eastern Europe. Not dissuaded by the failed plane plot, Henning von Tresckow tried again. This time, he recruited Rudolf Christoph Freiherr von Gersdorff, who volunteered to become a suicide bomber who would take out Hitler. On March 21, 1943, Hitler was to attend an exhibition of seized Soviet arms at a German war museum.  As an arms expert, Gersdorff was to be his guide around the exhibit. When Hitler arrived, Gersdorff activated two bombs and placed them in his pocket.  They were to go off 10 minutes later, while Hitler was taking the tour.

For some reason though, Hitler rushed through the exhibit in just a few minutes and then quickly left the building. Gersdorff  was able to excuse himself, and quietly deactivated the bomb with seconds to spare. If, instead of a timed bomb, the conspirators had used an activated bomb or grenade, Hitler probably would have been killed and a military coup could have taken place. In 1929, a dissatisfied SS guard plotted to kill Hitler during a speech in what was then the biggest hall in Berlin, the Sportpalast. The plan was to activate the bomb during Hitler’s speech. Knowing his speeches lasted for hours, the guard excused himself to go to the bathroom to prepare himself for the task. It was here that cruel fate stepped in. As the guard was trying to exit the bathroom, he found the door was stuck, and he was locked in. For the remainder of the speech, the guard that could have changed world history was locked in a bathroom, his chance to kill Hitler foiled by a faulty door knob. After World War I, Hitler had no training or higher education, and was left with very little job prospects outside of the Army. Attempting to stay employed with the German military for as long as possible, he was assigned to be a Verbindungsmann (intelligence agent) of an Aufklärungskommando (reconnaissance commando) of the German military. It was here that his commander assigned him to spy and report on the many groups that threatened the German state.

The group his commander choose for him to infiltrate was DAP, the precursor of the Nazis. Its founder, Anton Drexler, quickly won over and converted Hitler to his cause. Its anti-Jewish and anti-communist ideals inspired Hitler, who not only started working for DAP, but eventually took it over. If Hitler had been assigned to infiltrate another group, he might well have stayed working in the German Army’s intelligence wing, or he might have joined another party, one that might not have been successful. Made famous by the Tom Cruise movie Valkyrie, Operation Valkyrie was a plan by hundreds of Germans to first kill Hitler, and then seize control of Germany. Claus von Stauffenberg was tasked to deliver a bomb to the bunker Hitler was supposed to have a meeting in, on July 20, 1940. Since it was a hot summer day, the meeting was moved from the bunker to a wood cabin. Stauffenberg was able to arm the device and place it near where Hitler was standing, but unfortunately the bomb was moved further away from Hitler by another aide. When it went off, the large oak table and weak walls of the wood cabin dampened the blast.  If the meeting had taken place inside the bunker, there would have been no way Hitler would have survived. Axel Freiherr von dem Bussche-Streithorst was a German nobleman who was fed up of war and wanted Hitler dead. Motivated by Count Claus Stauffenberg, he decided to carry out a suicide bombing that would kill Hitler in the process. Bussche managed to wrangle up a role as a male model, one that would display the new fall line of Nazi uniforms. His plan was to stuff as many explosives down his pants and then, when Hitler walked by, Bussche would hug him and detonate his deadly package.

But the British, unaware of the plan, bombed the train that was transporting Bussche’s soon-to-be exploding pants. If only the British either missed the train, or somehow knew of the plan, Bussche would have succeeded in hugging Hitler to death. During World War I, Hitler was a Corporal in the German army. On September 28, 1918, while part of the 16th Bavarian Reserve Regiment, he was wounded in battle, and attempted to flee the battlefield. British private Henry Tandey spotted Hitler and actually had him in his sights, but didn’t shoot. Hitler was wounded and Tandey just couldn’t bring himself shoot an unarmed, wounded man.

He didn’t find out until about 20 years later, when Hitler was in full-fledged monster mode, that he had given up the chance to kill the man due to battlefield ethics. Though racked with guilt the rest of his life, there was no way for Tandey to have known at the time. After all, for most of his life, Hitler was just another guy. In the run-up to World War II, Hitler started to eat up the countries around Germany, starting with Austria. Hitler thought he would have no problem with swallowing up his old homeland and uniting two German-speaking nations. His army, however, had other ideas, ones based on reality, since the German army was still crippled by the restrictions of the Treaty of Versailles. These restrictions were no more evident than when German tanks broke down after only moving a few kilometres, and the advancing columns dissolved into total chaos. If the Austrian President hadn’t told his Army Army to stand down, the Germans might have been repulsed.

When Hitler set his eyes on Czechoslovakia, his army again had reasons to be concerned.  They were doubtful they could take on the Czechs and their heavily-fortified Sudetenland. The German high command remembered the difficulties during the Austrian “invasion,” and knew that if it meant war with Czechoslovakia and France, they would at least put up a struggle. Even worse, Russia might very well have barreled through Poland to attack the Fascists.

In order to prevent war (and Germany’s destruction), Hitler’s chief of staff, General Franz Halder, planned to stage a coup and remove Hitler from power. At the chosen time, the Berlin head of police was to arrest the entire Nazi leadership, including Hitler, Himmler, Goering, and Goebbels. The plan was to strike at September 14 at 8:00 PM, but on that day, it was announced that the English Prime Minister, Neville Chamberlain, would be flying to Berlin to have a meeting with Der Fuhrer. Halder delayed the coup on the small chance Hitler could bluff Chamberlain into backing down and giving him the Sudetenland.

Surprising nearly everyone, Chamberlain gave into everything Hitler asked for, and Halder called off the coup, now confident of Hitler’s abilities as a leader. The myth of Hitler as a man who could do anything was officially born.

Eric Yosomono writes for Gaijinass.com, you should check it out!