Outside of being turned into a dog toy or Jell-O, bones don’t seem very useful outside the body. However, bones were much more useful historically. Before the invention of plastics, bones were a common material for tools and objects. Even now, bones may be mixed with their modern counterparts in products.

So next time you hold the bone of a drumstick, you may want to keep the following alternate uses in mind. Bones can be used to make flutes. For this use, bird bones are especially popular, as they are naturally hollow. Two Stone Age German caves, Geissenklösterle and Hohle Fels, have yielded such bone flute artifacts. Flute fragments found at Geissenklösterle date to around 35,000 years ago, while the Hohle Fels flute date to about 4,000 years ago. The Hohle Fels flute was made from the naturally hollow wing bone of a griffon vulture, while 30,000-year-old flutes, found in Isturitz, France, were made from swan wing bones. 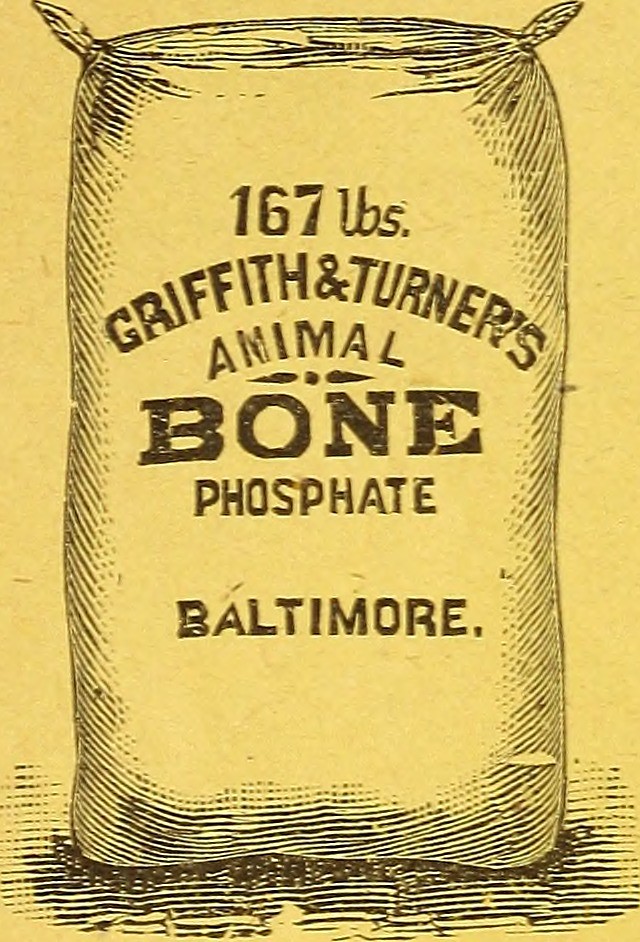 Bone meal was first widely used as a fertilizer in the mid-nineteenth century. In places such as Abilene, Texas, buffalo bones were collected and used for fertilizer. Before 1900, the buffalo bone industry was supplanted by cattle bones.

Today, the bones of cows, as well as pigs and sheep, are most commonly used for bone meal. Bone meal is ground into two types: a coarse grind and a fine grind. Finer grinds release nutrients into the soil faster. As bone meal is rich in calcium and phosphorus, but deficient in nitrogen, gardeners may add nitrogen-rich manure to balance the application. 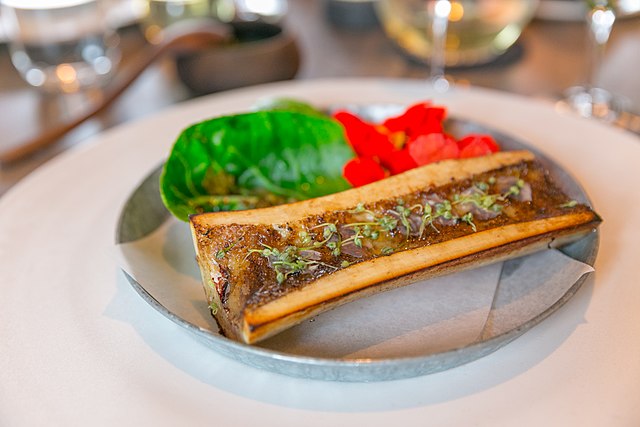 Gelatin aside, the hard part of a bone isn’t edible; however, the soft, fatty inner part of the bone, called marrow, is. Several countries, among them India, Iran, and Hungary, have dishes featuring bone marrow. It is comparable to butter in consistency and application, and may even be called “meat butter” or “prairie butter.” Marrow was once so prized in Europe that diners used specialized tools to extract the marrow from bones. 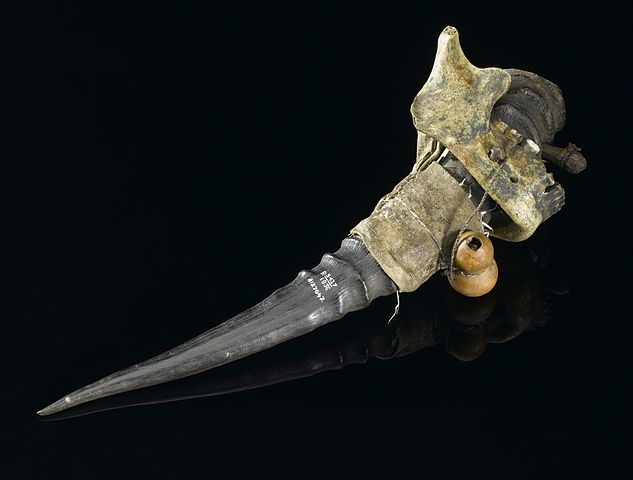 Bones can be used as a weapon in the wilderness. Knives can be made from the splinters of a deer’s smashed leg bone. The applications of such a knife are limited; it is best suited for puncturing.

The Clovis people of prehistoric North America made fluted, sharpened projectiles out of wood or bone. One has been found embedded in the rib of a male mastodon. No evidence of bone growth has been found around the Clovis point, which suggests that the mastodon died shortly after the attack. The Apaches also made clubs from the jawbone of a horse, elk, buffalo or bear. The teeth were left in the jaw, and sometimes even polished for aesthetic appeal.

On a Biblical note, Samson (a sort of Hercules of the Abrahamic religions) is said to have killed one thousand men with the jawbone of a donkey. Visitors look at a dinosaur leg bone on display in Zhengzhou, in China’s central Henan Province, on Tuesday. Parts of the 18-meter dinosaur were dug up and eaten by locals as traditional medicine, scientists said. EyePress via AP

Fossils were unearthed in China long before fossils’ significance as the remains of prehistoric animals was known. Called “dragon bones,” they were ground and consumed as treatment for a variety of ailments, such as dizziness, leg cramps, dysentery, internal swellings, and malaria. While the destructive practice is a frustrating phenomenon for paleontologists, the locals’ knowledge of fossil troves proves valuable for excavation. 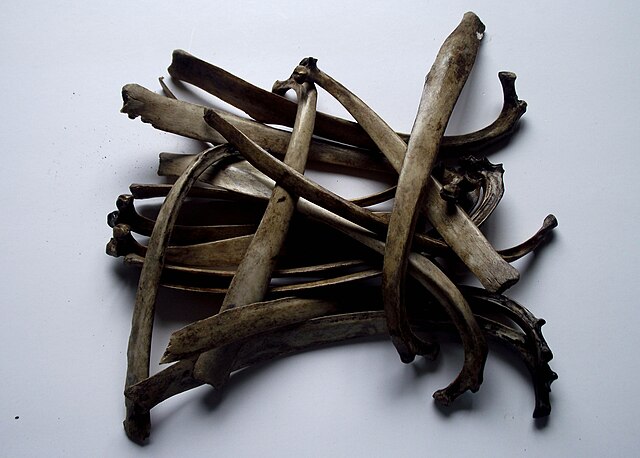 Pieces of bones, whether from turtle plastrons or the scapulae of oxen or water buffalo, were used to divine the future in ancient China. After the bones or shells were cleaned of flesh scraps, the material was sawed, smoothed and polished to create flat surfaces. Orderly rows of pits, which varied in number, were drilled or chiseled partway in. A heat source would then be applied to the pits until the bone cracked. The cracks in the oracle bone were read to determine the answer, but how the answer was determined is not known.

While the term “oracle bones” is only applied to scapulae or shells used in China, the practice of using scapulae to divine the future exists elsewhere. Specifically, scapulimancy has been practiced in Japan, Korea, Europe, Africa and North America. The practice exists even today, among Greek and Serbian farmers. 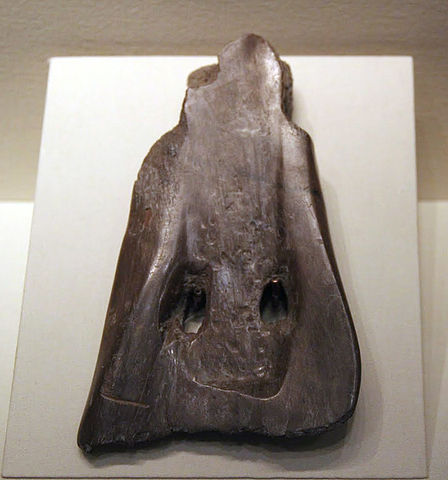 Several cultures created shovels from mammal bones. These shovels were most often shoulder blades, or scapulae. The shoulder and pelvic bones of large animals were used by the Cherokee to make shovels. Deer ligaments or leather straps attached the bones to wooden sticks three to four feet in length. Prehistoric people also made shovels. Their shovels were made from the complete shoulder blades of a pig, ox or deer, in addition to its antler handle. In China, bone shovels could be made from pig scapulae or ox scapulae. During the Upper Paleolithic in Europe, woolly mammoths provided shelter in the form of their huge bones. The bones used for dwellings were long and flat, tusks, or connected vertebrae, and were often lashed together or implanted in the soil. That the Neanderthals constructed these shelters suggests they are smarter than they are popularly depicted.

The shell of a fellow Pleistocene megafauna, the Glyptodon, was also used for shelter by early humans.

Antique buttons made of bone

In Paris in the 13th century, guilds of buttonmakers made buttons from a variety of materials, including bone. In the 14th century, buttons were commonly made of bone or wood.

Antique bone buttons are distinguishable from modern buttons by their greater weight, dry feel, and slightly variable size. These antique buttons were made from the shinbones of cattle.

Meat and bone meal was formerly used as a livestock feed. It was banned because it was thought to be responsible for the spread of bovine spongiform encephalopathy (mad cow disease.) Consequently, billions of pounds of meat and bone meal were designated as waste, contributing to landfill overflow.

Fehime Vatansever and his colleagues at Clemson University responded by designing a plastic, based on meat and bone meal. The raw material was mixed with ultra-high-molecular weight polyethylene (UHMWPE), a tough material used in skis, snowboards and replacement joints. The resulting composite is nearly as durable as UHMWPE. It is partly biodegradable, uses less petroleum than pure UHMWPE, and makes a use out of a substance that would otherwise be diverted to landfills.