All right-minded individuals love their animals, but some animals have been so loved, or provided such a service to humans, that they’re remembered fondly years and years after they were alive.

Here are 10 of the most famous animals in history.

Ham the chimp was the first hominid in space and, thankfully, his is a happier tale than that of the first dog, who’s mentioned further down this list. Named after the Holloman Aerospace Medical Centre, he was one of six monkeys trained to pull levers in response to flashing lights during a spaceship flight. Ham was the one who was chosen by NASA to be launched into space in a Mercury capsule. The journey he undertook on January 31, 1961 was short, but he still managed to travel 155 miles (250 km) in 16.5 minutes. The flight was abandoned because of a problem with the oxygen supply, and Ham was recovered some three hours after he landed, apparently none the worse for his trip; he even ate an apple and half an orange when he exited the rocket. Ham went on to live in the National Zoo in Washington DC for the next 17 years of life.

Elsa the lioness first came to the world’s attention with the publication of the book “Born Free,” by naturalist Joy Adamson. The lion cub didn’t have a great start to life; her mother was killed by Joy’s game warden husband George, to stop an attack on him. The Adamsons thankfully took the cub and her siblings in, keeping Elsa and sending the others to a zoo. The young lioness lived the life of a domesticated pet, but Joy was determined to give her a life in the wild, gradually introducing her to the world of game reservations. Elsa had three cubs, who  probably became fully adjusted to their life in the wild, but Elsa unfortunately died at an early age, succumbing at the age of five to a tick-born disease called babesia. George Adamson and his scouts fired 20 volleys of shots over Elsa’s grave at her burial.

Jonathan the tortoise is at least 179 years old, and the world’s oldest living animal. This is difficult to verify, though there is photographic evidence to help shore up the claim. The photograph was taken during the Boer War in 1900, on the island of St Helena which he still calls home. He was at least 50 years old at the time, and might well have been 70, so 179 is his minimum age. Jonathan enjoys life with five companion tortoises and, although sightless in one eye, age hasn’t worn him down too much. He loves attention, and is still feisty enough to be able to make amorous advances toward his younger female friends.

On November 15th, 1962, a tea-drinking, snake-killing mongoose called Mr. Magoo was taken from Duluth jail by the US Fish and Wildlife Service, and sentenced to death or deportation back to his country of birth, India. The story got out and caused a national uproar. He had been given to the zoo by a foreign sailor, and the powers-that-be decided he shouldn’t be allowed to remain in the country, because of the mongoose’s propensity to breed. Mr. Magoo didn’t have a mate however, and he was eventually given a reprieve. Thousands of people visited the unlucky carnivore in one weekend, and many more mailed the authorities to tell them to get rid of the beast (fear of his escape and the area being overrun by fearsome critters caused that reaction). In the end, Mr. Magoo was given a pardon, and lived out the rest of life eating eggs, drinking tea and having free rein of the zoo office. He died in 1968. The most famous groundhog in the world, Punxsutawney Phil (also known by his full name, “Punxsutawney Phil, Seer of Seers, Sage of Sages, Prognosticator of Prognosticators and Weather Prophet Extraordinary”) has been predicting the weather in Gobbler’s Knob since February 2, 1886. Incredibly, some people believe that he’s still the same groundhog today. As these animals have an average lifespan of only ten years, he would have to live on regular doses of elixir along with the love of his good wife, Phyllis, to keep him going all this time. A mysterious group called the Inner Circle look after him, and wear top hats and tuxedos to the prediction ceremony. The prognosticating groundhog is thought to derive from a German tradition that if the sun comes out on candlemas and the hedgehog sees his shadow, six more weeks of winter will follow. 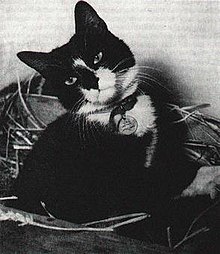 Unsinkable Sam was a remarkable cat who managed to survive three shipwrecks during the Second World War. The first sinking ship that Sam (then known as Oskar) managed to survive was the Bismarck, downed in a sea-battle on May 27, 1941: Sam lived while over 2,000 crew died. He was the only survivor picked by the British battleship the HMS Cossack, and was coincidentally renamed Oscar. The Cossack was in turn damaged by a German torpedo later that year. As it was being towed to safety, an explosion ripped through the ship, killing 159 men. Oscar survived and was brought to shore at Gibraltar. By now called Unsinkable Sam (luckily, cats don’t care what their name is,) he was brought to live on the HMS Ark Royal, which had been involved in the original fight with the Bismarck. It too was torpedoed, and all but one crew member was saved. Sam was found “angry but quite unharmed,” floating on a plank. Thankfully, Sam stayed away from ships after that, and he eventually died in a seaman’s home in Belfast in 1955. The US Army Signal Corps in France during World War I had a lot to thank Cher Ami the homing pigeon for. During a particularly deadly battle, Ami was one of 600 pigeons given to the regiment by British breeders, so that the Americans in France could train them for messaging duties. Ami flew a total of 12 important missions over several months in 1918, and his final journey took place on the afternoon of October 4, 1918 during the Battle of the Argonne. The corps were being shelled by their own men at the time, and Major Whittlesey, the officer in charge, sent Cher Ami off with a little note attached to his leg telling them to stop it. Even though badly wounded in the chest, blinded in one eye, and with one leg hanging off, the little bird managed to carry on, and saved the lives of more than 200 men. He was patched up after his momentous flight and given a wooden leg, but died less than a year later.

Marocco the Dancing Horse was so famous in 1591 in the United Kingdom, that he was immortalized by Shakespeare in “Love’s Labours Lost” (in which he’s referenced as “the dancing horse”.) His abilities were wide and varied, including counting coins by stamping his hoof, dancing on two or four legs, and bowing to the Queen when required. He was also thought to be psychic, because he moved his legs in reply to certain questions. This, however, is the skill that nearly cost the horse and his owner, William Bankes, their lives when they were tried for witchcraft, found guilty and condemned to death. The judge was apparently moved when the horse knelt in front of him to plead for his owner’s life, however, and both were pardoned. Though little his known about his life afterwards, Marocco’s owner lived quite comfortably on the earnings that his horse made for him. 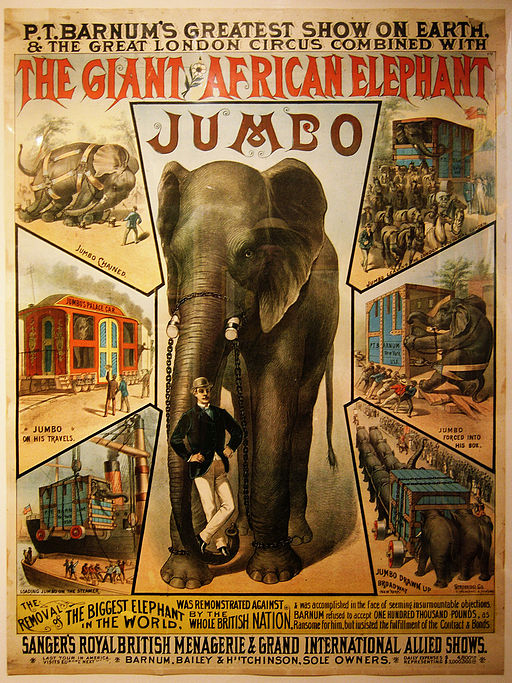 The original Jumbo was a thirteen foot, six-ton African elephant born in 1861: the name came from “Jumbe” – Swahili for “chief.” Jumbo traveled from the French Sudan to the Jardin des Plantes zoo in Paris and, when still only four years old, moved again to the London Zoo. As he was becoming  grumpy and difficult to control, he was sold to P.T. Barnum for $10,000, to the consternation of the British public. Queen Victoria actually received over 100,000 letters pleading for her intervention in the matter. He seemed to be a happier elephant with Barnum’s circus, however. Well, that is until he died of terrible injuries as the result of a train crash three years later. A young stray dog named Laika, who was found wandering the streets of Moscow, was destined to become the first canine in space. Unfortunately, Sputnik 2, in which Laika was launched into orbit, was a rush job due to Soviet president Nikita Khrushchev wanting it launched in time for the 40th anniversary of the Bolshevik Revolution on November 7, 1957. The official story for years was that Laika died of oxygen depletion six days into the journey (the Russians hadn’t at that stage worked out how to bring their rockets home), but in 2002 it was finally announced that the poor thing had succumbed just six or seven hours into the flight, dying of excess heat (due to there not being a heat shield) and stress. Laika’s memory lives on, however, as a plaque and statue stand as a memorial to the little dog at Star City in Russia.