Freak shows were much more popular fifty years ago than they are today. In fact, they are now illegal in some states. Freak shows were common at state fairs, carnivals, and circus sideshows. Curtains would be tightly drawn around the various “three-headed lady” or “alligator boy” tents. Curious customers wondered what was inside, and perhaps even forked over some cash to take a peek. More often than not, the customers would be heartily disappointed because most of these shows were a ruse. Most, but not all…

Here are the top 10 freak show acts of all time: 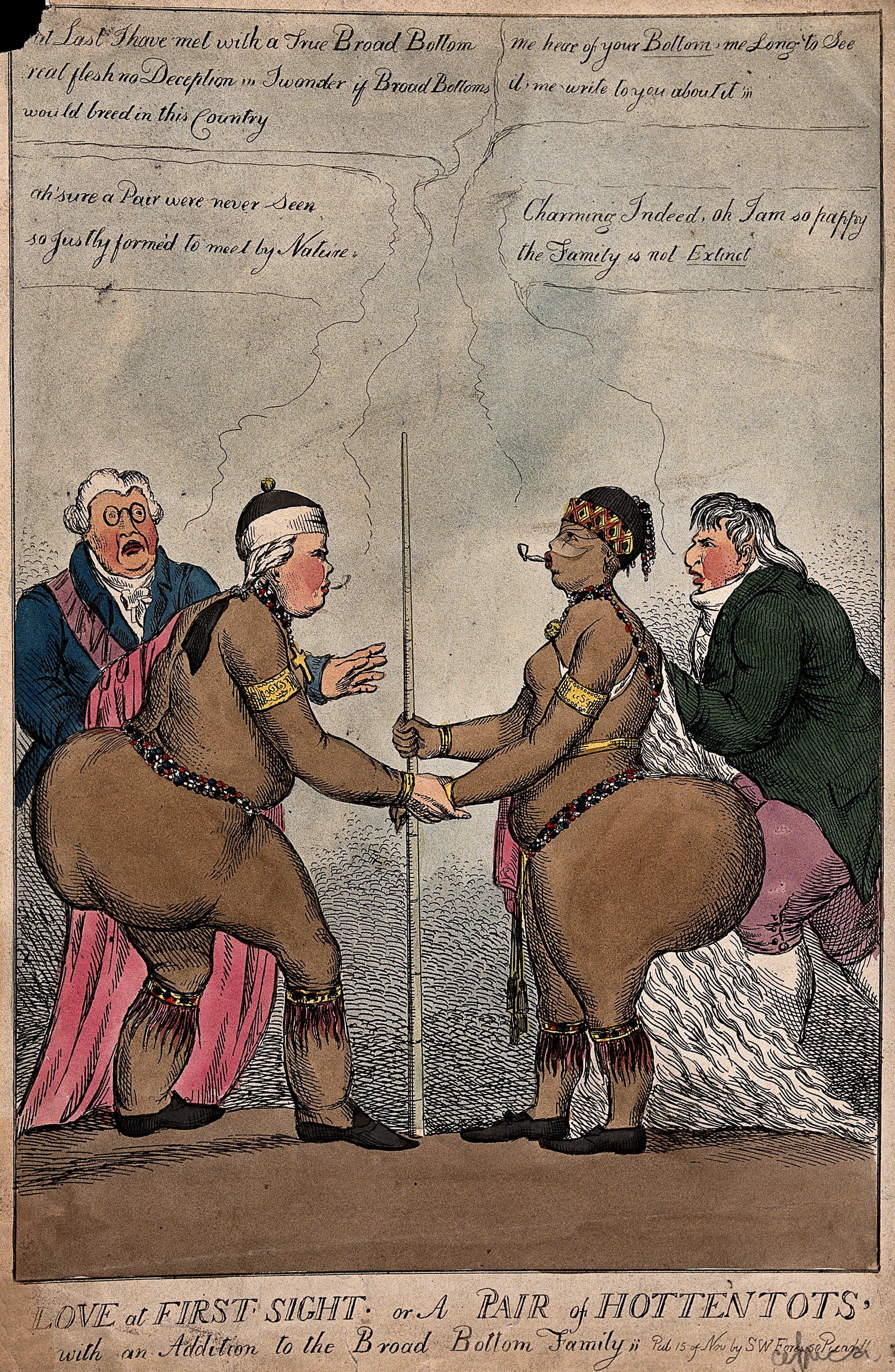 Saartjie ‘Sarah’ Baartman’s stage name was the Hottentot Venus. She became a popular sideshow attraction during the 18th century thanks to a European fascination with African ‘natives.’ Her features attracted men and women who would come to see her in the name of science, lust, or curiosity.

At the time, people from many different cultures (including North America, Africa, and Asia) were brought to Europe and treated as exotic animals rather than people, exploited in the name of entertainment. Some were kidnapped, others tricked. Khoikhoi women, of which Sarah Baartman was the most famous, were often promised wealth and fame in return for touring the countryside. These promises never came to fruition, and the women were bought and sold amongst entertainers as valuable commodities to add to the entertainer’s repertoire. The title of these Khoisian dance attractions was often something like “The African Goddess of Love.”

South African president Nelson Mandela requested that Saartjie ‘Sarah’ Baartman’s remains be returned from France (where she died at the age of 25). After being treated like an animal in a strange country (she was even caged), she was finally given a dignified resting place near her birthplace on Women’s Day, 2002. 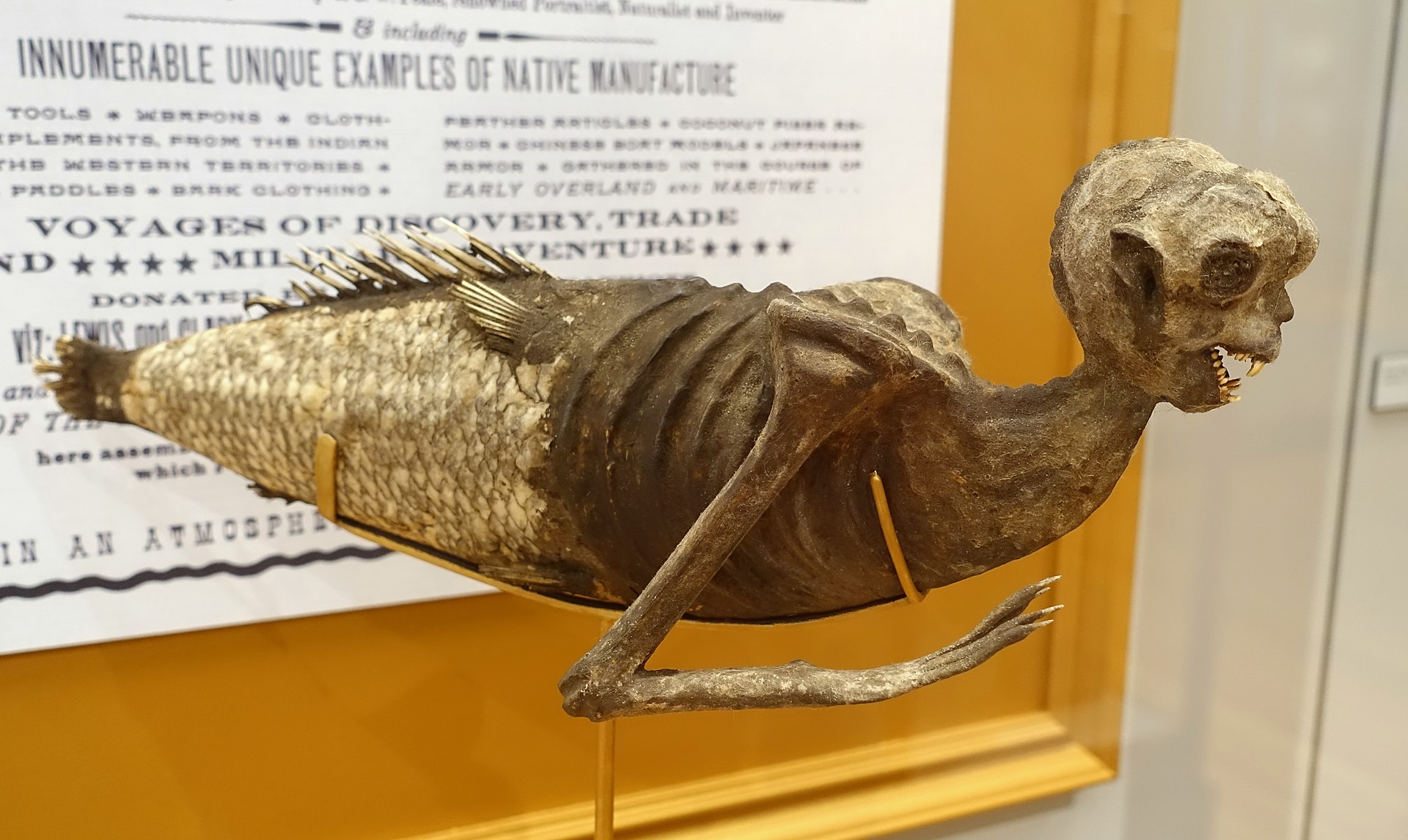 At some point in the 1800s P.T. Barnum (partner with James Anthony Bailey in the Barnum and Bailey Circus) came up with an incredible business idea. Entrepreneurs in other types of business might develop a new type of vacuum cleaner or a system for delivering frozen foods, but Barnum’s unique trade led him to invent one of the ultimate freak show creations of the time: The Fiji Mermaid.

Although there are conflicting reports detailing his methodology in creating this phony monster, the basic idea remains constant throughout history. It involved the acquisition of the lower half of a large fish, preferably something with a skeletal structure that could be proportionate to the skeleton of a monkey. The fish skeleton was then attached to the skeleton of the monkey, removing the monkey legs beforehand to make the new skeleton appear to be a sea creature. Add some papier-mâché or a few scraps of fur and, bingo, you’ve got yourself a Fiji Mermaid! Patrons will pay a minimal fee to catch a glimpse, but startup cost is pretty damn low and so is maintenance. In fact, according to one report, Barnum allowed customers to view the mermaid in his museum at no extra charge. As a result, ticket revenues tripled.

Although the Fiji Mermaid is not “real,” the concept behind its creation is enough to place it in the top ten freakish carnival sideshows of all time. Seriously, who cuts up skeletons and fuses them together as a way to make money? Congratulations, Barnum, you’re a top-notch freak. 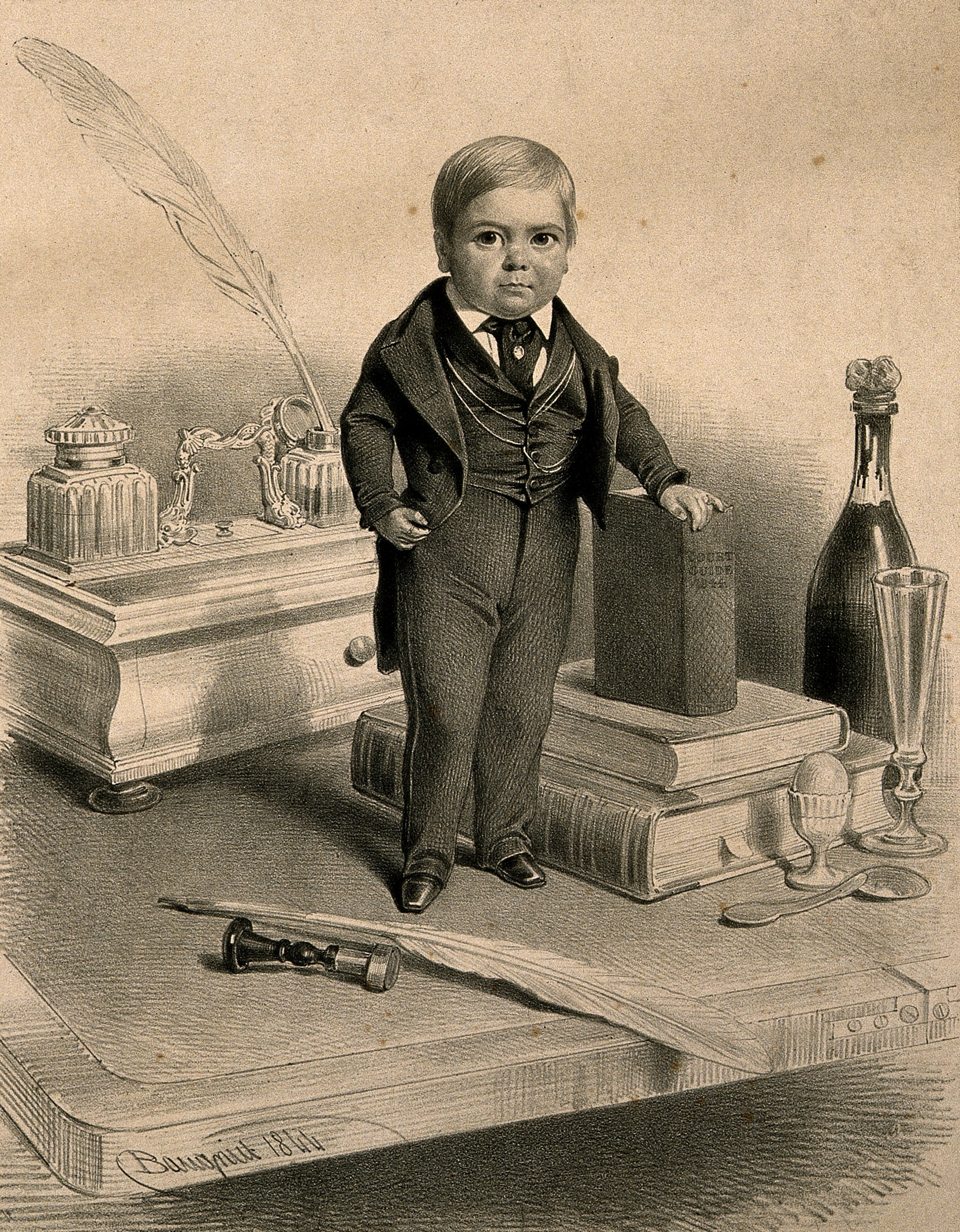 P.T. Barnum was exploiting real humans before he promoted fake mermaids in his show. Earlier, he had sought out his fifth cousin Charles Stratton, a four-year-old boy who had hardly grown an inch from the time he was six months old. Barnum explained to Charles’ father that the young man could make a living for the family if he joined his circus organization. Charles, who was otherwise unemployable in those times due to his height and size (not to mention his age), was eager to step onstage. Barnum taught him to dance, sing, dress up, and impersonate famous people.

The act toured in the late 1700s, when Barnum and Stratton’s father (both obviously shameless and exploitative businessmen) went into business together as circus pioneers. Young Charles Stratton, just five years old at the time of his first shows, performed under the stage name General Tom Thumb, and wowed audiences in the United States with his complex routines and hilarious antics despite his young age and debilitating condition.

7. The Black Scorpion (also performs under the name Lobster Boy) 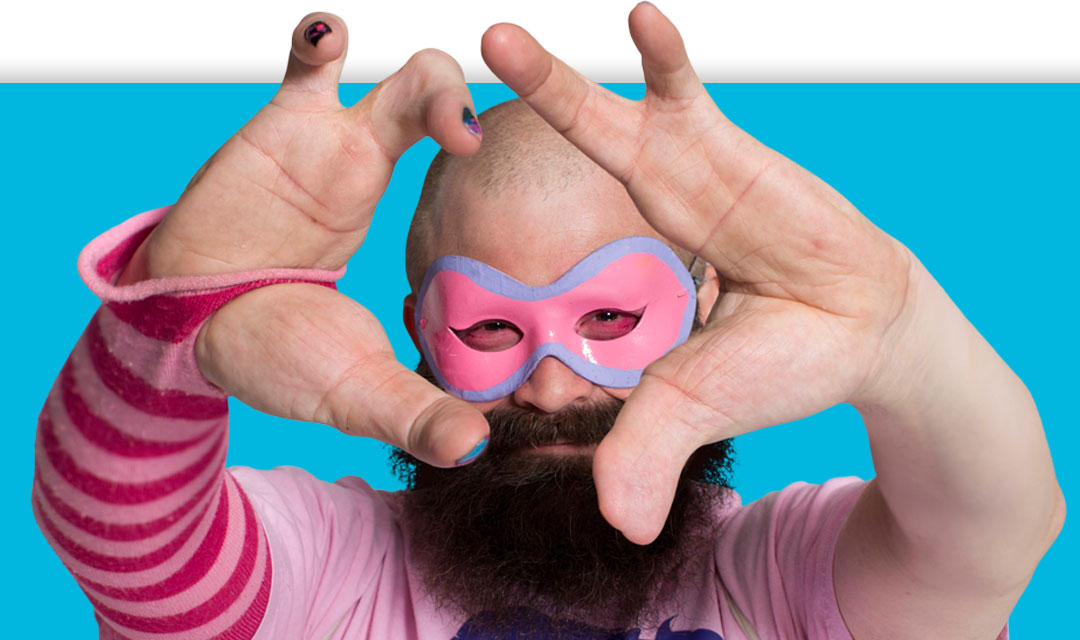 This is one of those sideshow gags that sounds much more “insane” than it really is. Going by the name “The Black Scorpion” or “Lobster Boy,” this unique “claw handed” character works as a positive force in the world of freak show entertainers, increasing the perception that freak shows are a good thing, not a derisive or negative force in the world of entertainment.

In 2008, The Black Scorpion joined an exhibit at Coney Island’s Sideshows by the Seashore and was filmed for TLC’s hit television show, Taboo. Lobster Boy is using his deformity to transform his industry into something better (image: Leber, coneyisland.com).

The Jones Twins, a Siamese twin couplet who toured the nation in the late 1800s, are a tragic story of the overlooked human element of sideshow attractions. Oftentimes we forget that these spectacles are human beings; human beings who are often limited from securing traditional employment due to their unusual conditions. The Jones Twins, only 15 months old at the time of their deaths, had been a sideshow attraction for upwards of half of their lives. The exact reason for their deaths is unknown. 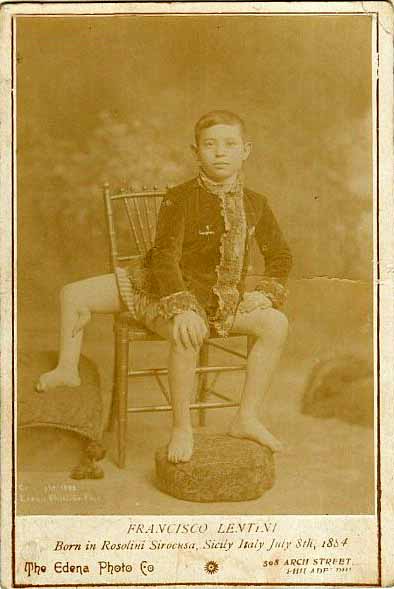 Born at the turn of the 20th century, Frank Lentini ultimately became one of the world’s most successful and long-lived sideshow acts. His condition was incredibly unique: Lentini had a third leg. This, on its own, was enough to attract an audience; but, what shocked people even more was the fact that the three-legged man was also equipped with two sets of fully-functioning genitals. Although he was never known to show off this often-aspired-to peculiarity, it was enough to land him a beautiful wife, Theresa Murray. She was the mother of his four two-legged children. One can only imagine the most audacious question asked by audience members: “Frank, we know you’ve got two, but which one do you use?” The answer will never be known. 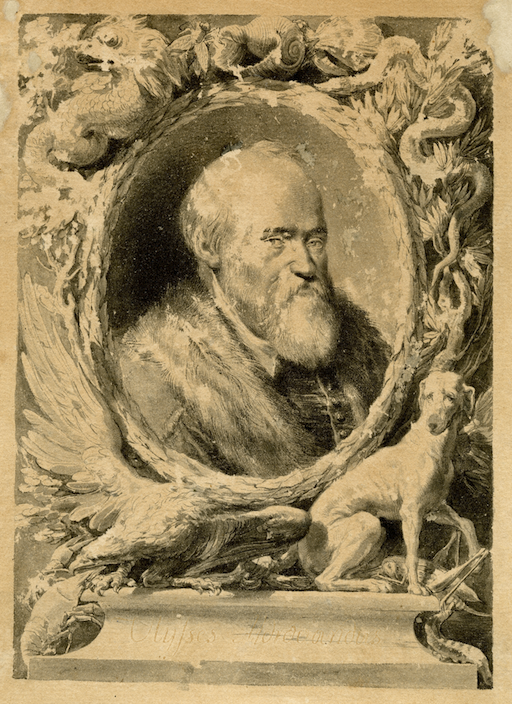 The name is quite ambiguous, and at first we assume that these freak show stars might be selected individuals from bands like Blink 182 or Sum 41 who have been submerged in vinegar and put on display. Unfortunately, the popularized “pickled punks” side show attraction is much more morbid than that. A “pickled punk” is a term used to describe an unborn (or stillborn) fetus that has been preserved in a pickle jar of formaldehyde.

This sideshow attraction was apparently devised in the 1600s by King Frederick III of Denmark, who collected numerous pickled punk specimens. The collection of Ulisse Aldrovandi, an Italian naturalist (pictured above), reached over 18,000 preserved specimens.

NO Image, do a Google Search.

What could be more unbelievable than this photograph? The fact that Chelsea Charms claims to have never undergone any sort of breast augmentation surgery. All natural, or silicone enhanced? You be the judge.

Joseph Merrick, a 19th century sideshow performer, was the victim of a condition beyond words. While many sideshow entertainers retain the ability to speak, smile, or look half-way normal in the face (or at least some part of their body), Elephant Man Joseph Merrick, the British runaway and lifelong carnie, was deformed beyond human identification. Although he may have appeared to have both arms and legs, Merrick’s rampant congenital disorder caused abnormal growths to occur all over his body. In the end, judging by the numerous pictures available online, Merrick is more disfigured than human-figured. He was never able to live anything close to a normal human life, and his emotional state and mental abilities vary from report to report.

These Italian conjoined twins made their living by entertaining carnival audiences with the simplest act imaginable: standing there. They toured in Europe in the 1600s, and pioneered the idea of a “freak show,” a concept that would later spawn careers for countless individuals who were born with genetic abnormalities or defects.

Unfortunately, the brothers were not “all there.” Joannes Baptista, the smaller of the two conjoined twins, was a mere protrusion in the chest of his mobile counterpart. He could not speak or act freely, but rumor has it that he would squirm and shake his hands and arms if poked in the breast. These sorts of anomalies drew more and more people to attend their visits to local townships, and it is rumored that the brothers made a comfortable living from these “freak show” tours.

Humans can do some amazing things.
Human beings love breaking records and here are 10 bizarre records owned by humans. Or, are you still looking for weird things in nature.
Other Articles you Might Like
Liked it? Take a second to support Toptenz.net on Patreon!