While we often imagine that the twentieth century was the era in which the greatest advances in technology and science occurred, many often overlook the remarkable advances that came out of the preceding century—advances which in themselves were equally as astonishing in their era as those of the twentieth century were for us. It’s also important to recognize how these advances laid the foundation for the unprecedented growth of the 20th century, without which we would still be riding about in horse-drawn carriages and struggling to keep our kerosene lanterns lit. What were these inventions? Here, in no particular order, are the ten greatest inventions/discoveries of the nineteenth century and what they mean for us today. 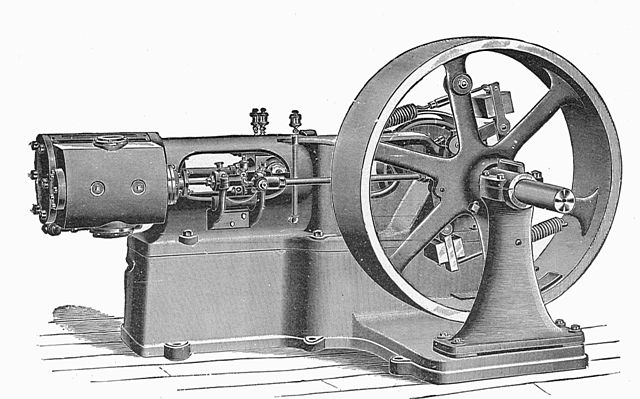 Though steam as a means of power had been first experimented with by the ancient Greeks and Romans thousands of years ago, and the first experimental steam engines had been manufactured as early as the late seventeenth century, it wasn’t until the turn of the nineteenth century that it became the truly practical energy source which was to ignite the industrial revolution. In fact, it is impossible to imagine the nineteenth century without the steam engine, for in many ways it was the driving force behind America’s western expansion, played a major role in the North winning the Civil War, and helped the United States take its first tentative steps towards becoming a regional power. True, it was to be eventually superseded by the more powerful and efficient power plants of the future, but during the nineteenth century steam was king.

Of course, for the steam engine to have any practical application, it had to drive something, and that something—at least at first—was the locomotive. First appearing in the United States in 1829 with the Baltimore and Ohio Railroad’s Tom Thumb demonstration locomotive, by the middle of the century literally hundreds of engines were operating in the country and by the end of the nineteenth century, the entire nation could be crossed by rail in a matter of days. To appreciate the locomotive’s impact, just try to visualize the nineteenth century without its familiar smoke-belching engines chugging along endless expanses of iron track and see how you do. It could truly be said that in many ways, it was the locomotive that made America what it was and is today.

The idea that a person’s voice could travel through a wire was considered something akin to witchcraft when it was first proposed, but by the time Alexander Graham Bell patented his “electric telegraph” in March of 1876, it was not only a reality, but was to forever change the country. Now it was possible for people to interrupt other people’s meals or get them out of the bathtub from the comfort of their own parlor. The only question that needs to be asked, however, is who really was the first to design a practical phone? Was it Johann Reis in 1861? Antonio Meucci in 1871? Elisha Gray in 1876? The issue remains hotly debated to this day, though in the end, does it really matter? 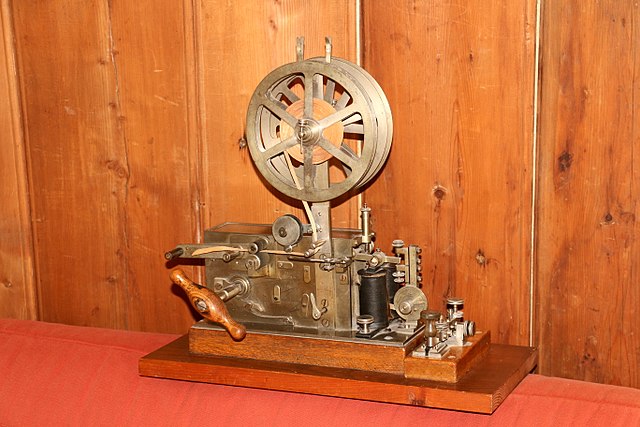 Though under development in Europe for several years, the telegraph was developed independently in the United States by Samuel Morse and his assistant, Alfred Vail, in 1837. (It was actually Vail who invented Morse code, which makes it difficult to understand why it isn’t called Vail Code.) By 1843 Congress—in a rare moment of far-sightedness—appropriated the money to wire the country and the rest is history. How did it change things? Consider that Lincoln got word of the outcome of the Battle of Gettysburg within hours of the guns falling silent and could order his field commanders to new battlefields in a matter of minutes from the telegraph office a few doors down from his office in the White House. Before that, such things would have taken days or even weeks to accomplish. 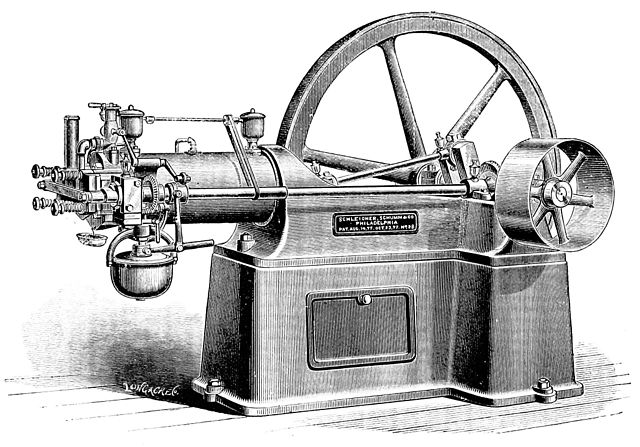 While steam remained the primary power source throughout the century, by the end of the 1880’s its successor—the internal combustion engine—was making its first appearance, both in the form of the gasoline powered four-stroke engine and the more efficient diesel engine. Though both were not yet developed enough and remained largely underpowered during the waning years of the nineteenth century, they were to lay the foundation not only for the ultimate demise of the steam engine, but for a number of industries people at the time could only imagine: the automobile, the airplane, and even the five-speed, multi-level adjustable lawn mower. Plus, despite all the bad press fossil-fuel powered engines get nowadays, they produced a hundred times less pollutant than coal-fed steam engines.

Though the trusty old musket and front-loading cannon had been around for centuries, it wasn’t until the mid-nineteenth century that the firearm really came into its own to become the epitome of cutting edge technology for its era. First was the advent of rifling, which improved both accuracy and range; then it was the invention of the cartridge, which did away with powder and flints and made it possible to increase the rate of fire exponentially; and finally it was the advent of breech loading, which made it possible to load a rifle or cannon from the back rather than from the front. Put them all together and you’ve got carnage on a large scale, which was to be, in many ways, the scourge of the twentieth century. 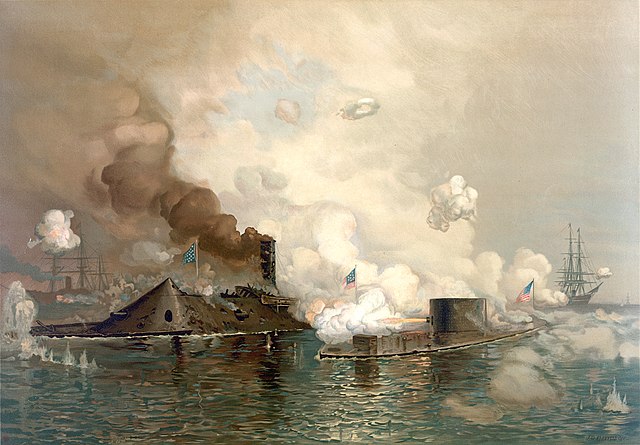 “The Monitor and Merrimac: The First Fight Between Ironclads”, a chromolithograph of the Battle of Hampton Roads, produced by Louis Prang & Co., Boston

Along with steam and breech-loading guns came the biggest revolution in shipping in thousands of years: the replacement of sail and wooden ships with great behemoths belching smoke and wrought in riveted iron. So swift and complete was this transformation that by the end of the century sail was considered a quant anachronism while even the smallest freighters were being built out of metal and powered by massive steam-engines. Its impact on warfare was even more immense, with Trafalgar-like battles between scores of ships of the line spewing cannon balls at each other from a few hundred feet apart being replaced by metal monsters hurtling shaped charges at each other from miles away. Not quite as romantic as in Nelson’s day, but spectacular none-the-less. 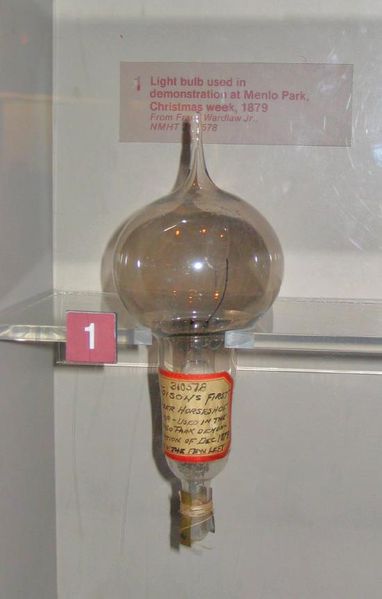 Thomas Edison’s first lightbulb which was used in a demonstration at Menlo Park… Original source: http://www.classstudio.com/scaltagi/img/internship/sightseeing_day2/edison_bulb.jpg

Where would we be without electricity—or the light bulb? Probably sitting in the soft glow of our kerosene lantern wondering why the toaster isn’t working. Clearly, the advent of electricity in the waning years of the nineteenth century had an enormous impact on society, for it not only reduced the fire danger by replacing gas-fed street lamps with non flammable electric light bulbs, but paved the way for everything from the television and the radio to the refrigerator and the curling iron. Of course, it also brought us the electric chair, but that’s another story. 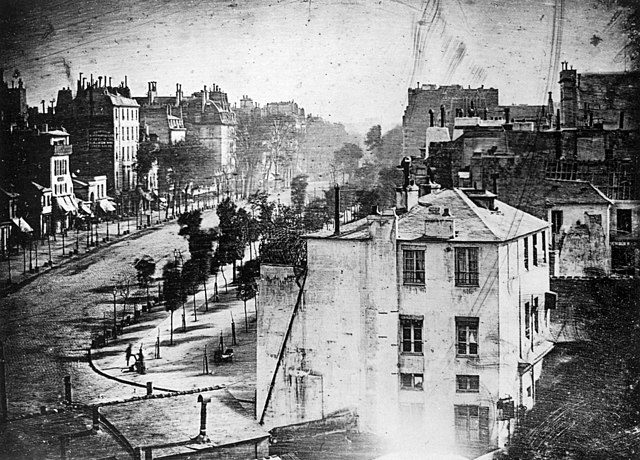 Boulevard du Temple, Paris, 3rd arrondissement, Daguerreotype. Made in 1838 by inventor Louis Daguerre, this is believed to be the earliest photograph showing a living person. It is a view of a busy street, but because the exposure lasted for several minutes the moving traffic left no trace. Only the two men near the bottom left corner, one apparently having his boots polished by the other, stayed in one place long enough to be visible. As with most daguerreotypes, the image is a mirror image.

‘Up to the 1840s, one could pay a portrait artist handsomely to make themselves appear less ugly and more heroic than they were in real life; with the introduction of photography, however, all that went out the window. Suddenly people could be photographed as they really appeared: dour, unsmiling, grainy, and not at all happy to find themselves stuck living in the nineteenth century. Plus, by the 1890s the first motion picture cameras had been introduced, showing people as they looked when they moved about in the cheerless century as well. I guess that’s progress…of a sort.’

Some may be surprised to see what is considered a lesser known invention to my list, but consider the impact Eli Whitney’s little invention had on this country: until then, slavery was only morally wrong. With his cotton-picking machine capable of producing twenty bails of cotton for every one produced by slave labor, he made slavery economically unfeasible as well. Of course, in demonstrating to southern plantation owners they no longer needed slaves to harvest their crop, he also hastened the advent of the Civil War, but then no important advance in the human condition is ever without its price.