Halloween is a time for children to go out into the night and have some fun, and for the parents of those children to utterly humiliate their offspring with terrible costumes. But how are childless adults supposed to enjoy the holiday? Well, you could go to a party, get roaring drunk and make out with Batman—or you could embarrass your canine companion with a tacky costume. It’s the perfect way to tell your dog that you hate it, and the world that you’re comfortable with dying alone. 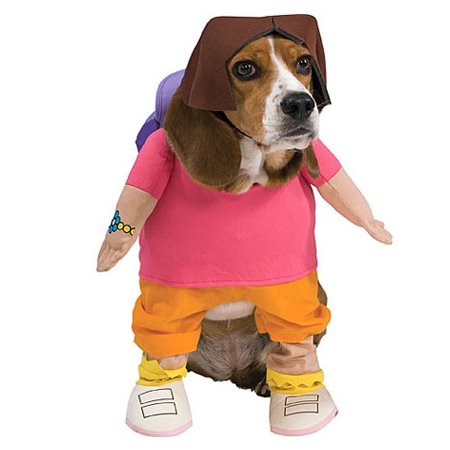 So we’re guessing the creators of this costume didn’t intend to make it look like Puddles here ate Dora the Explorer and stole her scalp, but that’s sure what they ended up with. The severed arms draped over the neck nicely compliment the canine homicide theme, and as an added bonus they make your dog look like a six-limbed nightmare beast. Do you know kids who like Dora? They won’t anymore!

“This dog is ready to strip!” Strip down to what? The natural condition all dogs are in all the time? Guys, adding clothes where clothes didn’t exist is the opposite of stripping. What else do you sell, fire extinguishers full of kerosene? 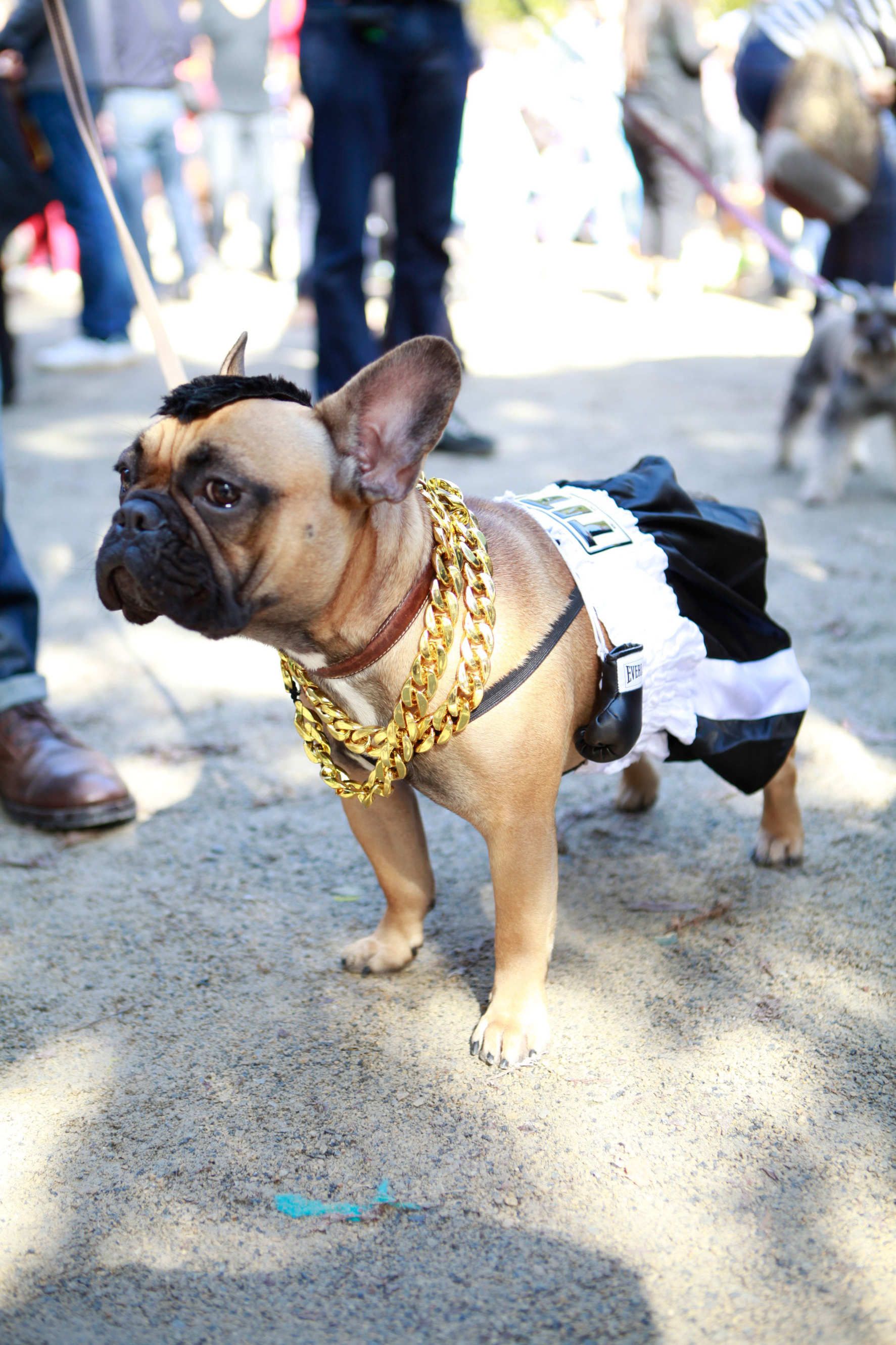 If you can remember the last time Mr. T was culturally relevant, you should have better things to do than play dress up with your dog. “They’ll pity the bull who tries to muscle in on your four-legged friend,” we’re told, because catchphrases never grow old and hackneyed in the magical unicorn world this costume was designed in.

But even if you’re Mr. T’s biggest fan/stalker, this dog clearly doesn’t share your love. One look into his sad, sad eyes is enough to make you want to punch your way through time and prevent him from being tortured. 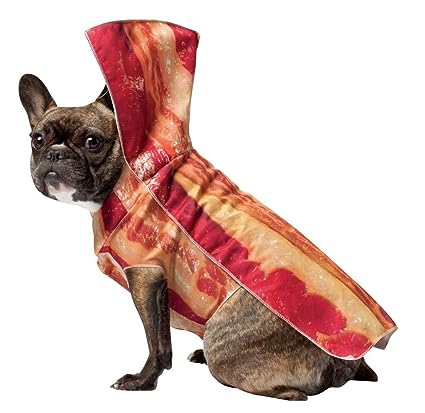 As we’ve previously established, the bacon fad needs to die the artery clogged death its proponents have coming to them. That it’s made its way to dog costumes, of all mediums, is yet another dire reminder of how far this once noble food has fallen. Also, we’re not the only ones who think it’s weird to dress your dog up as something edible, right? Walking home from the Halloween party runs the risk of being attacked by starving, intoxicated hobos.

Hey, we think we just found our new band name.

Didn’t we just go over this? Why must you pick the saddest looking dogs to model your costumes, designers? Are you unholy terrors that feed on shame and embarrassment? Are you Republicans trying to satirize the monarchy? Are you insane asylum escapees? It’s probably that last one.

“Doesn’t everyone deserve to be Queen for a Day? Make this your pet’s special day and outfit the lucky critter in a fabulous Queen costume,” we’re told. Yeah, it will be a special day alright. The day scientists discover animals are capable of committing suicide. 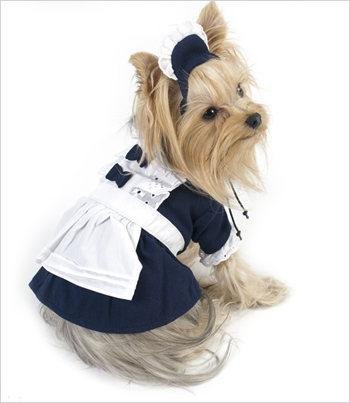 Fetish costumes and your dog, together at last. Put the “best” in bestiality with an outfit that will inspire conflicting emotions in canine and human alike.

And why stop there? Wear a matching outfit and give the men at your Halloween party their most awkward erections since Junior High.

Hell, why not open a doggie strip club while you’re at it? Name it Fetch and put an ad on Craigslist. You’ll be swimming in sexually deviant weirdo money before you know it! 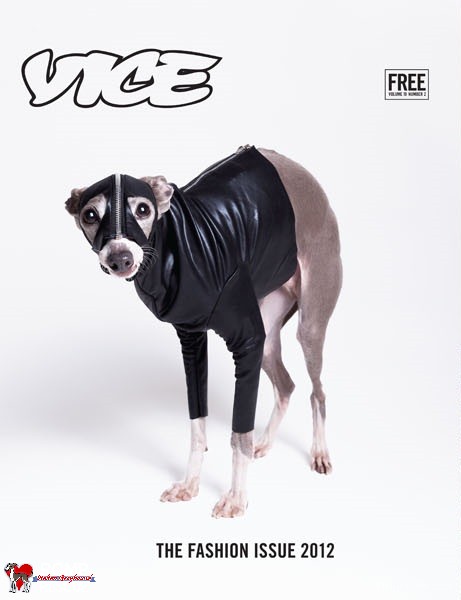 It comes with a corset, riding crop, collar and special attention from the NSA. If you can find anyone who won’t think you’re weird for buying this, you do not want to meet them. They live in an abandoned warehouse and call themselves Mr. Hugs, regardless of gender. They collect knives. 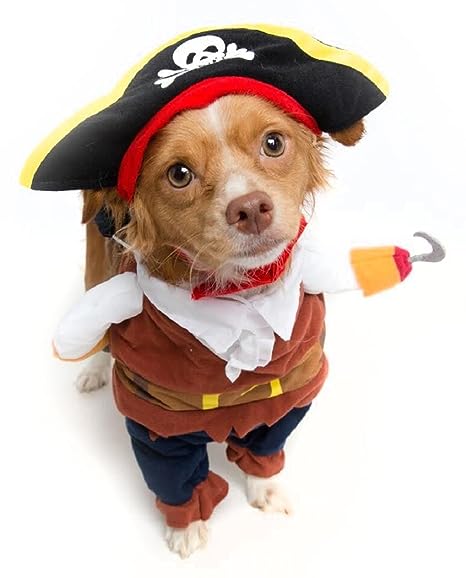 Yes, let’s put an eye patch and hook on our pets, because what dog needs to walk and have depth perception?

What exactly were you expecting, hmartin04? Look at that picture and tell us how you could anticipate any sort of quality product. We’d consider it an improvement if they accidentally shipped us a box of poisonous centipedes. 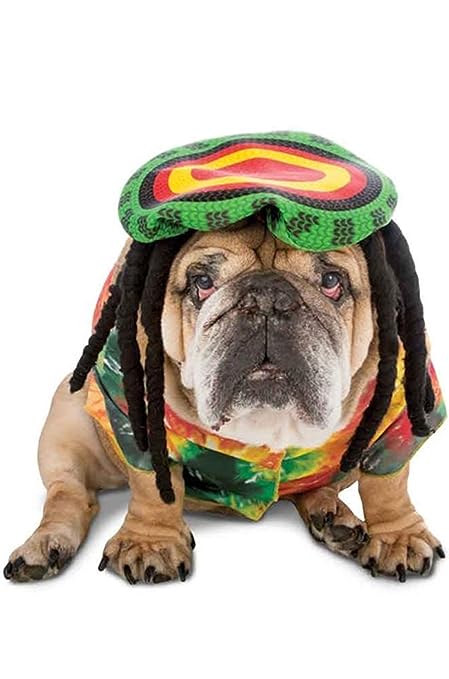 Look into the eyes of Bark Marley there and you’ll see confusion and fear writ large. This poor, simple creature doesn’t know why it wears sunglasses, a necklace and fake human hair, nor even what these things are. But it knows it is wrong, as sure as it knows kibble tastes good and balls must be chased. It looks through douchey shades, darkly, and sees truths it was not meant to know. It sees that its fellow living beings are judging it. It sees the existential horror of its tragically brief lifespan. It sees that its owner is actually kind of a dick. 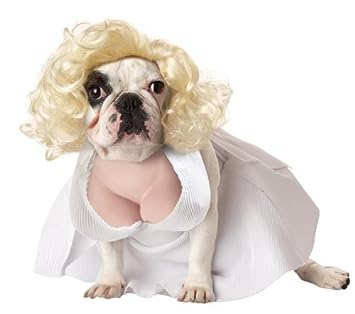 Yup. This is it. This is what we’ve come to. Someone, somewhere, made money designing fake breasts for dogs. And though we despise their actions, in a way we’re all responsible. We, as a society, allowed this to happen. One man or woman may have invented dog breasts, but generation after generation of humanity built a civilization that made that invention not only acceptable, but commercially practical. We have failed our forefathers. We have failed any god or gods you believe in. We have failed ourselves.

It gets worse. This is not an isolated insanity created by a mad boob scientist. The dogs with breasts costumes are legion.

Remember what you’ve seen here as you enjoy your Halloween. If you see any dogs wearing these costumes, it is your ethical responsibility to rescue them. You won’t just be saving an innocent animal—you’ll be helping to save humanity from itself.