“Based on a True Story” is generally a pretty dubious claim for a movie to make. Hollywood is notorious for taking things that actually happened and throwing in enough flashy stupidity to keep the lowest common denominator distracted from how overpriced movie tickets are.

But sometimes movies actually do pull truth from reality, and it’s not always the movies you’d expect. Sometimes they’re not even very good movies! We’re talking about…

(EDITOR’S NOTE: Now and then we like to dig back into the TopTenz.net archives and re-share some of our best content as TopTenz Classics. Please enjoy this classic list from 2014.)

If you haven’t seen Ilsa: She Wolf of the SS, then you’re in luck, because the whole thing’s on YouTube for some reason. Keep in mind we’re not actually recommending it (it’s one of the least safe-for-work things that exist, what with the sex, torture and gratuitous Being-A-Nazi), but yeah, it’s all there. And so are its sequels.

The titular Ilsa is a Nazi “scientist” bent on proving that women can take more punishment than men. Her methods include a lot of torture and nudity — it’s basically the 1970’s version of Hostel, except even worse. Somehow.

And yet, it’s based on fact: Ilsa Koch and Irma Grese were female concentration camp guards, going down in history as committing the most mythically horrifying personal atrocities of the Third Reich, which we won’t list here.  Like the fictional Ilsa, both these scientist women used science as a shoddy excuse to cause people a lot of pain, which makes Ilsa: She Wolf of the SS the only “based on a true story” sexploitation film we know of to have actually toned things down.

9.  The Hunt for Red October Is Actually Based on a Much Cooler Story

If you’re having trouble explaining the 90’s to your kids or younger siblings, this movie is a great place to start. Nowhere else can you see that, in the 90’s, a Scotsman could play a Lithuanian, Alec Baldwin could be a badass, and movies about submarines weren’t terrible.

Okay, okay, so Hunt is actually a pretty cool movie: Sean Connery plays the captain of a Russian submarine in charge of experimental technology who wants to defect to America to end what he sees as “a war without battles; only casualties.” However, the Americans think that he’s preparing to launch an attack, and only Alec Baldwin knows the truth because…he’s Alec Baldwin.

This one’s weird, because as far as we can tell the true story would make a way better movie. In 1975, Valery Sablin (the third ranking officer in the entire Soviet Naval Hierarchy) decided that the Soviet Union was failing but, instead of defecting like that cowardly Scotsman, he decided to sail his Frigate, the Storozhevoy, directly into the Baltic and broadcast revolutionary propaganda. That’s right: instead of running away, Officer Sablin was actually trying to start a revolution.

8. Final Destination Based Its Opening Scene on a Real Plane Crash

The Final Destination series of films exists in that weird niche where they make a ton of money (or at least enough to warrant sequels) but never manage to be any good. The ongoing premise is that the characters “cheat death” in one manner or another, and then spend the rest of the movie dealing with the fact that Death doesn’t like to be cheated. As far as “ideas for a good movie” go, this barely seems to qualify as an “idea,” but the producers have struck it rich five times over and we haven’t, so they obviously know something we don’t.

Obviously, the actual premise has never happened, but the opening scene did: As Roger Ebert pointed out in his review, the plane crash from the first film (where death is initially cheated) is based on TWA Flight 800, the third-worst airborne disaster in US History.

The movie’s version has a different flight number, but is headed to the same location, and crashes in a way that is almost identical. Ebert said he didn’t want to “belabor the point,” but we don’t feel like we’re “belaboring” anything by saying that if you base your schlocky murder-p-rn on an incident where real people died, the only thing worse than the “art” you think you’re creating is how the rest of the world has to put up with your inept, callous stupidity.

The 2004 romantic comedy starring Drew Barrymore as “Lucy” and Adam Sandler as “the same boring-ass schmuck he always plays” tells the story of a lovable, plucky veterinarian who falls in love with a lovable, quirky woman with a crippling psychiatric disability resulting from massive head trauma (as a side note, no TopTenz writer has ever been hired to write the blurb on the back of a DVD box). The head trauma is the gimmick for the film: Lucy’s short term memory is reset every time she goes to sleep, so Sandler has to woo her in a new way every day. Why doesn’t Sandler just woo her the same way each time, since he knows it’ll work and she won’t remember it the next day? We’d love to answer that but, unfortunately, this paragraph is about to end.

Meet Michelle Philpots, a British woman who suffered two head injuries in 1985 and 1990, and now has all her memories wiped clean every night while she sleeps. Like Lucy, Michelle has gotten married since her injuries, and has to be reminded of her marriage every morning by her husband, most often by being shown pictures of the event.

Her attitude is either a major testament to the human spirit, or the British’s stubborn tendency to “carry on” in spite of pretty much anything: she says she enjoys the soap opera “Eastenders,” despite never having “any idea what’s going on.” And though she doesn’t remember getting married, she does remember the day she met her husband.

Also, somewhat hilariously, that article about her seems to really badly misunderstood the plot of Groundhog Day.

6. Men Behind the Sun Will Haunt Your Nightmares As the first film to be given a “III” rating (the Hong Kong equivalent of NC-17), Men Behind the Sun (or Black Sun: 731) is one of the earliest examples of what we now call “torture p-rn.” It tells the story of “Unit 731,” a Japanese Unit during World War II that conducts experiments on Chinese and Soviet prisoners, in order to gauge their pain threshold and find out how enjoyable it is to undergo a vivisection without anesthesia (spoiler alert: not very).

Unit 731 was real. Their purpose was to develop a highly contagious version of the Bubonic Plague

to use against the Chinese, because Japan really wanted to outdo the Nazis, we guess. In addition to the “cutting people open while they’re still alive” thing, Unit 731 tested weapons on living people, infected them with various diseases and… yeah, you can read about the rest here, if you want. Though again, we don’t actually recommend it.

5 AND 4: Texas Chainsaw Massacre and Psycho Are Both Based on the Same Serial Killer

Though having little in commons stylistically, both Texas Chainsaw Massacre and Psycho have become hugely influential horror films. While the latter introduced the world to the twist ending, and what is almost universally regarded as the finest horror film score in history, the former proved that you don’t need to have plot and acting if you show women getting chased a lot by big dudes holding scary things.

Both killers (and, to a lesser extent, Buffalo Bill from Silence of the Lambs) were based on the Wisconsin murder Ed Gein. What’d Ed do to get a following in Hollywood? It’s hard to nail it down to any one thing, but we’re betting it was a combination of the fact that he was creepy-looking, had a weird obsession with his mentally imbalanced mother, and made a belt out of human nipples. There was also the mask made of human skin, the suit made of human skin, the lamp made of human skin…

It’s tragic how often it’s forgotten that Sylvester Stallone’s career — which is made up almost entirely of crap — started off with a psychologically complex and engaging story about a guy who, at the end of the day, just wants to have his efforts and hard work noticed. Rocky’s the story of an underdog who stays the underdog. It taught us that sometimes just getting a shot is enough, even if you don’t make it.

In the 1970’s, there was a little-known boxer named Chuck “The Bayonne Bleeder” Wepner and, if Rocky isn’t based on this guy, it’s one hell of a coincidence.

Okay, fine, not everything’s the same: Bleeder* is from New Jersey instead of Philly, worked as a security guard instead of a butcher shop and, by his own account, never ice skated or wore turtlenecks.

So what are the similarities? Everything else. Bleeder boxed a wrestler (like Rocky did in Rocky III), maintained a winning record, and even faced off against a black heavyweight champion: Muhammad Frickin’ Ali.

Luckily, the Bleeder got his due: he sued Stallone in 1976, and they settled for an undisclosed amount.

2. Jaws is a True Story, But Not The Way You Think Most people know that the original “summer blockbuster” doesn’t try too hard to be realistic. No shark — not even the hyper-aggressive Bull Shark — will attack that frequently, or that mercilessly, or even get that big.

Still, who cares about realism? WE DO. Jaws is a badass movie with a fantastic soundtrack but, at the end of the day, this article is all about realism.

Jaws is openly based on the 1916 Jersey Shore Shark Attacks and, though the behavior of the shark has been exaggerated for effect, the reactions of the victims isn’t. After four people were killed by an unidentified shark, the people of New Jersey panicked and launched massive shark hunts in an attempt to eradicate the “man eater” and protect the tourism industry — an act the perfectly mirrors the plot of the film.

Keep in mind, ichthyologists at the time thought that sharks in temperate climates were relatively harmless. One even claimed that it was “beyond the power of even the largest Carcharadon (Great White) to sever the leg of an adult man.”

When this was proven untrue, the shock would’ve been similar to the appearance of the massive predator seen in the classic film.

1. To Hell and Back Just Straight Up Happened 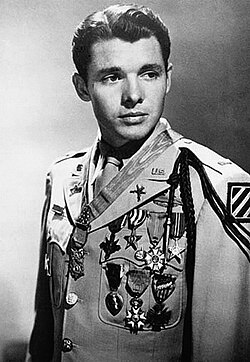 Murphy’s story is basically the story of Captain America minus the injection of super serum. Like Steve Rogers, Murphy was 5’5″, 110 pounds  and, again like Rogers, applied to every branch of the military before finally being accepted into the Army. Then he got malaria, because everyone knows war is boring if you don’t have a debilitating illness.

There’s actually no shortage of crazy stories about this guy, but the most amazing has got to be the one that got him the Medal of Honor (those stories tend to be pretty badass). At the battle of Holtzwihr, Murphy’s unit was reduced down to 19 men (from 128) by the advancing German line, so he did what any reasonable soldier would do: sent the remaining men back so he could hold the line by himself. After his M1 Carbine was empty, he climbed into a burning tank and held off an entire squad of German Infantry with a .50 caliber machine gun while calling in artillery shots.

Then he got shot in the leg.

Then his phone line to the artillery was cut.

Then he organized a counter attack. Somehow.

So, why did he decide to take on an entire company of German infantry by himself, when almost anyone else would’ve wet themselves and run away crying? In his words: “They were killing my friends.”

So it turns out that, by “reasonable soldier” we actually meant “crazy badass.” Cheers, dude.