It’s no secret that Roman society ran on slavery. Men and women captured during military conquests were shipped all over the Empire and auctioned off to the highest bidder – at which point they became the property of some aristocrat or other. And those aristocrats usually had one thing on their minds when buying a young slave: sex.

See, slaves were absolutely devoid of rights in Roman law. They were part of the furniture, no better than the objects surrounding them. And just as it’s technically impossible to have an affair with your bookcase, Roman law didn’t consider slave-sex to be infidelity. So when Augustus outlawed adultery in 31BC, the horny Romans did what any sex-addict would do and started molesting their slaves at an unprecedented rate. Looks, gender and even age were no barrier: the Warren Cup, for example, is a Roman goblet dated to 5 AD that sports an image of a guy casually molesting a child. In essence, being a slave in ancient Rome basically meant being a walking sex aid – speaking of which…

If you think top shelf ‘lad’s mags’ and saucy billboards are rude, just be thankful you’re not living in Roman times. Step out of a time machine in, say, 50BC and you’d find yourself completely surrounded by penises. Literally every available surface in the Empire was imprinted with images of penises. Don’t believe me? There is a Roman coin featuring some sodomy and a statue that used to be displayed in the open, of the God Pan having sex with a goat.

Thanks to their complicated ideas of Gods and fertility, the Romans had literally no problem with the sight of one another’s wieners – and that’s just as well, really. Housewives would use tiny metal penises as wind chimes (see image), well-endowed slaves would be forced to keep theirs on show at all times; and images of the fertility God Priapus weighing his own gigantic member would appear over the entrance of houses as a form of good luck. And that’s before we even get onto the murals that filled the Public Baths, depicting all sexual couplings imaginable. But it wasn’t just frescos and statues. The Romans were also masters of…

Next time you get bored and scrawl a massive dong on the wall of a public toilet, you should know that you’re simply carrying on an ancient tradition that stretches back to Roman times. That’s right: the Romans were no more high-minded about this sort of thing than you or me. When they dug up Pompeii, one of the first things everyone clocked was the sheer amount of graffiti defacing every wall. And you better believe it was rude. One example reads:

“Weep, you girls. My penis has given you up. Now it penetrates men’s behinds. Goodbye, wondrous femininity!”

Believe it or not, that’s one of the tamer ones. There’s a fairly comprehensive list, but the best ones feature advice on oral sex, bizarre opinions on people’s privates and boasts along the lines of:

“Floronius, privileged soldier of the 7th legion, was here. The women did not know of his presence. Only six women came to know, too few for such a stallion.”

Hey, at least it makes a change from ‘Andre the Giant has a Posse’.

As you may have gathered, no aspect of Roman life was far removed from thoughts of coitus – and that included death. Unlike our sparse epitaphs, Roman men and women would include whole biographies on their tombstones, detailing every little moment of their lives. And since their lives were often pretty bawdy, that made for some X-Rated tombstones. For example, one is known to have read:

“Put on your party hats and don’t say no to sex with pretty girls, as you won’t get a chance when you’re dead.”

Wow, interesting advice, huh? Others, marking the spot where husbands have buried their wives, describe the first night of copulation – with one memorable one boasting about how the ‘wife’ was first seduced aged seven. One in particular is famous for describing in great detail a three-way relationship between two men and a woman; including complimentary passages on the woman’s nipples and how punctual she was at dealing with body hair. What a trait to be remembered for.

If you thought 50 Shades was dirty, wait till you hear about Roman literature. As with everything else in their lives, it revolved strictly round sex – and not just regular sex: weird, kinky, messy fetish sex. Take Sa tyricon, one of only two surviving Roman novels. The plot focuses on the adventures of a Roman man and his child lover as they navigate a world of orgies, flagellation and dildo-wearing priestesses. Sound a little, uh, extreme? Buddy, you ain’t seen nothing yet. The poet Juvenal routinely wrote about animal sex, violent rape and sodomy; while Martial churned out ‘epigrams’ along the line of:

“With your giant nose and cock

I bet you can with ease

When you get excited

Check the end for cheese.”

In short, their books were like their lives: rude, sex-obsessed and very-much X-Rated.

When talking about an ancient culture, it’s important to remember their standards are always going to vary wildly from ours. So when I say the Romans practiced pederasty, bear in mind that it was totally acceptable back then. It’s only when you look back on it from our own cultural standpoint that it all seems a little, well, eww.

See, in Rome, there wasn’t exactly an age of consent. If you were going to engage in a homosexual relationship with a free-born male, you had to wait until they were at least 12. But, as far as slaves were concerned, anything went – and it usually did. Aside from the Warren Cup, we have the writings of Juvenal and Quintilian; both casually informing us that schoolmasters liked to groom young boys. Then there are the numerous laws issued on the subject – preserved to this day – to stop the practice spilling over into ‘regular’ life. So pervasive, in fact, was this pederasty that Romans who didn’t fancy young boys were generally considered a little odd – a belief that only vanished when Christianity finally took hold.

Imported from Greece, the Bacchanalia were ‘fertility festivals’ that really took hold in modern South Italy. And with good reason: they were devoted almost exclusively to shagging as many people as humanly possible.

Writing about these ‘festivals’ in the Augustan era, the historian Livy breathlessly described scenes of unimaginable debauchery. These ‘festivals’ were alleged to be a place where people met, danced themselves into ecstasy, then fell into frantic copulation with no regard for who or what they might be screwing. This isn’t just Livy going on a fantasy-trip, either. By all accounts, the authorities were so troubled by the practice that they outlawed them, with punishments of severe torture imposed on anyone who continued to practice. Remember this is Rome, at the height of its decadence – so anything they want to ban as ‘immoral’ has gotta be pretty extreme. Yet, for all the threat of torture lingered over its followers, the cult of Bacchus survived for centuries – along with its pervy, orgiastic rites.

Here we get to one of the bleaker sides of Roman culture. Reading this list of debauchery, some of you may have been wondering how the Romans managed so much sex in the days before the pill. Well, according to historian Mary Beard they simply redefined the term ‘abortion’ to a terrifying degree.

And I mean terrifying. Since we now know virtually all Roman contraception methods were useless, all the unwanted pregnancies must have gone somewhere: and that somewhere was apparently the rubbish dump. No joke: there’s plenty of evidence to suggest that Roman mothers just casually tossed newborn babies away. From ancient letters advocating the practice, to clues that discarded babies may have been a major source of slaves (the popular slave name Corpeus translates as ‘found on the dung-heap’); the signs all indicate a culture totally at-home with mass infanticide. Chew on that next time someone describes our civilization as ‘violent’.

When we talk today about a ‘perversion of justice’, we mean it metaphorically. It’s a way of describing how outraged we are, how unfair the trial was. In Roman times, the phrase would have been scarily literal.

According to historian Vicki Leon, both the Romans and Greeks were fans of ‘unusual’ punishment. Not all the time, but in the case of adultery – very much so. Basically, if you were Roman and someone slept with your wife, you would be legally entitled to sodomize them in return; with an audience if you so desired.

It’s not as far-fetched as it sounds. Despite their, well, ‘love’ of boy-love, the Romans were a deeply masculine bunch. There was literally nothing more shameful for a man to do than take the ‘feminine’ role in homosexual sex – so to sodomize someone would be the ultimate act of revenge: branding them ‘unmanly’ for life. But even within the context of Roman society, this punishment sometimes took a weird turn. Apparently, it was not-unusual for the offended party to sodomize his rival with a radish, as opposed to his own equipment. Why that might be, I’ve no idea. But next time you cheat on someone, just be glad you’re not doing so in Ancient Rome. 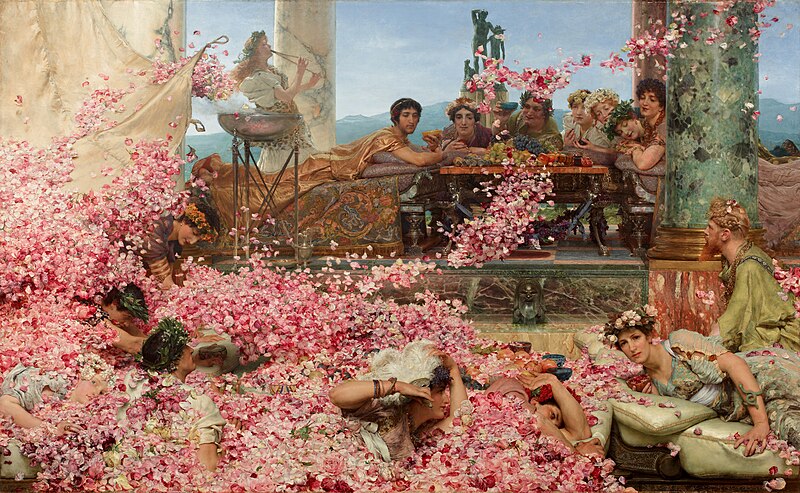 The Roses of Heliogabalus

. Almost every single Emperor to rule Rome was categorically insane – to the point that it often seems like they’re trying to outdo each other in the ‘lunatic’ stakes. Nero, for example, had his favorite boy castrated and attempted to turn him into a woman. Caligula made his horse a senator, converted the palace into a brothel and pimped out his sisters; while Elagabalus spent more time cruising Rome’s red light district dressed in drag than anything else – pausing only to invent the whoopee cushion.

Now, most of what has been written about Rome’s Emperors is probably exaggerated – Tacitus and Suetonius both liked to belittle their enemies ruthlessly – but, if even ten percent of it is true, they were some messed-up people. Perhaps it’s not surprising, then, that your average Roman was a little crazy too.