A little while ago, we explained a few reasons why Nickelback doesn’t deserve the hate they get. Since that list was so well-received, and since we hate to disappoint our fans, we thought we’d go one step further, and offer up 10 reasons you should, at the very least, give pint-size superstar Justin Bieber a break.

This article isn’t saying you have to listen to Justin Bieber’s music. We know our readers and, sadly, will likely have to hammer this point home a lot before we’re done.

10. He Actually IS Musically Talented One of the criticisms thrown at the Biebster (we can call him that, we’re homies) is that he has no talent. Go onto any YouTube video featuring virtually any band ever and you’ll see someone in the comments saying “this is real music, not like that s****y stuff Justin Bieber sings, LOL”.

However, Bieber doesn’t just have talent, he has talent for days. The young star can not only play the guitar, drums, keyboard and trumpet, he can also play a guitar like a drum, because he seemingly saw into the future and wanted to upload something to YouTube that would shut all his critics the hell up.

But hey, it’s his voice that’s annoying, right? That whiney, auto-tuned voice of his feels like someone shoved a knife made of salt into your ear, right? Well …

Listen to any one of Bieber’s songs and you’ll hear auto-tune. He’s a young guy singing pop songs aimed at teenage girls — of course there’s auto-tune involved. However, if you listen to the acoustic sets he’s done, or one of the videos of him performing before he was famous, you’ll hear that Bieber has a voice so sickly sweet you could lure bees to their death with it.

This is one of the key things people always seem to forget: Bieber wasn’t manufactured in a lab somewhere. Sure, his image was, but that’s not the issue here. He was discovered and promoted because he’s a fantastic singer. Saying he’s unable to sing just because you don’t like his songs is like saying Gordon Ramsey can’t cook because you hate lobster bisque, or that you’re creeped out because you could hide a deck of cards in his face.

“But Justin Bieber sucks at playing all of those instruments!” Really? He looks like he can play them pretty well to us. Here he is busting out a drum solo after singing and dancing for 10 minutes straight, and here he is playing a piano piece he wrote.

Which is where we expect someone will say something along the lines of “being able to play a bunch of instruments doesn’t make you talented.”

Which again, is perfectly true, but having the dedication to teach yourself to play them to a level way above that of the average person is something you have to at least admire. Then again, he has other talents.

If you still have a raging hate boner for Mr. Bieber, if you’ve already left angry comments on all the YouTube videos we’ve linked calling Bieber names and saying he plays worse than a blind monkey with seven diseases, here he is solving a Rubik’s Cube in a minute and a half.

Of course, because this is a Justin Bieber video on the Internet, the comments are all people saying that they could solve it quicker, and that Bieber is wicked slow at Rubik’s Cube. That’s pretty harsh; we’ll bet he cried in his giant mansion for days because of that. But bear in mind, this is yet another skill he possesses that 99% of the general public couldn’t emulate if asked to. And even if they could, the odds that they could also bust out a sick drum solo are so minuscule it’d rival the Like bar on one of his videos.

But hey, maybe you’re a fan of numbers; if so, you should probably know that …

Regardless of whether or not you like his music, one thing is clear; Bieber dominates the top of the charts. And here’s a fun fact: he’s the youngest solo male artist to do so in almost 50 years. The last time a male as young as Bieber made it to the top of the charts on their own was Stevie Wonder.

We’re not saying Bieber is anything like Stevie Wonder; we’re just pointing out that, at the tender age of 16, he’d already made music history by selling enough records to bury an average person’s house.

But the charts are dead, right? No one buys music anymore, it’s all about the Internet these days, Well, Bieber has that covered too because …

5. He’s Made Internet History Too

Along with having the most followers of any single person on Twitter, Justin Bieber is also one of the first artists in history to utilize the power of the Internet and social media to fan the flames of their fame. The kid has trended on Twitter almost every day for the past 3 years; Twitter actually has racks of servers dedicated solely to handling the massive traffic his tweets generate. This has resulted in Justin being considered one of the single most powerful people on the entire Internet.

Again, WE’RE NOT SAYING YOU HAVE TO LIKE MUSIC. However, if someone told you that there is a person out there able to literally make or break online careers with a single sentence, direct 5 million people to a single place on the Internet with a single word, then you’d think that person was cool as Hell. The fact that that person happens to be Justin Bieber, however, has left many people failing to see that he’s basically an Internet God. Speaking of which …

4. He’s Famous Because Of God 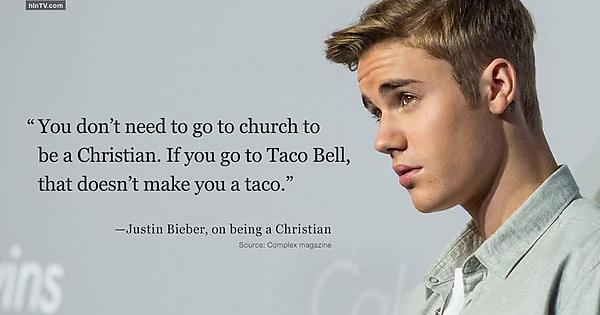 You may or may not know (depending on how much JB you love in your life,) that Biebz is a devout Christian. As is his family. When the young star was first discovered, his mother was initially hesitant to trust the well-being of her son to a Jew. Hey, it happens.

However, when she went and prayed, and asked the members of her church for advice, they told her to go for it, thus kick-starting young Justin’s career. So yeah, don’t be angry at record companies for plaguing you with Justin’s soulful melodies and slick beats, be angry at God. Unless you don’t believe in him — then be angry at everything.

A lot of flak is aimed at Justin for his prima donna attitude, and how he acts like a spoiled petulant child, because obviously all of us would be paragons of virtue and civility if we became multi-millionaires fresh out of high-school.

Yet, in interviews and cases where he’s able to actually meet one-on-one with fans, Jezza is perhaps one of the nicest people you could ever hope to meet. Here he is offering some kind words (and a fat stack of cash) to a little girl busking where he used to perform. Here he is paying for a victim of bullying to visit him on his own dime. Finally, here he is handing out free tickets to one of his shows to his fans.

Now just for a second imagine being Justin Bieber. Imagine if literally everywhere you went, you were being constantly hounded by the press and fans (Justin has been chased by his fans in boats before. BOATS!) and that you were being sent millions of messages a day through every piece of social media you had access to. How long would it take for you to stop answering your messages, signing autographs and posing with people screaming through tears that they love you? If it’s less than four years, you’re a way worse person than Bieber. We’re just going to go out on a limb and say that anyone who can put up with screaming teenagers everywhere they go and only punches a guy with a camera is a borderline saint. Speaking of which…

2. Charity. Lots And Lots Of Charity

The list of charities Justin supports reads like a Who’s Who of the worst things to ever plague mankind. Alzheimer’s, world hunger, support for bullied LBGT teens: Bieber supports them all.

This is in between sold-out concerts, meeting with fans, and his own life. Half of the people reading this would struggle supporting two pet dogs, let alone the weight of 30 million fans, a busy schedule, and dozens of charity events. Damn, this kid must never have time for anything else. Oh wait … The pocket-sized teen has played a number of pranks on his fans over the years, but we’d like to share just one of them and we feel safe saying that this is perhaps one of the greatest things ever done by a celebrity.

We also feel it’s safe to say that most people reading this hates the celebrity-stalking website TMZ more than they hate Justin Bieber, because at least Bieber only takes photos of himself with his shirt off. So, Justin Bieber annoying and wasting TMZ’s time should at least make you smirk.

On April 1st, 2013, Bieber decided that he’d had just about enough of TMZ, so he posted the number for their tip line as his own number on Twitter, inviting his fans to call it for a chance to speak to him. TMZ’s phones went mental, completely shutting down their office for hours. In retaliation, TMZ posted Justin’s manager’s personal cell phone number to their Twitter account . Because that was totally the same as Justin posting a number they openly advertise and invite people to call on their own website.

So yeah, we’re not saying you have to like Justin Bieber. But you should probably hate TMZ more.

Karl is in charge of updating a new section of TopTenz, every day he’ll be updating it with a new awesome fact or story from the news, history or pop culture. Check it out here.