Here at TopTenz, we love lists about single human beings. Whether it’s all the badass stuff Danny Trejo has said in interviews, or the best tweets ever sent out by The Rock, we love that stuff and, looking at our views, you do too. So today, we’re here to list why Jack LaLanne, the godfather of fitness, was probably superhuman.

10. He Beat Arnold Schwarzenegger, in His Prime, at Age 54 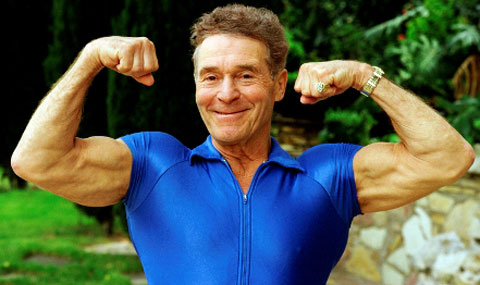 One thing you should know about Jack LaLanne is that from about the age of 16 until the day he died at age 96, he was in almost perfect physical condition, and that even his tears fell in the shape of tiny fists. Perhaps the best example of LaLanne’s astonishing physical prowess was the first time Arnold Schwarzenegger

met him at the tender age of 21. Now at this point in his life, Schwarzenegger had just become the youngest Mr. Universe in history, and was in possession of a set of arm that scientists are still trying to classify as planets. Upon seeing the 54-year-old LaLanne doing approximately infinite press-ups, Schwarzenegger got a little competitive and challenged him.

Lalanne utterly trounced Schwarzenegger, a man 33 years his junior, without even breaking a sweat in both push-ups and chin-ups. You know, the things he’d been doing for like an hour before Schwarzenegger had even arrived. When asked to describe LaLanne, Arnold “Bison Arms” Schwarzenegger simply responded “That Jack LaLanne’s an animal,” presumably before LaLanne assumed his beast form and drank a gallon of blended titanium. Speaking of blending …

9. Even His Juicer Could Kick Your Ass

Along with being a fitness advocate and all-around nice guy, LaLanne was also a salesmen, and one of the products he came to be synonymous with was the juicer. LaLanne put his name on several juicers, a device he swore by as a great way of easily consuming multiple pieces of fruit and vegetables at once. The one we’re here to talk about today though is the brilliantly named Juice Tiger, a juicer so powerful it injured people.

You may be wondering why this make LaLanne superhuman. Well, LaLanne swore by his own products, and it’s only reasonable to assume he made extensive use of the Juice Tiger, a device that would later be recalled because it was so metal it exploded and injured people. Just think about that for a second; one of the few products Jack LaLanne ever put his name on was so stupidly strong, normal human hands risked being cut to pieces by it.

8. He Carried a Football Player up a Sand Dune 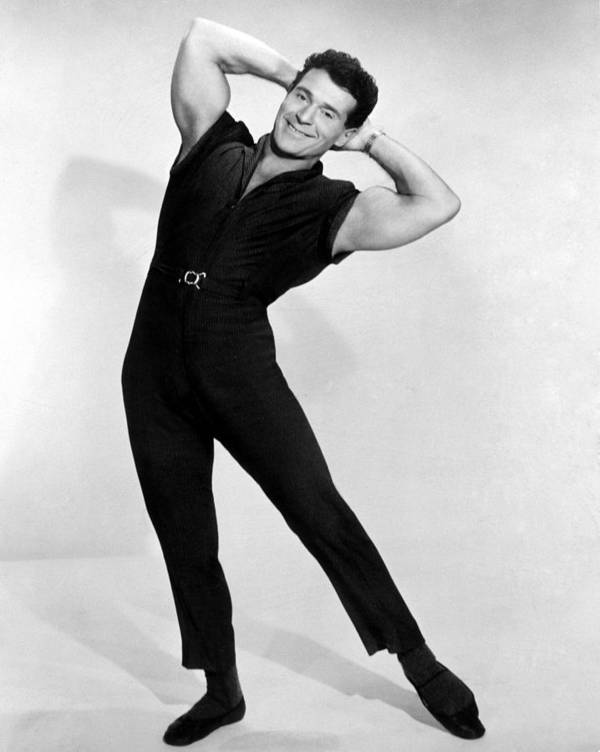 If you’ve ever seen an NFL player, you’ve probably noticed that they’re shaped like fridges, usually stand in excess of 6 feet tall, and more often than not weigh over 300 pounds.

Keep that in mind as we tell you that, when Jack was asked to train the University of California football team, he took the entire team to a group of sand dunes. When asked what they were doing there, LaLanne picked up the biggest player there, ran up and down every dune in the area and told the rest of the team to do the same. By the end of the day, every player had nearly coughed up their own lung. LaLanne, on the other hand, simply laughed and called it a light workout. We’re not even kidding. Jesus, what did this guy call a heavy workout?

7. He Worked Out More than the Average American Does in a Week, Every Morning. At Age 90 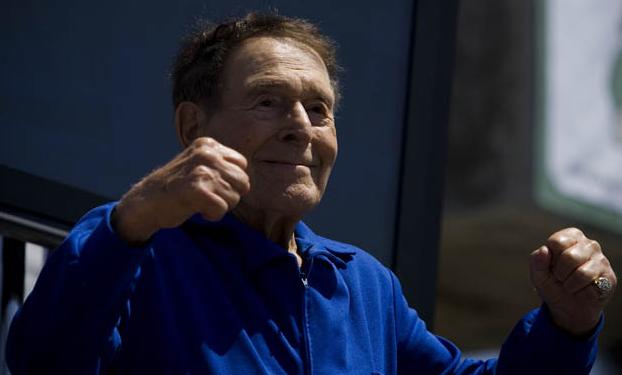 Realistically, you should exercise for around half an hour a day, every day. However, according to government figures, the vast majority of Americans fail to reach even that minimum, on average only engaging in around 2 hours of strenuous exercise a week, or a little over 17 minutes a day.

What most Americans barely manage in a week, LaLanne did every day before most people start work, AT AGE 90! Jack’s morning routine (literally up until the day he died) involved 2 hours of swimming and training starting at 5 AM, followed by breakfast and whatever the hell else Jack felt like doing. In fact, just after his death, his family revealed that he was up and exercising the day before he dropped dead. At age 96. Just soak that in — Jack LaLanne exercised more on the day before he died than the average American will manage in a week.

6. He Escaped From Alcatraz Without Them Knowing

One of the Jack’s more memorable feats was the time he swam the distance from Alcatraz Island to the shore, while handcuffed and dragging a 1000-pound boat. At age 60. However, few sources bother to mention that Jack accomplished the same feat 19 years earlier without dragging a boat. Obviously, a 60-year-old dragging a boat is way more impressive than a 40-year-old not dragging a boat, so it’s understandable that the former feat is the one people mention.

However, the first time Jack did it, it had both never been attempted before and, despite the fanfare, no one in Alcatraz even knew that he did it. He just got on a boat, went to Alcatraz, and swam across the ocean while Alcatraz was still open! It’s almost as if he knew his future self would try to top his own feat. That’s right — Jack LaLanne was so fit the only person that could compete with him was himself, 20 years in the future. As mentioned above, Jack was in great shape throughout his 90’s, but we haven’t yet stressed exactly how great. Jack wasn’t just an active senior citizen; he was still able to do things at 90 most people couldn’t do in their prime.

For example, while on a plane with the then-Governor of California, Arnold Schwarzenegger, LaLanne once again made Conan the Barbarian blush, when he expressed that the plane journey was making him feel stiff. Before anyone could say anything, LaLanne then extended his leg to the roof of the plane, stunning Schwarzenegger into silence and ensuring that he knew his place.

LaLanne wasn’t doing this to show off, he just felt like he needed to stretch and decided that the best way to do so was for him to raise his leg six feet into the air and kick the roof of the Terminator’s private plane. Besides, he already did enough showing off in his youth, like when …

LaLanne was a push-up God, and could easily pump out hundreds on command. When challenged to show someone exactly how many he could do, LaLanne proceeded to break the world record, on television, by doing 1,033 in 23 minutes. That’s one push up per second for almost half an hour straight. Seriously, try and do that for one minute and see how hard it is.

When asked to do it again so scientists could harvest his sweat to make shark repellent, he one-upped his only worthy competition (himself,) and did 1,000 push-ups followed immediately by 1,000 chin-ups, in just over an hour. Rumor has it the spot he did it on is still moving up and down to this day.

3. He Greeted People by Asking Them to Punch Him Along with retaining the flexibility of an Olympic gymnast well into his golden years, LaLanne was also in possession of a set of rock hard, if slightly sagging arms, legs and abs. Knowing people wouldn’t believe him, LaLanne would ask everyone he met to punch him directly in the stomach as hard as they could to prove it. Oh, and he did this when he was 88.

What’s even more impressive is that LaLanne knew how old and decrepit he looked and he’d play on it to no end. Upon meeting new people, LaLanne would “pretend” to be just an average old man with old man problems, aches and pains. When the stranger was fully convinced that the 90-year-old man in front of them was a typical 90-year-old man, LaLanne would then scare the crap out of them by jumping around like a far more buff version of Gene Wilder in Charlie and the Chocolate Factory.

2. He Was Mobbed by Women Everywhere He Went

In his prime Jack LaLanne, was a very handsome man; the only reason there aren’t statues of him everywhere you look is because the only material hard enough to model his abs is usually found on tanks. However, unlike with virtually every other person on Earth, LaLanne’s handsomeness didn’t fade with age. In fact, women found him more attractive as the years went on. As this source points out, at 71 years of age it took Jack 10 minutes to walk no more than 25 yards, simply due to the volume of beautiful women clambering to get a picture with him. Let’s all be honest here — if you were given a choice between being as strong as Jack LaLanne in his prime, or having his ability to attract dozens of beautiful women at 70 years of age, which power would you prefer?

1. He Trained the Police Fun fact: when Jack first started touting the benefits of exercise, everyone was against him up to and including doctors, who claimed Jack’s exercise routines would give you ass legions instead of sculpted arms and the ability to punch the Grim Reaper. In fact, opposition to Jack methods was so severe (regardless of how ridiculously in shape he was to prove that they worked) people had to train with him in secret like he was Batman or something.

That’s not a comparison we make lightly either, as it wasn’t uncommon for police officers and fire fighters wanting to pass their physicals to secretly ask Jack for help and work out with him in the gym he made in his backyard.

If secretly training the next generation of crime fighters to be more able to whup ass in a home-made training area doesn’t prove Jack LaLanne was some sort of superhero, we honestly don’t know what else could. Well, except for all those times he pulled boats with his teeth, we guess.