Top 10 TV Shows That Ripped Off Other TV Shows

Originality in Hollywood is, for all intents and purposes, dead. There’s no getting around it. After all, there are only so many types of stories that can be told. That’s why you see so many sequels and reboots, and even some movies released at the same time, featuring eerily similar plotlines. Who can forget the Volcano/Dante’s Peak catastrophe of 1997, which costs hundreds of lives and millions of taxpayer dollars?

Well, ripping off older ideas isn’t just limited to movies. In fact, it’s probably far more common in television than you might expect. Here are the top 10 shows that totally ripped off other shows.

10. The Honeymooners vs. The Flintstones

This may be the most blatant rip-off on the entire list, considering every character in The Flintstones is modeled after, and sounds just like, the characters on the classic sitcom The Honeymooners. So why isn’t it higher up on the list? Because it’s really an affectionate rip off, and not out-and-out thievery. Plus, you have to give The Flintstones credit for giving the show just enough differences to stand on its own. Of course, who can honestly say that The Honeymooners wouldn’t have been vastly improved if every episode started with Jackie Gleason sliding down a dinosaur’s

It’s tough to say that any show based on Sherlock Holmes can really be a rip-off, considering the source material has been around for ages and there have been numerous incarnations throughout the years. Heck, even House is supposedly based on the Holmes character. But what makes the production of the new hit show Elementary so fishy, is the timing. See, there’s a show on the BBC called Sherlock, which is absolutely brilliant and has been generating a ton of buzz in America. CBS had previously met with the creator of Sherlock about adapting the show for an American audience, only for those talks to go nowhere. They then turned around, and produced a contemporary Sherlock Holmes show without him, and this one’s got thievery written all over it.

8. Psych vs. The Mentalist 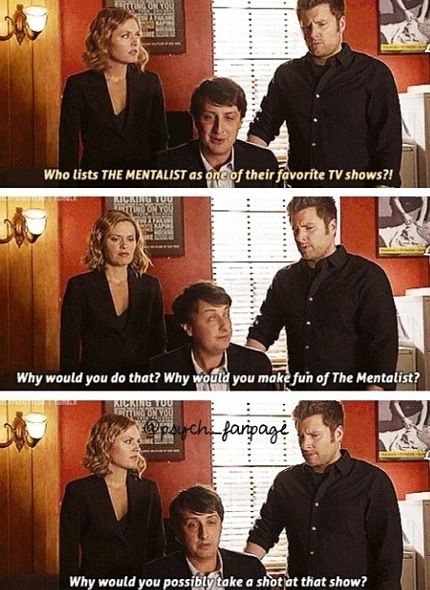 Psych debuted in 2006 on the USA Network, and has steadily become a backbone of their original programming. It’s about a guy with the uncanny ability to notice the smallest details, allowing him to solve crimes no one else can. Oh, and he pretends to be psychic when the police start to suspect he must be the culprit when he solves a particular crime that he should have no business being able to solve. The Mentalist first hit the air in 2008, and follows a former “psychic” who uses his powers of observation to help solve crimes. Yeah, it’s basically a carbon copy, only Psych is decidedly hilarious. It’s gotten to the point where Psych pokes fun at The Mentalist once in awhile, as when the protagonist casually mentions he’s going home to watch a Mentalist marathon.

7. The Simpsons vs. Family Guy

Now here is one rip-off that we know people are going to get a bit up in arms about, considering Family Guy has gained a rather huge cult following, while support for The Simpsons, while still strong, has dwindled considerably over the years. However, there’s no questioning that, while Family Guy may not be a direct rip-off, it’s clearly been strongly influenced by the greatest animated sitcom of all time. Seth MacFarlane isn’t exactly averse to ripping off ideas, especially from himself. Both MacFarlane and Simpsons creator Matt Groening have publicly admitted there’s been a bit of a rivalry between the two shows, stemming from the fact that Family Guy has an awful lot of similarities to The Simpsons. We’re sad to tell you that, unfortunately, it’s mostly a friendly rivalry. And here we were, hoping for bloodshed.

Big Brother is the devil. We just thought we’d get that out of the way right now, because it needs to be said. While some reality shows provide exotic locations to look at or people who have some actual talent, Big Brother is a show that throws caution to the wind and exists exclusively as an excuse to put pretty, obnoxious attention-seekers in a house and have them do asinine things. Somehow this show has lasted since 1999, when it debuted in the Netherlands and was then brought to places like the UK and the US.

Yet despite being such an awful, awful abomination of a television program, ABC decided to rip it off and create Glass House, which is basically the exact same thing, to the point where CBS filed a lawsuit against ABC in May. This has some credence, considering that 19 people working on Glass House used to work on Big Brother.

5. The Amazing Race vs. Expedition: Impossible

The Amazing Race is generally regarded as one of the greatest reality competition shows ever created. If you’ve never watched it, it involves teams of ordinary people in a race around the world, which plays out sort of like a global scavenger hunt, with obstacles and challenges thrown in along the way. It’s been so successful that, in 2011, Survivor mastermind Mark Burnett chose to borrow the general concept for his show, Expedition: Impossible. In that show, teams of ordinary people race and try to complete several stages in exotic locations and cross the finish line first. Of course, the entire show took place in Morocco, so that takes out the continent-hopping fun of The Amazing Race. Considering Burnett himself has been ripped off numerous times, we suppose it’s only fair he get to engage in thievery once in awhile too.

4. Pop/American Idol vs. The X-Factor

Pop Idol debuted in the UK back in 2001 and, shortly after, it was brought to the States as, of course, American Idol. It quickly became a juggernaut, both in terms of ratings and revenue. Pop Idol fizzled out in the UK, and The X-Factor was originally designed to be its replacement. Of course, the similarities were so striking that eventually Idol creator Simon Fuller filed a lawsuit against Simon Cowell in 2004, which was settled when Fuller was given an executive producer credit for X-Factor, and the show was not allowed to be brought to America until 2010. If Simon Fuller truly cared about his audience though, he would have spared us from having to witness The X-Factor at all. When he’s not swearing at overwhelmed chefs, Gordon Ramsay likes to fix up failing restaurants. In fact, he’s been doing it since 2004, when Ramsay’s Kitchen Nightmares debuted on the BBC, and then was later brought to America as simply Kitchen Nightmares. Every episode is basically the same: he berates incompetent owners and cooks, finds disgusting kitchens, and eats horrible food, only to magically turn things around in a matter of days. It’s an idea that works so well that another British chef, Robert Irvine, chose to take it for himself with the Food Network show Restaurant: Impossible. On that show, Irvine bails out failing restaurants after eating horrible food, finding gross kitchens and meeting incompetent owners and cooks. Of course, he yells a lot less, and works on a budget of $10,000 so it’s, you know, totally different. Though we’re starting to think the creator of Mission: Impossible should look into trademarking the whole Noun: Impossible title trope that appears to be everywhere lately. 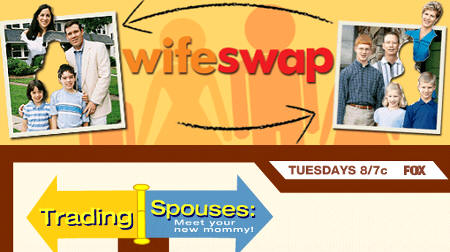 While Trading Spouses is technically ripping off Wife Swap here, considering Swap got on the air first, we could just as easily point out that both shows are blatant rip-offs of an idea from another show. That show, of course, was Chappelle’s Show. The difference here is that Trading Spouses and Wife Swap are treated seriously, while the sketch in Chappelle’s Show was obviously making fun of reality programming. So basically, not one, but two people sat down and watched Chappelle’s Show, saw that sketch, and thought it would actually be a good idea. And the best part: Trading Spouses even swiped the name of the fake reality show in the sketch.

1. Flip That House vs. Flip This House

Seriously, just look at those names. House-flipping became all the rage back in 2005 because, within a 10-day window, both Flip That House and Flip This House were released and began tricking poor suckers at home into thinking that, if they buy crappy old homes and put a ton of work and money into them, they’ll become millionaires. Because, you know, that’s something everyone can do so easily. Anyway, while these shows were obviously in production at the same time, we’re going to say that Flip This House is the thief here, since Flip That House beat it to the air by a little more than a week.