“What will the world will be like in 1,000 years” seems like an absurd question to even ask, especially since the degree to which the world changes in 100 years is overly ambitious enough to consider.  Yet curious people do wonder, and certain people like Ray Kurzweil (thought by many to be the Thomas Edison of today) spend all their time working to find the answers.

In honor of our 1,000th Toptenz article, Ray is going to take the podium to share with us some of his ideas about the future.  According to Ray, some of the same people living today will still be around in 1,000 years!  Technological visionary, leading inventor of our time, the recipient of the National Medal of Technology, inductee into the National Inventor’s Hall of Fame, and the recipient of 19 Doctorates and Honors from 3 U.S. Presidents, Ray gives us the top ten reasons to look ahead. Contact with other species, other civilizations?  With technological advancements looming large in the distance, a future with aliens

may in fact be on the horizon.  Ray believes that advancements in technology will soon enable us to travel farther and longer into space, where we may encounter other planets and other life.

According to Arthur C. Clarke, another futurist, inventor, and science-fiction writer, technology is advanced enough already for us to make contact with aliens.  To our good humor, some people already believe they have come in contact with alien life, and television shows like “Alien Hunters” and the like are around to prove it.  Ray, more of a humanist than an alien hunter, focuses more on technology and of the progress of humankind and our current world, which takes us to our next topic – the future of the Earth itself.

When people think of the future, they tend to think of the planet Earth, and the mark we are leaving on its oceans and forests, and the havoc we have brought to it.  Which lands will be swallowed up by rising sea levels?  About climate changes: how to support a rapidly growing population in respect to food, fuel and natural resources?

Many pessimists foresee the worst (many doubt we will even survive another 1,000 years).  Material greed is swallowing up the Earth’s resources faster than it can replenish itself.  The future, in this vein, sounds rather dark, but Ray believes technology is going to help solve many environmental problems.

Still, who can stop asteroids and comets from colliding with the Earth?  Who can keep it from spinning off its axis like a marble shot out of bounds on the play yard?  And what about exploding stars in space shooting out bursts of gamma-rays stronger than millions of atomic bombs in far-away galaxies, with power strong enough to obliterate everything within millions of light years?  What kind of future exists for the Earth then?  According to Ray, much more interesting things, and less destructive possibilities, are on the horizon.

8.  Solutions To Energy And Environmental Concerns?

Ray believes that environmental and energy concerns can, and will, be solved with technological solutions in the future.  He claims that that the Earth will not turn into a polluted, over-crowded, tumultuous wasteland, but instead believes that nanotechnology will be capable of cleaning up environmental damage, meet our energy needs, purify water and air, and capture the energy of the Sun through solar panels and more.

He believes that we will meet our projected energy needs by 2030, with the development of these new technologies.  Will his overly-positive predictions win out to restore the planet Earth, or will the technology only be more waste to add to the heap?  Certainly the next 1,000 years will reveal the correct answers to Ray’s claims, either about our resourcefulness or about our inability to solve the problems we have created.

1,000 years from now, the world population is estimated to be roughly 14 billion.  Although such predictions are unlikely to be accurate, the concern is real, and more and more people are working fast and hard for solutions.  Will engineered food solve hunger and meet with growing food needs, or will it prove to be harmful to our health and environment in the end?

According to Ray, one day we will take in our nutrition like plants take in the sun, and as technology grows more advanced, our dependence on the Earth’s resources with become less and less.  Sounds like something straight out of a science fiction book, only better, if it proves to be true.

6.  Technology Of The Future

Ray calls it “the singularity,” a time when technology itself will merge with those creating it.  From devices in our eyeglasses and contact lenses, to displays being written directly into our retinas, emergent technology will not only change us, but will change everything.  There will be a time when we can use space itself to generate energy.

By changing our DNA, Ray believes that farther and farther space travel will be possible.  Sound like a technological utopia?  Certainly.  Taking it a step further, the technology we are currently creating will soon grow more intelligent than we are.  What to do then?  Simple: merge with that technology in order to compete.  Due to our slower evolutionary processes, only by doing this will we be able to survive against the uprising of future intelligent machines.  One day soon, Ray says, you will not be able to tell the difference between human and artificial intelligence.  This brings us to the next section on our list: intelligent machines. 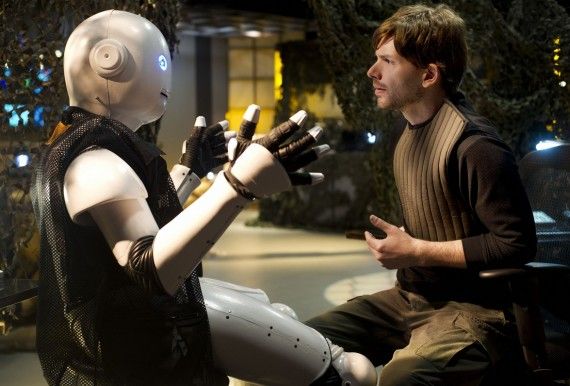 The emergence of intelligent machines, Ray believes, will quantify in the future as another species, regardless of whether we encounter life outside of our solar system or not.  He believes we will be sharing our planet with robots, who will soon surpass our own intelligence, and only by becoming like the technology we create, will we be able to compete with those intelligent machines.  Ray says “the result will be an intimate merger between the technology-creating species and the technological evolutionary process it spawned.”

Humanity has not kept its feet on the ground and, whether it be to the limits of the Earth or our own biology, we are always on a quest to discover and explore our world, and the space beyond it.  In 1,000 years, just how far will we have gone?  According to Ray, we will have mapped out much more of the the cosmos.  We will be able to foretell future cosmological occurrences that can affect the Earth, and the repercussions that any those events could incur for humankind.

The biggest reason for space exploration, however, is not only to discover how the universe works, but to scout out new and interesting planets that have the potential to support human life, should unfavorable conditions appear.  So far, possible planets to live on that we have discovered are too far out of our reach, which brings us to our next section on the list.

3.  The Future Of Space Travel

Futurist Arthur C. Clarke, considered a visionary about space travel, believes it is only a matter of time before we have safe and economical space propulsion systems.  The questions, however, are not just in building that technology and making it affordable, but to change ourselves to withstand the negative effects that space travel has on the human body.  Ray believes that we will soon be able to alter our own DNA with emerging technology in order to withstand space travel, as DNA does not fare well in space. By doing so, we will be able to take farther and farther journeys out into space.

Of all that has been listed, number two probably has the most evidence to support it, specifically in recent years. Gerontologists and scientists are finding more and more evidence that the aging process can be slowed down.  Ray speaks extensively on how nanotechnology and nano-bots will slow the aging process, by travelling into the bloodstream to destroy pathogens, reverse the aging process, and correct DNA errors.  To add to that, Ray even talks about downloading the mind into another carrier, which is easily the most unlikely, but most thought-provoking, idea that Ray has introduced yet.

1.  Future Visions Of The Obliteration Of Death

If stopping the aging process wasn’t enough to shock you, try taking it even farther by saying that future technologies will stop aging completely, one day making death obsolete.  Ray believes that, one day, humans will live forever.  He refutes the idea that “the purpose of life is to accept death,” that “death always means a profound loss in relationships, talent and potential, but that up until now we have had no choice but to rationalize it.”

In Ray’s earlier book, “Fantastic Voyage:  Live Long Enough to Live Forever,” Ray writes about how people can start taking steps now to extend their lives, until the advancements in medical technology have a chance to catch up.  Nanotechnology will develop over time, becoming more capable to repair and restore our body parts.  Biotechnology is advancing and will soon make it possible to turn on and off enzymes, the workhorses of biology.  Current medical technology is taking its first steps in using these techniques to destroy HDL in the blood to stop atherosclerosis, as well as many other diseases.  By creating ever-increasingly powerful technology, the future means extending human life.  Life expectancy grows longer and longer every year: where life expectancy was 37 years in the 1800’s, a thousand years from now, according to Ray, it may just be infinite!

Technology merging with biology? There is no doubt you will peruse our Top Ten list with all kinds of skepticism, and you certainly should be; these are perhaps some of the most radical ideas about the future yet.  Still, for someone like Ray Kurzweil, who has accomplished great feats within his lifetime, is there some value in even considering it?  Whether you are a believer in science, futurists, or in prophets, or merely in the “little things,” certainly these visions of the future are big enough to color your imagination, and light up a place where space, time and possibility surrounds us all on every side.