Hollywood strives to make movies look as real as possible: after all, The Matrix wouldn’t have been nearly as convincing if it’d been filmed in some guy’s basement. To make that magic, sets are often elaborately and solidly built. So elaborately and solidly, in fact, that after filming is over, those sets keep being used, even when it’s no longer for the movies. 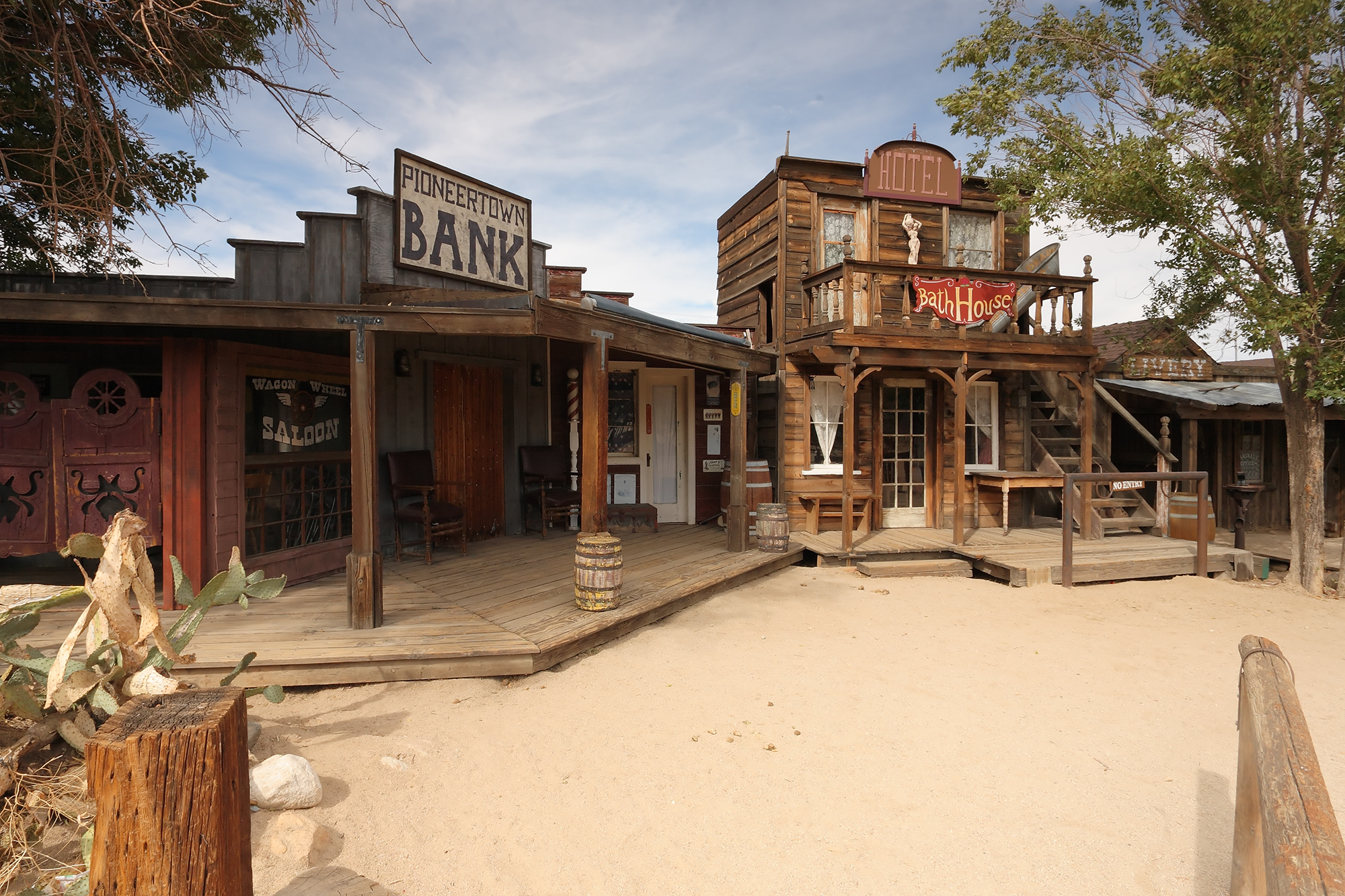 Mane Street (Really. That’s not a typo) of Pioneertown was built in the 1940’s, as a location for Westerns like Cisco Kid and The Gene Autry Show. Although it was a movie set, all the buildings were real, not just false fronts, so after the Western craze went boots up, regular folks moved in. In 1972, the building that had been “The Cantina” in various shows and movies became an outlaw biker bar that served burritos. In 1982 the biker bar was reopened as Pappy and Harriet’s Pioneertown Palace, and is still there today, as is the rest of Pioneertown. In fact, if you’d like to own a part of Mane Street, like the Likker Barn, check the real estate listings…they’re often for sale.

When filming on 1983’s A Christmas Story ended, Ralphie’s house gave up the glamorous Hollywood lifestyle, and went back to being a house. Like other ordinary houses, it was eventually renovated until it looked nothing like it had in the movie. In 2004, Brian Jones, whose job was making and selling replica Christmas Story leg lamps, bought it on eBay. Jones re-renovated the house back to its movie glory, going frame-by-frame to make sure it was exact. Today it’s open to visitors, and Jones also bought a house across the street and turned it into a museum. A Christmas Story museum, naturally.

What do you do with a stage set after Gwyneth Paltrow is no longer prancing around on it? You give the whole thing to Judi Dench, apparently. Dench kept the Rose Theater set from 1998’s Shakespeare in Love in storage until 2009, when she donated it to the British Shakespeare Company. The Company announced plans to use the set as a stage in a Shakespeare center, but nothing’s been done with it yet: in 2010 the Chester Chronicle reported that the city’s attempt to bring the theater there had failed. The replica of the Alamo at Alamo Village located north of Brackettville, Texas, United States.

Never one to skimp on details, John Wayne had a full-scale, working reproduction of the Alamo built for his 1960 film about, of course, the Alamo. The set was used as a location for other films until 1971, when it was sold back to the original owner of the land. John Wayne’s Alamo Village then became a tourist attraction, with a John Wayne Museum, trail rides, and gunfight reenactments, until the owner died and it closed to the public in 2009.

Westerns like Bonanza and The Lone Ranger were filmed at the Spahn Movie Ranch from the 1940’s-60’s. In 1968, the ranch’s elderly owner let Charles Manson and his “family” stay there as they prepared for Manson’s “revolution.” They were living on the ranch at the time of the Tate-La Bianca murders, and Manson was arrested there in 1969. The buildings burned down in 1970, no doubt as some kind of heavenly judgment, and today the land is part of the Santa Susana Pass State Park.

1948’s Mr. Blandings Builds His Dream House starred Cary Grant and Myrna Loy as a couple who buy a fixer-upper, with hilarity ensuing. RKO Pictures built the house on one of its lots; in 1974, the land became part of the Malibu Creek State Park, and today the Blandings’ house holds the administrative offices for the park system. But that’s not all: as promotion for the film, RKO built replicas of the house in 73 cities, and many of them are still around, including one in Toledo.

Old Tucson Studios was built in 1939 for — you guessed it — Westerns, and more than 300 movie and TV shows were filmed there. Unlike the former Western sets on this list, it’s still a working studio; it was used as a feature film location as recently in January 2013. Westerns don’t pay the bills like they used to, though, so in 1960 Old Tucson was converted to an Old West tourist attraction. Visitors tour the museum, watch gunfight reenactments and saloon girl shows, ride a horse or a train, and pan for gold.

After Universal Studios built a baseball diamond in a cornfield for 1989’s Field of Dreams, movie fans started to visit. The land’s owners kept the diamond and welcomed tourists, as many as 65,000 a year, and never charged admission.  In 2013, they sold the property for $3.4 million to a Chicago investment group, which plans to build 24 baseball/softball fields on the property.

Tunisia stood in for the planet of Tatooine for four of the Star Wars movies, and many of the sets remain intact. Enterprising locals have moved into the Phantom Menace’s Mos Espa’s spaceport buildings, and travelers can stay at the Hotel Sidi Driss, which served as Luke’s homestead in the original Star Wars.

Director Peter Jackson gave the Hobbiton set from (appropriately) The Hobbit to New Zealand as a permanent tourist attraction, and it was completely rebuilt in the town of Matamata. Tour companies offer day trips where you can visit Sam or Bilbo’s houses, provided they’re not being used for filming. Tourists can even enjoy a complimentary refreshment at the Green Dragon Inn, and you can rent the thing if you’d like to recreate Bilbo’s birthday party.