It is not the intention of anyone here at TopTenz to insult the diverse fashion sensibilities of other countries. We believe it’s up to individual nations, regions and groups of people to decide what exactly constitutes “fashion” and no one answer could ever be the “correct” one. However, that being said, you at least have to admit that wearing shirts with a cartoon Hitler on them and tattooing your eyes can and should be considered banana-split levels of uncut crazy. Read on to find out more about those and other weirdest fashion trends from all over the globe. Earlier this year, the city of Bangkok has been invaded by Hitler. If you’re wondering why you haven’t heard anything about that, it’s because this invasion has been into the world of fashion.

Nowadays, Bangkok is said to be experiencing a veritable Hitler-mania, with the image of the infamous German leader appearing in cartoon form, on T-shirts, sweatshirts, posters, you name it. Ronald McDonald? Yes, Bangkok has a Hitler version of him in as well, together with Hitlerized pandas and even the Teletubbies.

Foreign correspondents explain that this modern trend can mostly be chalked up to ignorance rather than underlying fascist tendencies of the young people of Thailand, no different than the treasure trove of ethnic and homophobic slurs that is a typical internet message board here in the West. It appears that no matter where you go, kids are just always going to be stupid, and while we’re on the topic…

At the risk of generalizing, heavy metal has usually had problems with attracting audience members of African descent. Lately though, classic, old-school metal fashion—of the leather and chains variety—has dominated the counter-culture movement in the Southern African nation of Botswana.

Walking down the street in big cities and small villages, the Botswanian metalheads, clad in an entire cow’s worth of black leather, create a peculiar sight in the country known primarily for its wildlife parks. To them—as the Southern African metal warriors explain—metal music and the culture surrounding it is all about power, strength and freedom, which means that they thankfully haven’t discovered Korn yet. It’s also why many of them give themselves nicknames like Demon or Gunsmoke… well, THAT and no one ever having the guts to call them out on it. 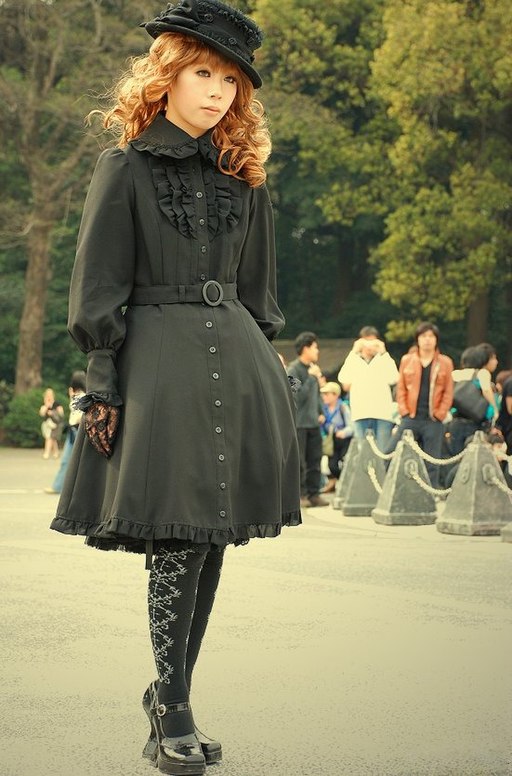 Not to be confused with the Western meaning of the term, the Japanese “Lolita” is an extremely broad fashion subculture that emphasizes cute and stylish Victorian-era clothes. It’s “Gothic” sub-style, probably the most famous of the group, is in turn all about darker, gothic aesthetics which in the hands of misinformed Japanese teens basically boils down to “faux-vampire fashion as understood by a 15-year-old.” Also: “umbrellas.” As in, every other picture of a Gothic Lolita on GIS shows them holding an umbrella because without one they would all apparently look silly.

Pointy, long and kind of silly-looking – those are not just the words used to describe Ron Jeremy’s private parts, but also the details of the new shoe craze sweeping Mexico. For unknown reasons, cowboy boots with elongated tips (sometimes fashioned from old garden hoses) have become the go-to fashion statement for young people south of the border. Why do they do it? It might very well be a classic sign of “peacocking” where males wear distinctive clothing to get the attention of the ladies and it’s nice to see that the end result looks equally ridiculous there as it does in the United States. (For more information, Google “Mystery,” and then laugh for 5 minutes straight.)

From: All over the world

The question of whether the popular female leggings can successfully be worn in lieu of pants is still a hot button issue among many women but I believe we may have finally found and answer to that in the form of meggings – the male equivalent of leggings. And that answer is “For the love of God, put some pants on.”

There really only are a few reasons for why a man should stuff himself (and consequently, his junk) into skin-tight, form-fitting clothing as thick as a pair of silk panties, and they are: He’s in amazing shape or he’s a professional dancer/stripper, which you will notice describes less than 0.1% of the entire male population. And do we really need another piece of clothing specifically for good-looking people? We already have the entire fashion industry for that.

You know what body part often gets overlooked in the world of fashion? The eyes. Sure, you can paint around them or change their color with contact lenses, etc., but how often do you see some actual, serious fashion being done on the eye itself? Almost never, because that is a terrible, terrible idea. Well, the Dutch seem to disagree.

A new technique that allows small studs made from precious metals to be inserted into the eye was developed more than 8 years ago in Rotterdam, giving teenage girls everywhere an alternative to dating black guys to anger their parents. The Dutch claim that the procedure is perfectly harmless, while eye specialists argue that it is insane; also: potentially dangerous. But, come on, what is a little eye bleeding or risk of impaired vision when you get to wear a tiny, near-invisible heart or half moon in your peeper? Don’t answer that. But while we’re on the topic of eye-related horrible ideas… 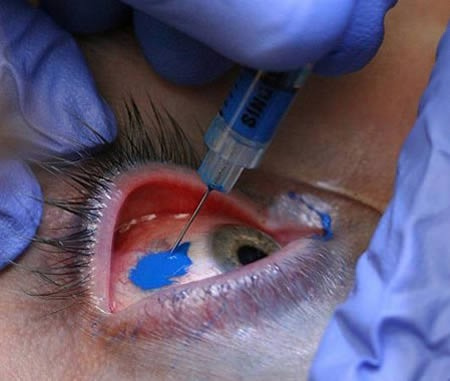 In all fairness, tattooing the cornea has been around for thousands of years and has valid, medical applications, specifically for people with scarred eye tissue. But the white stuff of the eye, the sclera? Inserting dye/ink into that for kicks and giggles is a relatively new thing which is good because I hate to think that the human race has always been this fruity looped. 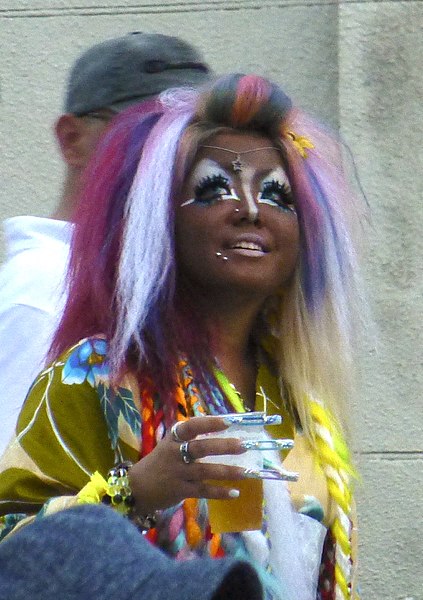 Oh Japan, why do you keep appearing on lists with “Weirdest” in the title…?

Manba is a fashion trend popular among young Japanese girls who apparently date men with a Minstrel Show fetish. Manba is a variation of the popular Ganguro subculture that basically emphasizes dark skin and heavy makeup, which stand in opposition to the classical Japanese aesthetics of beauty. Manba then takes that idea and cranks it up to 11, ironically ending up looking a million times sillier than Spinal Tap.

Manba girls usually paint their entire faces a deep, dark brown with two islands of white around their eyes to go with their silver blonde-dyed hair, pastel makeup and dayglo clothing. Why? Because Japan. 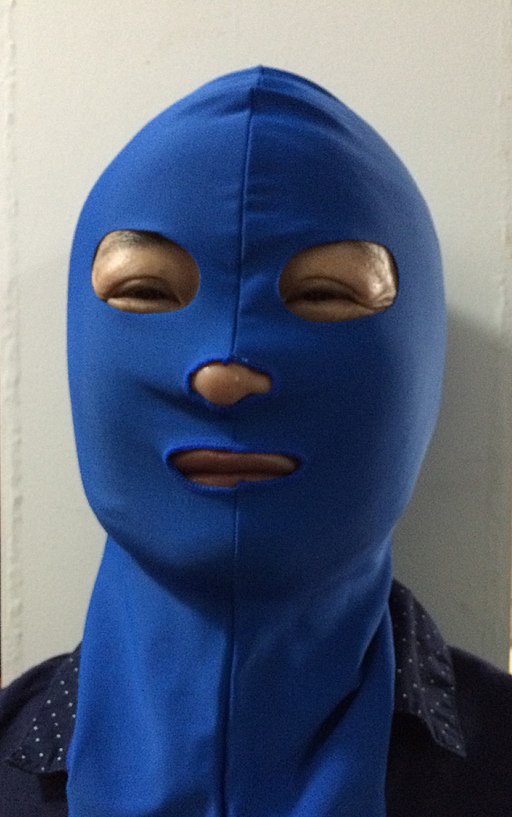 Speaking of classical beauty aesthetics from Asia… In China many women apparently prefer to avoid getting a tan because their culture still associates it with manual labor which is… something to be ashamed of, I guess? Wait, isn’t China supposed to be communist? What gives? Anyway, yeah, tans in China = bad, but “going to the beach” = good, and thus… the facekini. Tada?

A clever (read: terrible) play on the word bikini, the facekini has proven itself a hit among the female beach goers on the East China Sea coast. Though it may look like a Halloween mask you find during a sale at the dollar store, the facekini is today an integral part of typical swimwear in China, as common as a swim cap or swimming goggles. Also common in China in a couple of years: child therapy sessions for kids suffering from night terrors involving face-less, anthropomorphic sea monster. 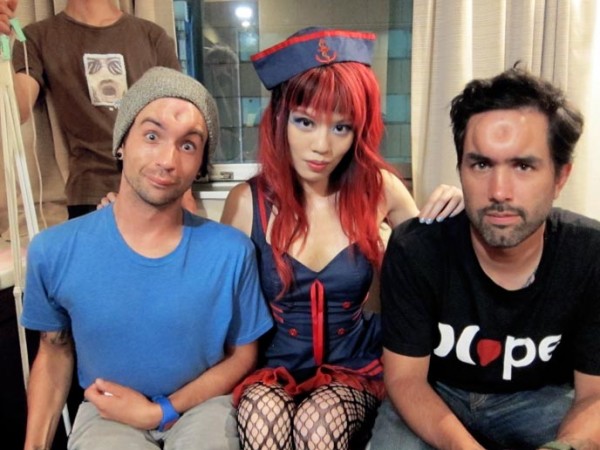 Look, I know that injecting saline into your forehead to make a sort of donut/bagel shape is only popular among the body mod crowd in your country but on the other hand THIS ENTIRE SENTENCE. Admittedly the bagel forehead is only temporary as the saline eventually gets absorbed into the body but the fact that more than 1 person has ever tried this, willingly no less, is still keeping me up at night. The obvious question isn’t even “Why?” but rather “Why a bagel?” I mean, I get piercings and eye tattoos but a bagel on your forehead? Why not a star, or a cross? Did I miss something? Is this a clever meta-reference to the Simpsons? Is it some incredibly sophisticated Anti-Semitic slur? Someone help me out here please…