The Celts are an often misunderstood and overlooked people. Originating in Austria (circa 1000 BC,) their culture spread to cover much of Western Europe and even broke into the Middle East. The ancient Greeks envied their wealth and the Romans feared them. These people were highly skilled warriors, were master blacksmiths, and their art work was widely renowned and admired by the ancient world. This list serves as a testament to some of the more unusual and intriguing Celtic treasures, both from battle and from peacetime, which have been unearthed by archaeologists. 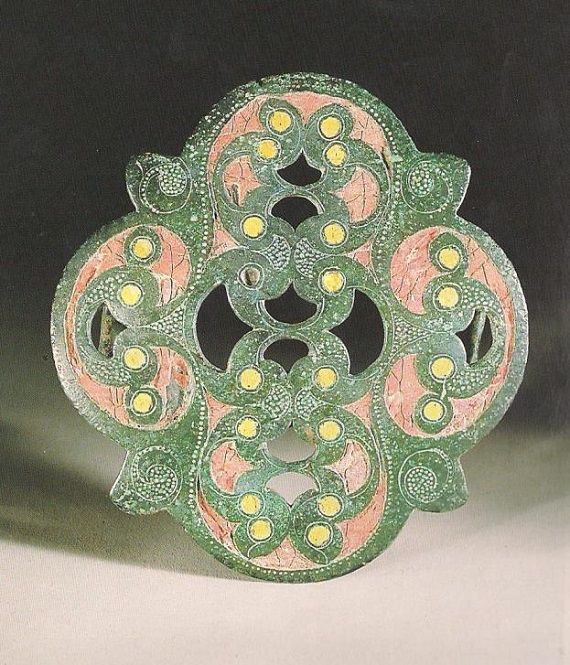 This ancient brooch from a horse’s harness dates to the 1st century BC. Very striking, it perfectly displays aspects of what is termed “la Tene” art. This artistic style is recognized by sweeping curves and abstract human/animalistic and plant life depictions – you can probably make out faces in this piece.

Due to the Roman hatred for the Celts, we are often lead to believe that the Celtic peoples were backward with no real advances in technology. However, recent studies suggest that the sweeping curves present in most la Tene artwork would have required a great understanding of mathematics and the use of intricate tools, such as the compass.

The green patina on this brooch indicates that this was made from a bronze alloy. Inlayed with red and yellow enamel, it is argued by some that this enameling was in fact developed by the Celts, and then later adopted by Roman

blacksmiths.  Originally it was thought to be French, as it was discovered at a site near the Oise; however, after chemical analysis, they discovered that it was in fact crafted in Britain, and shares similar traits to that of an ancient mirror discovered in Desborough.

It is often said that battle and warrior status was intrinsic in the Celtic way of life; the ancient Roman historian Cassius Dio notes that drinking and fighting were two of the Celts Biggest passions. This beautiful shield, dated to the 4th century BC, is where the warrior mentality meets art. Discovered in a river near Witham, this ceremonial practice dates back to the Bronze Age.

Originally this shield depicted a boar made out of leather, which was riveted to the frontispiece. Again we can see examples of sweeping La Tene artwork, with animal and plant like art work.  This ornate shield is unusual for the UK, as it was a practical piece actually used in combat, unlike other shields which were more ceremonial in nature. The Witham shield was backed with wood so it could withstand the onslaught of battle. The shield is inlayed with red coral, probably from the Mediterranean, which is particularly unusual for British artifacts, as coral was very rare, and glass tended to be used as a substitute.

This cockerel brooch is one of two items from the Reinheim Chieftains grave near Saarbrucken Germany. The metal work here is so magnificent that you could almost mistake it for a modern piece. Crafted from bronze, this piece would have fastened a tunic together near the shoulder/clavicle.

Unusually, the interred body was that of a female; these graves are usually occupied by males, which raises interesting questions about the relationship and equality between men and women during the Celtic era/Iron age.

The combination of high art and warrior practicality can be seen in almost all examples of Celtic weaponry. Celtic swords often had elaborate handles, and beautifully adorned scabbards. This spear head, probably from the 2nd century BC, was discovered in the river Thames in London. Forged in a leaf shape from iron, this spear also has four decorative bronze strips, with La Tene spirals. This weapon would have been utilized by Celtic charioteers, who were supposed to scatter troops. Unlike Roman weaponry, this was designed to be re-used, and was not a throwing weapon.

Curiously, you may notice that the left-hand side of the blade has very little wear – the damage on the right side was caused by oxidation and corrosion brought on by the watery environment it was found in. Because there is no sign of battle damage, this spear may have been for ceremonial use, and it could have been crafted simply to be placed in the river as a votive offering to the Celtic gods. 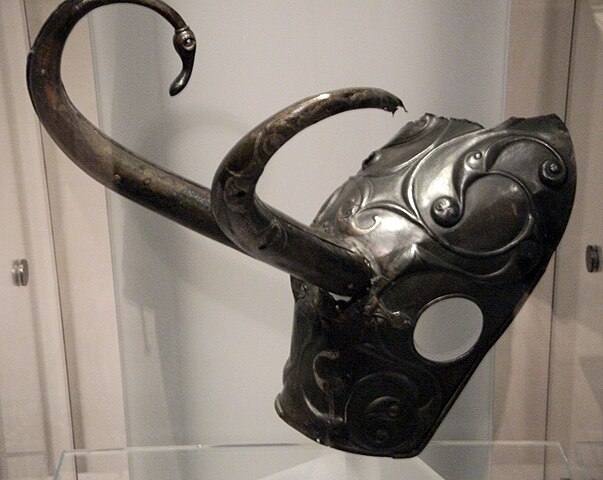 For the Celts, another symbol of warrior status was the ownership of horses – horseback and chariot combat were often utilized in Celtic warfare. This “Pony” mask, dated to 200 BC, is decorated with an elaborate La Tene swirling pattern, created by hammering in the pattern from the reverse. It was discovered in a peat bog at Torrs Farm, Scotland, and has been a much debated artifact since its discovery in the 19th century. Archaeologists believe that the horns were initially drinking vessels, which were attached to the armor at a later date, thereby combining beer and violence, two of the Celts’ favorite things.

Archaeologists believe that this was a sacrificial or votive offering to the underworld, particularly as it was found in a quagmire. The practice of interring artifacts in watery sites dates back to the Bronze Age. A very famous site known as flag fen was also a peat bog; thousands of artifacts had been deposited there in a ritual fashion similarly to this mask. Often the votive objects would be broken; this in particular was discovered with the horns, which were detached purposefully. After its discovery they were reattached, but the wrong way around, as the curls should be pointing outward. 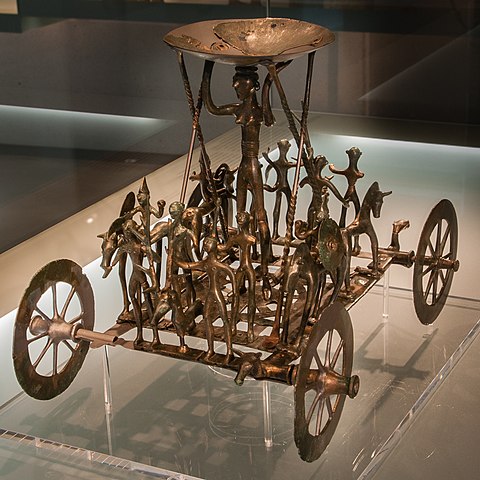 Moving on briefly from warfare, we can now address the Celts’ other great love – drinking! This ceremonial chariot, standing just over 23 inches, was unearthed at the Strettweg burial near Judenburg in Austria, and dates to circa 600 BC. Unlike many of the other objects on this list, this is an older form of art work, with more abstract anthropomorphic/zoomorphic art.

The central figure, a woman with outstretched arms, is a common motif in Celtic art forms. She is accompanied by an entourage of warriors and revelers. It is widely accepted that a sacrificial scene is depicted here, and many scholars agree that the vessel was for taking libation of wine. It is also widely believed that these feasts were held by tribal leaders to showcase their wealth and power; you can easily imagine this as the center piece of a great feasting table, and is definitely worthy of its place in the chieftains’ grave.

Throughout the Celtic era, we find examples of burial mounds or tumuli; these are thought to have housed the chieftains and upper echelons of society. Many of these, over time, have been robbed for their valuables. The Hochdorf burial is one of the best-preserved examples of a chieftain’s burial ever, with dozens of pristine Celtic artifacts including a 400-gallon Greek Hydria, which was used to store mead.

Among the collection of drinking horns, jewelry, and numerous other high-status artifacts, archaeologists uncovered these golden plates which were originally attached to leather boots. You can see the intricate patterning, and even the loop holes where the laces would have passed through. The lack of wear on the plates suggests that these boots may have been made for the funeral of the chieftain, rather than worn by him in life.

For the Celts in the British isles, their connectivity with mainland Europe was integral to their ability to trade; for these “Atlantic Celts,” seafaring was an important part of life. In the 19th century, the Broighter hoard was disinterred in Ireland; along with a gallimaufry of different golden objects was this beautiful auric ship. Archaeologists suggest that this was a copy of the ships being used at the time.

At almost 7 inches long, it could almost be considered an elaborate toy. It comes with oars, benches, oarlocks, and a selection of tiny maritime tools including: a mast yard, a steering oar, a grappling iron, and squared oars. It is believed that this boat was buried as a gift to the Celtic sea god, to allow for safe passage to mainland Europe. Whoever dedicated this model must have had significant wealth, as 85 grams of solid gold went into the boat’s construction.

Though this treasure may appear somewhat superfluous compared to others, though it is what the ship tells archaeologists that makes it truly valuable. Until its discovery, many archaeologists assumed that the Romans had brought wind-powered ships with them to Britain. With the discovery of this boat though, we can confidently say that not only did the Celts develop this technology independently, but it may have been around centuries longer than previously realized.

This exquisite example of Celtic art was discovered at its namesake in West Germany. As part of the Moselle grouping of rich burials, this hemispherical bowl is a paragon of La Tene artwork. A gold façade of intricate sweeping designs repeats itself around the entirety of the bowl, and the bowl itself is crafted from bronze with a wooden insert, which has since rotted away. The sheer level of craftsmanship required to attain such symmetry would put the goldsmith on par with some of the ancient artists and metalworkers from Greece or Rome.

Information on this particular piece is very sparse, and many of the texts have not been translated into English. It would seem, however, that this may have been used as a drinking vessel. Often feasts were put on by the social elite, perhaps as a way to solidify their power, so by having elaborate feasting wares, the leaders could show their wealth. 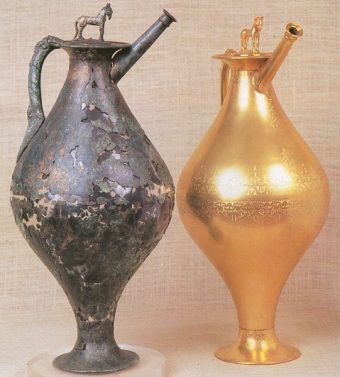 Another addition from the Reinheim Burial, this flagon, crafted from bronze, dates to 400 BC. Standing at just over 19 inches tall, the vessel is decorated with very fine and unusual patterning. The mythical beast on the flagon’s lid is perhaps a zoomorphic god, as the amalgamation of animal and human is prevalent in many Celtic deities. The deity depicted here has a beast’s body with a human head. The face of the creature has widened eyes with a long beard — it has been suggested that these widened eyes are supposed to symbolize the eyes of druids who took various herbal drugs to induce visions.

Previous ArticleMeet AKB48, the most popular music group you’ve never heard of.
Next Article Why the Simpsons are the worst average family ever.